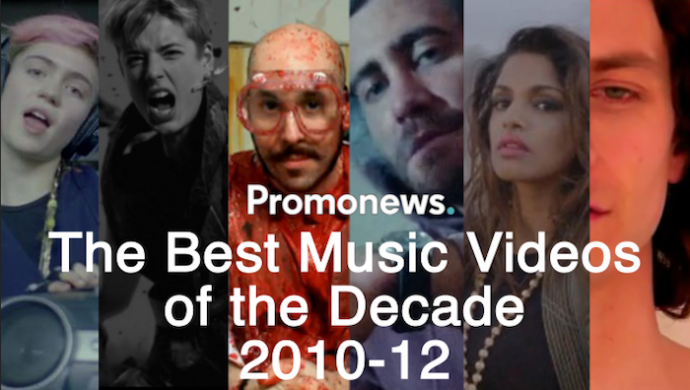 As 2019 draws to the close it's not just the end of another year, it's also the end of a decade. So what were the outstanding music videos of the past ten years, the 'Twenty Tens'?

We have been mulling it over for a while. And now, here is the Best Music Videos of the Decade (the 2010s) as chosen by Promonews. And we have started our list with the first three years of the decade, from 2010 to 2012.

This was a time when a new generation of talented filmmakers honed their craft in music videos before going on to other, bigger things - Romain Gavras, DANIELS, Emily Kai Bock, Fleur & Manu, Megaforce, CANADA, Daniel Wolfe, and others. Looking back, it's clear and obvious the medium was regenerating itself during this period, after what was arguably a decade in the doldrums. The arrival of YouTube gave music videos a creative impetus in the latter part of the Noughties, and at the beginning of the Tens, there was something of a mini-Renaissance. With creative licence to express themselves, the new generation created some remarkable work.

In creating this list, we have followed criteria of creativity that would apply when judging the UKMVAs or other creative awards. But we have also acknowledeged some gamechanging viral smash hits. in most cases, we've also added a quote from the text that was written when these videos were first featured on Promonews.

We're also open to suggestions to adding more from these years - DM us on Instagram (promonews.tv), with your suggestions for 2010-12 - and later years of the Twenty Tens.

We wrote (in Jan 2011): "this classy promo has some nice touches throughout, including some Jurassic Park-style water ripples masking the kick drum and a nice bit of slow-mo on the dancer in the white powder, all building in intensity to suit the escalating soundtrack."

This was the first video that brought Barcelona-based collective CANADA attention outside of Spain, for the producer who a few years later would help Rosalía break out as an international star.

We wrote: "L'Ogre have fashioned brilliant 'live' versions of some of the best-known paintings in the history of art, by Leonardo, Michaelangelo, Rembrandt, Van Gogh, Picasso and many others - featuring the members of the band... although made for the cost of a few plates of steak-frites, has been executed with a wonderful combination of painstaking accuracy and creative licence."

We wrote: "The band got together with art and technology collective Syyn Labs to design and build the intricate Rube Goldberg contraption that is the centrepiece of the promo. It took months to complete, in a two storey warehouse in Echo Park in LA, then a few minutes to smash it all to bits. Luckily, they filmed it - and it's the gobsmacking-est thing since... they hopped onto those treadmills.

The third part of groundbreaking series of videos for Plan B's Strickland Banks album by Daniel Wolfe, we wrote: "Following on from the courtroom drama-musical of She Said, Prayin' finds the South London rapper slung in jail. It's brutal and frightening, grittily real - but also shifts, quite brilliantly, to moments of fantasy."

CANADA said: "The new Battles music video is an innerspace freeform journey to what goes on inside a melting ice cream cone, as seen through the eyes of a nineteen year old girl enjoying the clash of hot and cold in her brains and body while seated inside a bathtub licking some chocolate."

We wrote: "It starts with their preparations, and climaxes at an illegal rave in a warehouse somewhere in the north of England - and the aftermath. To say Daniel Wolfe is on a roll is a bit of an understatement - Caitlin Moran has called him a "fucking genius". He's certainly bringing a tear to the eye of many an old raver..."

Why is this early video by Fleur and Manu in the Best Music Videos of the Decade? If you watch to the end, it's a no-brainer.

One of the reasons why this song by an unheralded Australian artist became a global smash was the powerful video created by Natasha Pincus, incorporating stop frame animation and body art by Emma Hack.

Is Tropical - The Greeks (2011)
Directors: Megaforce

Nothing simple about this video, which won Video of the Year at the UKMVAs in 2011. One of Dan Scheinert and Daniel Kwan's greatest achievements.

We wrote: "Yoann Lemoine is making a name for himself as a director, but he is also the recording artist known as Woodkid, and the bombastic Iron is accompanied by a stunning video featuring a cast of muscular warriors – and model Agyness Deyn – in a modern-medieval warzone beautifully captured in black and white."

We wrote: "It's hard to make a backwards video that does something new. And that's why this one by Ellis Bahl for Breezeblocks by touted new band ∆ (or alt-J), is more than a bit special."

We wrote: "Fleur and Manu revisit the levitation found in the Midnight City and Reunion vids for M83, but here they happen during the course of a one-shot where the camera happens upon an astonishing ceremony in a forest... it took two hours to shoot in three takes - followed by three months of post production to create the beautiful effects of human weightlessness."

We wrote: "DA's usual badass machine-gun Afrikaan hiphop this time comes with a bit more in the way of storyline and (completely believable) Ninja and Yolandi characterisation - plus an awesome car stunt that makes the 'drifting' in MIA's Bad Girls look a bit ordinary."

We wrote: "This film, featuring clips from three tracks from the album, is an unique and wholly poetic vision. It's beautifully photographed, on 35mm, by Matthew J. Lloyd - and features the considerable talents of dancer Storyboard P."

We wrote: "the track gets re-worked with Nabil's incredibly cinematic and leftfield visuals following Frank on his woozy journey towards the Pyramid..."

We wrote: "It's already been described somewhere as an instant classic, and we are not inclined to disagree with that assessment... it's frankly awesome."

We wrote: "Its full-on, blockbuster action all the way - and a distinct change of direction from Canada's prevalent music video style of the past year."

We wrote: "Bad girl M.I.A. is back with bad boy Romain Gavras for Bad Girls, and it's an awesome, beautiful, horizon-widening, spectacle. Beamers driving on end, boy racers in keffiyahs, mind-boggling stunts, skidding blow-outs, silky dancers with AK-47s - and Arab stallions in full gallop... smashes a stereotypical Western view of the 'Middle East'."

For a while he was the biggest thing on the planet and it was all down to this supreme example of the K-Pop video genre; became The first video to breach a billion views on YouTube (now on nearly 3.5 billion).

We wrote: "An eight-minute American Psycho-style rhapsody of mayhem... It's poetically bleak stuff as we follow [Jake] Gyllenhaal's path of destruction through the icy city - shot by Robbie Ryan, and edited by Tom Lindsay."

And so to our final part of our look back at the decade that is about to pass into history. This takes in the final four years of the Twenty Tens, and our list shows how this period started …

KC Locke directs another cracker for AJ Tracey, capturing his superstar lifestyle in a …