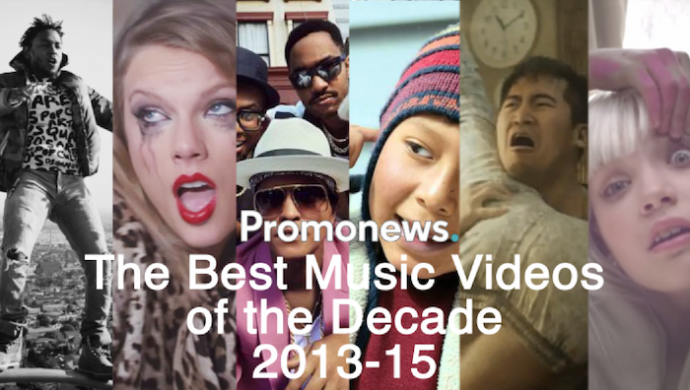 Some of the directors who had established themselves through music videos in the first part of the decade made their biggest statements in the medium during this period, while directors like Hiro Murai, David Wilson and Ian Pons Jewell started to make a huge impact. And as the reputation of music videos reasserted itself in the mainstream there was the big pop culture phenomenons from Miley Cyrus, Taylor Swift and others.

In creating this list, we have followed criteria of creativity that would apply when judging the UKMVAs or other creative awards. We've included personal favourites, but have also acknowledeged some gamechanging viral smash hits. In most cases, we've also added a quote from the text that was written when these videos were first featured on Promonews.

We're also open to suggestions to adding more from these years - DM us on Instagram (promonews.tv), with your suggestions for 2013-15 - and the earlier and later years of the Twenty Tens.

We wrote: "Relentless action and ultra-violence (possibly setting a bodycount record in a music video)... and most importantly, absolutely jawdropping stunt work, from the first person perspective."

Darwin Deez - You Can't Be My Girl (2013)
Director: Keith Schofield

"The pleasure is going through the process of realising that Darwin has been expertly comped in top-spec recently-produced stock footage... sensing that the footage is weirdly parodying itself... Unlike the singer's never-going-to-be-his-girlfriends, Keith and Darwin were made for each other."

"Intoxicating tour de force of arresting imagery, with an enigmatic continuing thread - a golden gauntlet that turns up on the fist of a various members of a mysterious, powerful clan... hypnotic."

"What appears to be the start of a narrative as the skateboarder, played by Chris Chann, jumps onto his board and heads off, turns out to be simply about the journey itself... it becomes all about the absorbing visual enjoyment of the journey – and the Zen-like demeanour of the skater."

"Miley gets naked on a said wrecking ball - quite an image, and indeed quite beautiful. But then, the real purpose is to arouse the audience, for good or bad."

"A combination of the song and the little boy’s ear-covering and ‘la la la’s’ has already been a hit in Bolivia – with quite serious political implications. And it surely will not be long before it blows up over here too…"

"When a new CANADA video comes out, we're all reminded of this medium's possibilities. Their latest addition is certainly no exception. Masters of exploring layer upon layer of beautifully pure concepts, this video takes the idea of cool and weaves it into an ever-escalating performance by Phoenix, where every shot is like an act of one-upmanship over the last."

"Like a Jim Thompson novel directed by David Lynch, with a touch of Gaspar Noé's Irreversible, it strikes like a bowling ball... one of the most disturbing music videos ever..."

"How much fun can you have while just about keeping your clothes on?... Starring the infectious lunatic moves of DANIELS' very own Dan Kwan, the snake-like contents of his track bottoms, a brilliant cast of characters, mayhem, destruction - and dancing boobies."

"Two children - presumably the innocent victims of gang violence - rise from their coffins at their joint funeral... the congregation are oblivious, but the boy and girl are not exactly ghosts. Joyful and happy, they are very real, and this is more like a brilliant blend of two realities."

We wrote, after OK Go followed This Too Shall Pass with The Writing's On The Wall and then this: "Just when you thought OK Go must have exhausted all the possibilities of the insanely ingenious art-performance video... We're just glad that Honda got in touch, and showed the guys something they've been working on for a while... the Uni-Cub."

"The inspiration, as with much of their work, is the wonder of nature, and then turning it into something mind-bendingly fantastical. But Isaiah and Sean have taken an entirely fresh approach to this project: it's their first fully-animated video."

"Wolfe manages to create a video that is as distressing as it is beautiful. Insightful. Alarming. While others take what they’ve learned in music videos to features, he’s brought it all back; an earnest cinematic poetry that’s increasingly rare in our industry."

When Sia saw 11-year old Maddie Ziegler on a TV talent show and then cast her in her video for Chandelier, which she co-directed with Daniel Askill, it changed both their lives. Having given an extraordinary performance in this - choreographed by Ryan Heffington - Ziegler followed up with the nearly-as-iconic Elastic Heart, with Shia LaBeouf, and has stood in for Sia in many more videos since.

"Joseph Kahn does a typically masterful job seamlessly combining the glamour with the sarcasm and creating a 'bad Taylor' that is so over the top, so knowing, you feel she's still lovely underneath."

The climax of the run of videos that Hiro Murai directed for Donald Glover aka Childish Gambino is poighant and dreamy, a perfect showcase for the DG/CG persona, and a precursor for what they would do next with the TV show Atlanta.

"What appears bizarre, intriguing and threatening to start with, becomes increasingly remarkable."

Arguably the outstanding piece in The Odyssey, Haycock's video-cycle for Florence Welch's album High As Hope.

"We are immersed into Kendrick Lamar's hyperreal world, which casts the city as a bitterly oppressive environment that leads its residents to a life of vice, hustle and the pursuit of hope. But despite that, Lamar supplies irrepressibly positive energy."

"A video that follows an unsightly and particularly gluttonous Pacman-like creature on a consumerist rampage, reaching new outrageous extremes with each new animation style... Having said that, the stop-frame monster, with those horribly real-looking human teeth, is probably the best..."

"After the animated TV titles intro, the live action centring around a Doofus-like clerk sets the scene, before Karacas's extravagantly gory alien-revealing animation takes over..."

Tame Impala - The Less I Know The Better (2015)
Director: CANADA

"An absolute bobby-dazzler of a video. Sexy, funny, surreal, and very beautiful. And there's a gorilla called Trevor..."

As 2019 draws to the close it's not just the end of another year, it's also the end of a decade. So what were the outstanding music videos of the past ten years, the 'Twenty Tens'?

And so to our final part of our look back at the decade that is about to pass into history. This takes in the final four years of the Twenty Tens, and our list shows how this period started …

Harry Law documents a return to house parties, in his fun-filled promo for HYYTS.