Best of 2017: Promonews' Favourite Music Videos of the Year 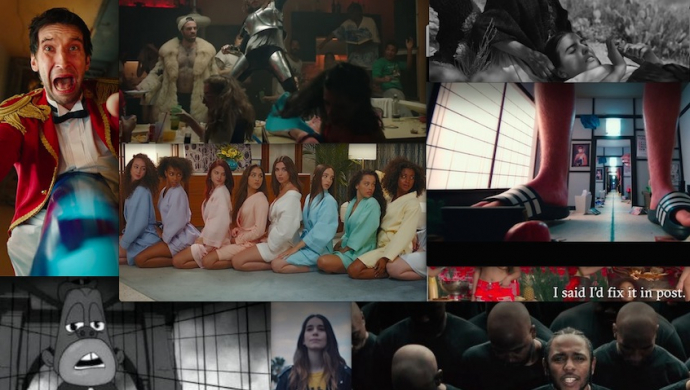 You know it's the one you've been waiting for. David Knight and Luke Bather take you through Promonews's pick of the best music videos of 2017, in alphabetical order. And what an amazing year it's been...

Eoin Glaister’s second trilogy of 2017 was a distinctly British tale told in a brilliantly deadpan way. Animal was the world builder of the three and really shone a light on the hilarious strangeness that you can only find in tiny British villages. LB

Young Replicant’s cinematic, monochromatic death march does the impossible by making the best Alt-J video since this one. It’s absolutely gorgeous, brilliantly paced and steeped in religious symbolism. LB

A modern Joan of Arc dons her armour to undertake a daunting mission in one of the most hostile and challenging environments known to man - the teenage houseparty. Barcelona-based Canada's return to music videos was typical of them - imaginative, brilliantly art directed, a triumph. DK

Territory is honestly a masterpiece. A gorgeous, unrelenting, confident and empathetic portrait of European migrant communities told from a place of pride, celebration and understanding. You won’t find any dwelling on misery or cheap pulls of the heart strings here – just powerful storytelling courtesy of scenes so effortlessly blocked and choreographed it feels like watching a ballet. LB

An absolute mind-bender of practical effects bringing an incredible metaphor for loneliness to the screen. A huge production undertaking - as Oscar Hudson explained to us, it was achieved wholly in-camera – with a hugely rewarding end result. LB

Jake Schreier takes something poignant and makes it funny, and then makes it poignant again, in this great fake TV-style duet between Chance The Rapper and a big puppet. DK

Look at all those famous sexy boys! Look at them! God, it’s all so wholesome. Just LOOK. Really though, this video manages to be a lot of fun whilst subverting the done-to- death video trope of objectifying a parade of women and that’s worth the price of admission alone. LB

An extraordinary and hilarious video, channeling some classic influences (Lynch, Wareheim, etc) into a triumph of lurid pop art, by a rising star of photography and film, Nadia Lee Cohen. DK

A beautifully designed, cast and styled production number in three acts, with on-point choreography and continually inventive camerawork - pretty much what we've come to expect from Henry Scholfield. Only this time it was for one of the hits of the summer, and showed that old rules of entertainment still apply, even for New Rules. DK

Kyle Thrash takes you out of your hipster bubble and drops you into real America – Buffalo, NY in the bleak mid-winter to be exact. It's a relentless piledriver to convert you to the old-fashioned notion of long haired guys playing loud heavy rock music. DK

Father John Misty's merging of Tiny Dancer-era Elton John with the Apocalypse was rewarded with a marvellous stop motion-animated video by Chris Hopewell, who visualised an account from the other side of a great disaster involving one last human and his/her dead mobile phone collection, evading the clutches of beer-slugging cockroaches, with a trademark combination of exceptional craft and dry wit. DK

If a sign of a great video is that it somehow gets better each time you watch it, then Jake Schreier's video for Haim is a great video. This one-shot in Ventura Boulevard only happened as a result of a previous shoot, involving the Haim sisters driving down the same road in a car, being abandoned due to an on-set accident. No one was hurt, but Schreier ditched the car idea. They came back the following Sunday, and nailed it. DK

In some ways a divisive piece of work - with the older generation perhaps more uncomfortable with the imagery employed by Jay-Z and Mark Romanek than young people - but this beautifully crafted animation is the centrepiece of a thought-provoking set of music videos by Jay-Z focussing on the black experience in modern America. DK

Part sexy and part horrifying, more food imaginative than Heston Blumental, and reminiscent of a Peter Greenway film from the 80s, this was a brave and bold pop video indeed by super-talented French/Canadian duo Dent de Cuir. DK

This was an incredible year for Kendrick Lamar, and HUMBLE was the just about the standout video from DAMN, amid strong competition, particularly from ELEMENT - a tour de force of iconic set-pieces to contradict the message of the song, and burn in the memory. It was a hardly less remarkable 12 months for Dave Meyers, returning to music videos in a big way for the first time since the old MTV days, to make massive videos for Katy Perry and Camila Cabelo, as well as Kendrick. DK

To be honest it was just an absolute joy to see Kesha reemerge after far too long. Akerlund’s trademark huge, maximalist saturated visual style comes to the fore here and marks an important change in Kesha’s career. LB

The Lemon Twigs 'I Want To Prove To You'  Director: Nick Roney (released: February)

One of the funniest videos of the year - a comedy documentary, as opposed to a mock-doc – that also helped put the ridiculously talented D’Addario brothers, aka The Lemon Twigs, and director Nick Roney, on the map. Roney takes the brothers to stay with his grandparents (strict Mormons as it turns out, but still quite a happening couple) but it all goes horribly wrong. DK

A calamity of bloodshed and bad luck played out in reverse and pored over in forensic detail. Every single shot in this thing has so much going on that makes me feel lazy by sheer virtue of existing. It’s a hell of a lot to take in and rewards your attention with every rewatch. Plus there’s a tiger. LB

Sometimes all it takes is looking at something through somebody else’s eyes to realise just how strange it is. Marczak’s hauntingly simple video shows the mundanity of the everyday through the eyes of a discarded android head as it gazes out of the window on a wandering city bus. Gazing out from the uncanny valley beautifully illustrates the idiosyncrasies of being human. LB

Words can’t really describe this video, or how much I love it. It’s so willfully bizarre and unashamedly disgusting but somehow still manages to look great, and even features a famous face. The birth of man never looked so deliriously odd. If this is what creationism is, then sign me up. LB

Aesthetic with a capital A. Pop-art inspired visuals, an incredible colour palette and a swan(!) Alex Da Corte’s video is a great performance celebration that is artfully strange, strangely artful and completely otherworldly in its execution. LB

Taylor Swift 'Look What You Made Me Do' Director: Joseph Kahn (released: August)

Maybe not the best of the year, but certainly this was the music video event of the year, premiered at the MTV Video Music Awards, anaolysed shot by shot across the media, and breaking the record for the most viewed video in its first 24 hours of release on YouTube. DK

Everything that could possibly be said about this video has very much already been said. A lot of it was said in my interview with Ryan Staake, one of many he did upon this video’s release (no need to go into the reasons why, it's obvious). It's absolutely hilarious unless you’re in the business of making music videos, in which case this is the scariest horror movie of 2017. LB

And so we get to the real toughie in our round-up of the year. In fact, it was so difficult to choose our favourite videos of 2015, and keep it down to a reasonable number, this year we decided …

We begin our review of the music videos of the year with our choice of the best animated videos of 2019. As ever, there were some remarkable applications of animation in this year's choices.