Behind The Video: Dir. Lx on DC's 'Tears, Sweat, Blood' 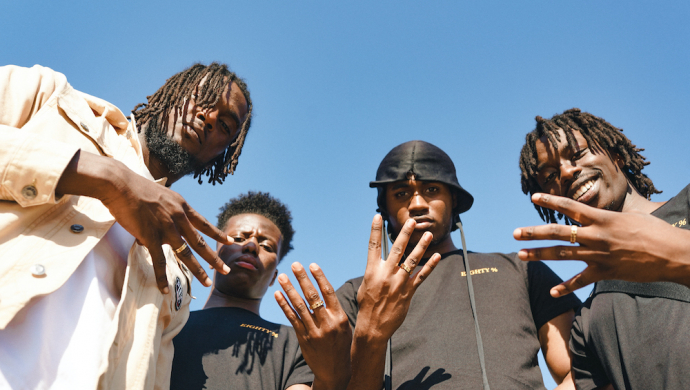 A prime example is the just-dropped video for DC's Tears, Sweat, Blood. It's his second video for the South London grime artist, following Neighbourhood earlier this year, and arguably his most sophisticated work yet, with the charismatic DC squarely at the heart of some intriguing set-ups.

We talked to Lx about the making of the video, shot on a very hot day in June, under strict guidelines necessitated by the pandemic crisis.

DC has a strong and distinctive presence in this video. Is that something you wanted to emphasise after your previous experience working with him on the Neighbourhood video?

Definitely, my main aim was to make this video a level above what we were aiming for creatively with Neighbourhood. If you ever meet DC you’ll realise that he is quite understated in his nature, but his presence is always felt. So I wanted to bring that across in the video in a way that kept it authentic to him.

For example, with the umbrella scene, it’s very direct in its meaning and link to the track. I wasn’t sure DC would buy into it but we had a discussion and he was into it. The styling helped too, so shout out to him and [stylist] Daisy Deane on that - a great job.

DC is quite understated in his nature, but his presence is always felt.

What was the main brief from DC’s team, and what were the main subjects of conversation before the shoot?

There wasn’t a main brief for this per se. DC hit me up, like he usually does, with a fire track and said he wants something artistic but mentioned he’d like to keep it feeling British. It's funny mentioning that now because some scenes in this video could be anywhere, but I think we both like the fact that it’s not geographically set in that regard.

He’s very creative himself, so usually he’ll send references/ideas he wants to implement and I'll do the same and from there we just bounce off each other creatively. I feel we work well like that.

I don't think there were any main subjects of conversation before the shoot. Myself and DC were just excited to get going and see how these ideas would look.

We just bounce off each other creatively. I feel we work well like that.

Were the composed, almost photographic set-ups influenced by the issues surrounding post-lockdown shooting?

Actually no, but I can see why you’d think that. They were influenced by DC’s lyrics and how I felt the track made me feel listening to it. Watching and working with DC over time his videos always have this underlying theme of family/community. That definitely influenced the composed shots.

Who and what were your references when creating the moodboard for the video?

One of my references for this video was from a campaign for a brand called Daily Paper, which inspired the opening shot of the video. I recently did research and found out that the originator of the idea was a director called Jenn Nkiru. The rest of my references came from a variety of sources, focussing on the themes of tears, sweat and blood.

DC's videos always have this underlying theme of family/community [which] influenced the composed shots.

When and where did you shoot the video? Did all the set-ups work as you planned? Which one(s) are you particularly happy with?

The video was shot in late June. I can’t say the exact names, but we shot in a warehouse and then a place that shall not be named, both in East London.

All setups didn’t work as planned. We had two scenes that we left on the edit floor. One was dropped because we realised it just didn’t sync well with the rest and the other one was left because it just wasn’t what we envisioned - a classic case of Time vs Execution.

But I’m extremely happy with how the setups turned out in the video. The set up I’m particularly happy with is the umbrella with the rain. It’s the little things that do it for me like the tiny droplets on the umbrellas which grab your attention due to Sam Meyer’s fantastic vision for lighting.

Little things do it for me like the tiny droplets on the umbrellas... thanks to Sam Meyer's vision for lighting.

How did the shoot compare to other ‘post-lockdown’ shoots?

This shoot was a lot of fun. I always have that nervous energy in me at the start of the day just waiting to see my ideas realised but they came out well. Was the hottest day in June, not a cloud in the sky which wasn’t great for some of our shots.

Compared to other post-lockdown shoots this had a lot more planning involved. A big big thank you to producer Natalie Steiner, EP Kareem Adeshina and Greatcoat for doing a fantastic job pulling this all together. Almost forgot to mention, thank you Jade Mortimer for your stupendous art direction.

You’ve also incorporated subtle VFX in this and the previous DC video. Is that something that’s becoming an increasing feature of your work generally, or does that particularly work for DC?

Yes it is. I’m a big fan of having VFX in my videos. I think it adds an edge, or as some say “sauce”, lol. I think this stems from my love for sci-fi films. The lighting, VFX, etc, just takes you to another world. That’s what I want my videos to do.

I'm a big fan of VFX... which stems from my love of sci-fi films.

Likewise, it’s an interesting edit, a combination of measured slow shots, quick cutting and glitches. How much is that planned before the shoot, or does it happen more ‘organically’ during post production?

For me, it happens more organically during post. Though we planned to make sure shots would breathe, that approach didn’t fully work. So I took over the edit and got stuck into it. You have to feel the vibe of the song in the edit sometimes and that’s what we needed to bring to it. That was different to what we envisioned would work.

Most times I won’t take a break until I have a solid first edit which is close to the final edit. I’m glued to my screen making sure each shot sits right and compliments or makes the track better. That's when you know you have a banging edit.

• Dir. Lx is with Greatcoat Films and represented for music videos by Andy Roberts at Las Bandas Be Brave.