Eamonn Hearns directs a dark narrative promo for Benny Smiles. The concept of the video follows a bloody revenge story, interweaving themes of obsession and violence with a vibrant Giallo film aesthetic. Cutting between a lusty one night stand - with a hazy, dreamlike style - and the main character hunting down her love interest, it's an intense, unflinching look at obsessive love, and the gory consequences that come with it. 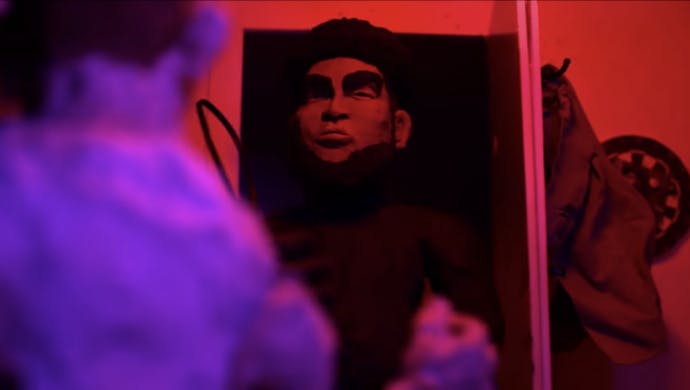 Big Zuu, JME and Novelist mete out some revenge on their haters in Edem Wornoo and Claymation maestro William Child's collaboration for Offline.With the track directed at the internet trolls who have doled out abuse online to each artist, Wornoo and Child have created a visual that allows each rapper to find their own chief tormentor and deliver some justice, in full-bodied Claymation-style. Wornoo developed the concept for the video, and then brought it to Child's studio, Gravy Mercedes, in Bristol, to bring it to life. It's the first time they have worked together - indeed the first time Child has co-directed a project.“OTT violence is always a lot of fun in Claymation," notes Child. "And it feels like a great medium to reflect Zuu, JME and Nov’s performance personas as funny, chilled guys....until you f*ck-around-and-find-out that they don’t take insults lightly.”OTT violence is always a lot of fun in Claymation."This video is a homage to a time before we could hide behind screens, a time when words and actions held consequences," says Wornoo, adding that Child's attention to detail during its production was something to behold. “He should have his own TV show because every time his Claymation brought one of our scenes to life I genuinely laughed out loud.”The video shows Child leaning into Wornoo’s 'street level fantasy' incorporating luminescent lighting that adds a somewhat dream-like quality. In addition, with the help of DoP Luke Harper and compositor Harry Davidson, the video features live action footage interspliced on TV screens in the stop-motion world, recorded on a FLIR thermal imaging camera, with its own punchy in-camera colour scale. The directors were able to bridge the two worlds harmoniously.“It was my first time sharing directing responsibilities with someone else, meaning a totally different workflow to that I’m used to," he says of the production which was created in both Bristol and London. “Edem is incredibly talented and the clarity of his initial vision for the video made it super easy to understand and then execute. Between Edem’s on- point notes and Ground Work’s meticulous production, it made for a great experience for my first time collaborating in this way.”

Willow Kayne takes on the social media opposition in the most entertaining way possible - courtesy of directing duo Bedroom - in the dazzling video for I Don’t Wanna Know.Bolshy Willow vents her fury on her online haters by launching herself from her own colourful bedroom right into the internet itself, blasting down the information super-highway to cause chaos and confusion - with some darkly comic results. Along the way, this gives Bedroom the opportunity not only to exercise their signature DIY approach to art direction and set design, but also Soren, one half of the team, has created the illustrations and animations that populate Willow's fantastic voyage of hilarious revenge. A wildly imaginative ride indeed.

Melody Maker embraces a slick, cyberpunk aesthetic in her gripping promo for Mahalia's Jealous, featuring Rico Nasty. Invading a former lover's mansion, decked head to toe in futuristic styling, Mahalia isn't here to play games. Stalking the overtly neon blue environment, she glitches in and out of reality, joined by US-based rapper Rico Nasty, who terrorises the guy through different TV screens spotted around the house. A true feat, this is Mahalia as you've never seen her before, and no doubt one of her very best videos. DoP Olan Collardy embraces the future-tech concept, and switches up the angles and camera movement at every possible moment, mirroring the frenetic, dreamlike vibe.

Revenge is on the cards in Labi Odebunmi's enigmatic promo for Ray BLK. Celebrating a sense of growth and empowerment following a breakup, the dynamic visuals feature BLK's mesmerising performance across several distinct setups. The styling and cinematography are suitably slick, and the ominous location adds a hidden layer of mystery to the concept.

The futility of violence, powerfully expressed in just 140 seconds, by Alexandre Moors.

Two videos for Alex Turner and Miles Kane's side project created by Black Sheep Studios - with Saam Farahmand at the helm - and its an intriguing Tarantino-eque two-parter, entirely set on a deserted Californian beach.Everything You've Come To Expect starts with the tragic-comic situation of Turner and Kane buried neck deep in the sand, while an emotional woman in a torn bridal gown looms over them. Sunset approaches, and the tide is coming in... Aviation is the prequel, offering the prior chapter to this tale of we can only guess, involves duplicitous love, betrayal and revenge. Turner and Kane are digging their own graves on the beach, ordered by the gangster groom, surrounded by armed goons, the guilt-ridden bride, and a blind-folded string quartet. Its dramatic, and operatic...

As it turns out, Disclosure and Ryan Hope's fourth and final collaboration for single Magnet is a self-contained video all unto its own, and not a continuation of the dystopian trilogy we saw for Holding On, Omen and Jaded.It sees pop queen of the moment Lorde unwittingly involved in a fiery love triangle with a wealthy man from Beverly Hills... but not for very long. Clearly, the New Zealand pop star is not to be messed with...

videoEllie Goulding 'On My Mind' by Emil Nava

Emil Nava and Ellie Goulding have joined forces for On My Mind, which sees the singer tearing up Las Vegas on horseback in an Americana-style story of revenge.Shot in classic locations such as vintage hair salons, hotels, trailor parks and casinos, Goulding continues the current pop star fascination with the Lana del Rey-esque damsel of the American West. When her affair with a wealthy casino owner turns sour, Ellie rides her steed into the short-tempered man's place of work to make sure she gets her money's worth.