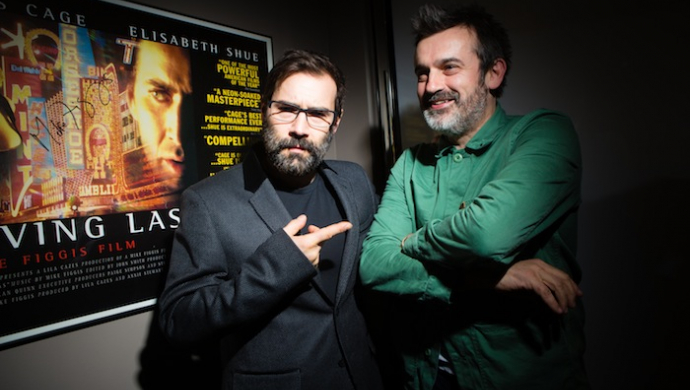 BUG's first show of 2015, on March 5th and 6th at the BFI Southbank in London, saw the return of Adam Buxton as host extraordinaire, with his distinctive observations about the selected videos - and the return of the much-loved YouTube comments section. There was also an excellent line-up of music videos, selected from the last few months of releases - and also a special guest: John Hardwick (pictured above, right, with Adam Buxton).

He started out in experimental theatre, but since the late Nineties, John has directed quirky, cherishable and iconic videos for the likes of Orbital, Travis, Blur, Hefner, Arctic Monkeys and Jake Bugg. And his most recent video for Noel Gallagher is a revelation, uncovering hidden qualities from a musician more resistant than most to the appeal of music video.

Other artists featured at BUG 46 included Royal Blood, Panda Bear, Childish Gambino, The Staves, Joywave and Skrillex, and a range of directors, from BUG regulars like David Wilson, Eric Wareheim and Fleur & Manu, to newbies like Jack Whiteley and Chris Carboni.

And the evening began with Keith Schofield's take on the skate video/videogame for Joywave, continued with Jack Whiteley's video The Staves and then Encyclopedia Pictura's video for Panda Berar, followed by some YouTube comments...

It was the month where England went closer to winning a football tournament than at any time in the past 55 years. Before, ultimately, not winning...

The pick of the bunch of the videos featured here last month is another bumper crop of smashing work - from Audiobooks to Zoe Wees, via Little Simz, Ed Sheeran, Griff, Iron Maiden, Charli …

It may be halfway through November, but it's not too late to have a look back at the fine videos we featured in October.