Ian Pons Jewell on Deep Down Low: "Valentino wanted something really out there" 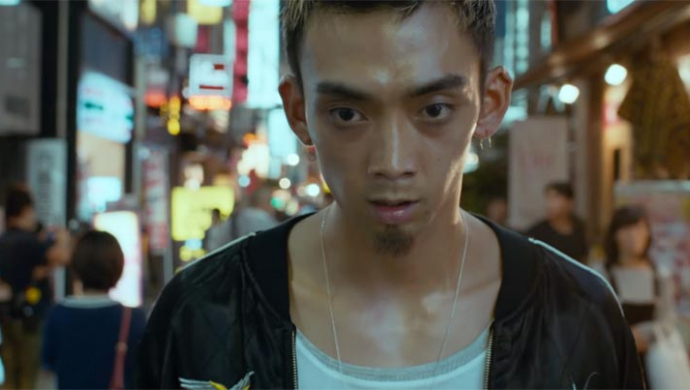 Ian Pons Jewell is peripatetic, making a habit of filming in all corners of the globe - from his important Bolivian career phase which included Naughty Boy's La La La, to shooting Vince Staples' Senorita in Los Angeles, and then NAO's Bad Blood in the Bulgaria. He even shoots in the UK from time to time...

Until now, his travels had not extended to working in Japan, but he's put that right with the Tokyo-shot video for Valentino Khan's Deep Down Low - a VFX-heavy kinetic visual comedy that has notched nearly two million views in its first week of release. It could become his most popular video since La La La, but as Ian explains here, he needed lots of his international contacts to help with the crucial VFX work...

PN: How did the job come about? Was this a track that inspired the idea or was this something you’ve been wanting to do for a while?

IPJ: Caroline Clayton [the commissioner] sent me the track and I had the rough idea on the first few listens. I could see these character's eyes shifting downward to the beat, and then things in the restaurant they're in also getting "low".

It made me quite anxious too. It's a dark track that gives you this particular rush, so that's where the idea of having all this stuff happen from the point of view of a guy who's been out clubbing all weekend. I've always wanted to make something based on a really horrific comedown, so it was the perfect chance.

Above: Ian Pons Jewell (right) on the set of the Valentino Khan's Deep Down Low video

It's not specifically about that though. It's read generally as a guy's terrible trip who just wants a glass of water. Maybe he's losing his mind, or he's taken something. The other thing I've wanted to do for a while, is to make something very rich and synced to the music. In general my videos ride the music, but this was a chance to follow the beat on a much more minute scale, rather than broader "brushstrokes".

It's why electronic music is probably the most exciting genre at the moment for me, in terms of making videos. The best music video ever made, in my opinion, is Rubber Johnny [by Chris Cunningham for Aphex Twin]. I aspire to make something one day that is that perfectly dictated by the music's rhythm. I find those videos so incredibly hypnotic.

"In general my videos ride the music, but this was a chance to follow the beat on a much more minute scale."

Did Valentino and OWSLA need much convincing? Did you have to lose even weirder stuff from the script?

Not at all. I'd spoken to the guys at OWSLA before and they were fans of my work which was quite amazing to hear. I'd pitched on a couple of things to them before that didn't work out. Valentino and OWSLA knew from the start they wanted something really out there that would grab you and take you for a ride.

The only thing they didn't want was my idea of seeing the skirt blow up in front of the camera when it comes out of from the intestinal journey. I wanted it to be quite clear we'd gone into her mouth, and out of the other side. This was a bit much, and I agreed it didn't need to be so obvious. But in the end, I think it's pretty clear. Daniel Terrazas from Rebel VFX did a fine job of creating that opening to the teary eye!

• Was this your first time shooting in Japan? What were the big challenges around the shoot?

It was my first time there in general, but it tends to be filming that brings me to countries on the first go anyway. It's really all down to Yukihiro Shoda, an amazing director in Tokyo and great friend. He invited me to co-direct a commercial with him, shooting in LA but editing in Tokyo. This meant I got to go there and meet his friends, crew and the other founders of NION, the new company I was invited to join. It was just a wonderful coincidence that I was going over there when I got the track.

Caroline asked where I was when she sent the track and was very much up for shooting in Tokyo - she has a similar gypsy lifestyle. The label were really trusting of her and myself, and happy for us to go ahead and do it despite the budget not allowing them to fly out there. We weren't sure if it would be affordable, but our producer Satoshi Takahashi is incredible and worked some miracles - it was NION's first production.

"VFX were done in various countries - which made it particularly difficult in post to co-ordinate."

One of the challenges – which was actually a lot of fun – was location recce-ing. I ended up quite drunk, because we couldn't just waltz into a place, have a look around, and ask if we could shoot. You can't do that there. So we had to go into a place, sit down, drink and eat, then ask politely at the end if we could speak to the manager. We went to a few places doing this.

Shooting there was wonderful, such an amazing crew, and Satoshi - now a great friend - was superb. I think it's probably possible to have difficulties with the language when you don't know people there, but everyone speaks English at NION, and I had an amazing assistant producer, Azumi Kotake who speaks incredible English with a slight Geordie accent having studied in Newcastle. She assisted me throughout, translating on set too, it was wonderful to work with her.  We had such a fun time out there, it was a really special shoot. I can't wait to go back.

It’s a very VFX-dependent video, so were you sure that all the moving faces FX would work? How long did it take to make everything perfect?

I was probably a bit over optimistic on the VFX working smoothly. After the first few passes we realised the eye movements weren't working in the style I wanted, so we had more work done on that. This was the most troublesome part. In the end, Ryan McNeely from Visual Creatures did a test to help us out, coming up with a more droopy/morphing sort of style to it which changed the direction we went in.

Brandon Hirzel from Bemo then took this part of the VFX on and re-worked this into the rest of them, adding the kaleidoscope eyes and really nailing it. Gloria VFX did all the blank face work and clean ups, with Alejandro Villavicencio Vargas doing the initial work on the end shot as a guide for us to go from.

"Valentino, OWSLA and Caroline were so patient and supportive of us getting the VFX right."

Finally we had Daniel Terrazas from Rebel VFX, also based in Bolivia, doing the incredible tentacle and intestinal journey VFX, which we realised needed to be full 3D. Originally we had filmed some tentacles to use but it didn't work. So the VFX were done in various countries in the end which made it particularly difficult in post to co-ordinate.

Can't thank them enough for the great work they did, they really nailed it. Also Valentino, OWSLA and Caroline for being so patient and supportive of us getting the VFX right even though it took much longer than it was meant to.

This follows recent FX-heavy vids for NAO and Vince Staples. Are you consciously tending towards more Post VFX work and away from in-camera stuff at the moment?

Not consciously, I've pitched work before that has had VFX work but never had the opportunity to work with VFX artists. Music video budgets rarely allow you to bring on VFX artists as you would a commercial. You have to have a relationship with them already, or have an idea that the VFX artist is really into, or present the project at a time where the post house has got time and is up for having one of their artists, or the whole company, work on your project for the love of it.

So I'm incredibly grateful to all the post houses I've worked with including The Mill who have been incredibly supportive with my collaboration over the years with colourist Luke Morrison, and his producers Laurie Adrianopoli and Samantha Letzler. I think once I did work with VFX more, it definitely opened this side of film up to me and meant that it's now in the back of my mind. But I've been pitching stuff that is totally in camera also, so it's something newer for me, but not a "conscious" decision.