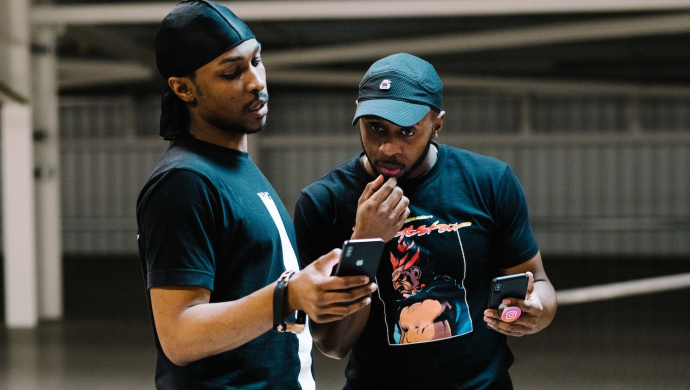 As the world started the indoor endurance test of lockdown in March, Matt Walker was just completing another marathon. For the previous few months, he had been working on a huge project with his close friend, the British grime artist Jme, making videos for numerous tracks from his acclaimed fourth album Grime MC.

This was not just a massive challenge for the number of videos that Walker (above right) and Jme (above left; photo by Jordan Hughes) were making. The rapper - real name Jamie Adenuga - is also now working outside the mainstream, without the backing of a major record label. As an outspoken critic of the methods of the music business, he chooses to be completely independent, creating and releasing music himself on his own label. This is an issue that artist and director have confronted this issue head-on in one of the ambitious videos they have made in their series - and crops a great deal in Jme's fiercely polemical work.

In that respect what the pair have achieved is even more remarkable: a body of work that showcases the artist's personality, brilliant rhymes, uncompromising viewpoint - and sense of humour - through a range of creative ideas, and made on shoestring budgets. On most of the videos, Walker has taken on multiple roles during production to get them across the line.

The project comes to an end with the release of Live, the final, most ambitious, and arguably most impressive video of the whole series. In this video Jme and guest artist Merky Ace play the anchors on a rolling news channel, cutting to various unfolding news stories. - who also feature Jme and Merky in other roles...

We talked to Matt Walker about the challenges of making this series of music videos, and bringing the full measure of Jme, the man behind the message, to his legion of fans.

Hands down he's the best artist I've worked with.

How many videos have you made now for Jme’s album Grime MC?
In total we shot eight videos. There was an ambitious plan to shoot a video for all 18 tracks on the album, but I didn't want to bankrupt him.

Was it always a plan to make a series of videos for the album?  And if so, how did the project start?
As any Jme fan will know, he is anything but conventional. After the previous album Integrity > I think he was just making songs for the love of it, with no intention of even making an album. He did want videos though. So he would call me up and we would just vibe to the tracks he had made at his house. I’d pick one that I like and then we’d just go and shoot something. I don’t think we were even counting.

Does Jme’s position as an outsider to the established system make it easier or more difficult to make the videos? Presumably you’ve been working on tight budgets throughout?
Of course working outside of the industry machine drastically limits the budgets we have to work with. We always have big ideas that are often not possible to execute. On the other hand, the freedom and collaborative nature of the projects far outweighs the cons of budgetary restrictions. Although I often find myself feeling guilty when I have to ask him for money on these projects, knowing it's coming directly from his current account.

The plan was to shoot videos for all 18 tracks, but I didn't want to bankrupt him.

You obviously have a strong working relationship with Jme. What’s the usual process for coming up with ideas for the videos?
It really is pure collaboration. We go back and forth on concepts so often that by the time we start shooting, it's hard to remember who came up with the ideas first. That does lead to fun arguments sometimes when it comes to taking credit though.

The songs have these trenchant lyrics but the videos also contain humour and satire. Is that a reflection of Jme’s character? What is he like to work with?
I truly believe he gets all his frustration and angst out in his music because you never sense it much in his personality - unless we are having a group debate. On set, I challenge you to find a single crew or cast member who has a bad word to say about Jme. He is hands down the best artist I’ve worked with.

He’s always on time, hilarious, extremely enthusiastic and loves people, so is always keeping the SAs entertained. He’ll do a million takes without a complaint if we needed it. Sometimes I think I take that for granted in our action scenes, I run him ragged.

Pricks was approached more like a short film, which I've always wanted to do.

Videos like Issmad, Here and You Know are studio-based, then it gets more ambitious with the likes of Nang, with its fantastic drone shots, and the action-packed Pricks. What were the main challenges making each video? And what has been the most challenging one to make?
It always starts with getting gassed up by an idea, falling in love with it and then remembering that we haven't got the £30k+ needed to shoot it. Jme likes to work with people he knows, so for a while it took me ages to convince him we needed a DoP on some shoots.

Nang was a real challenge. We decided to shoot with a drone during a mini-hurricane which made it almost impossible to fly through a window. As if that wasn't difficult enough already.

We wanted to get really ambitious with Pricks with fight scenes and chase sequences. But we did not have the money for a rehearsal, so it was a case of choreographing everything on set, which was fun but hard on our AD. The stair chase scene was something we almost didn't get. I really wanted it but had to convince J that it was worth the extra money. I thought we could do it a ‘cheap way’, but was sorely mistaken...

Nang was a challenge. We decided to shoot with a drone during a mini-hurricane...

The Live video was the most difficult because of how many shoot days we needed. We couldn't really afford to pay a crew so I just did it all myself, from being DoP to doing hair/wardrobe. Painful but well worth it.

Has the pandemic crisis had much of an impact on the making of the videos?
Luckily we shot everything before the **** hit the fan. We kind of wanted to get to ten videos but those plans got nipped in the bud real quick.

The video for Live is the most ambitious video yet in the series. What was the thinking behind the rolling news channel idea?
Jme and Merky had an idea of hijacking different news broadcasts ‘blooper’ style. As soon as I heard the track, I could just see Jme as a newscaster with the wig, glasses and everything. I’ve also always wanted to have J play different characters in a video, so this was the perfect opportunity.

I’ve also always wanted to have J play different characters in a video - Live was the perfect opportunity.

The tempo and cadence in the track was so dynamic, I felt it needed to have this manic energy so we tried to think of as many funny ‘news stories’ as possible. The fun part was writing all the fake headlines on the rolling ticker.

What are you most pleased with about the whole project? Which parts have worked best for you?
I'm really pleased that we shot so many different styles of video, from studio-based shoots to more guerilla-style filming. I think we really pushed ourselves creatively and tried things we've never done which was a great learning experience. I finally got to play with motion control which was as annoying as people were always warning me it would be.

Seeing This One come off was a really proud moment for us both.

What worked best for me? I’d say Pricks was approached more like a short film which I've always wanted to do, so I was very proud of what we achieved all in one day. ‘Live’ was a labour of love, trying to add as many layers to a video as possible while keeping it quite unconventional.

I was also really happy with This One as we tried a Memento-style video where the narrative was spliced up and re-ordered. Seeing that come off was a really proud moment for us both.

And what were the most fun and memorable moments making the videos?
That’s a tough one. The whole experience of shooting these videos has been nothing but fun; just two mates messing around with cameras and props really. I've never choreographed a fight scene before, so smashing sugar glass bottles on people was hilarious.

During the Live shoot we stepped out to get lunch with Jme in full costume - wig and all. Some of the looks we got on Camden High Road were priceless.

• Matt Walker is based for music videos and commercials at Kode Media and represented by Carrie Sutton. Watch Matt's showreel at Kode here.