"Everybody fights, nobody quits" - Barry Wasserman Bronx-born and larger-than-life, the original 'Film Warrior' has been the commanding presence on numerous ambitious and challenging music video productions - and therefore a pivotal figure in making the UK a world-class centre for music videos - and movies from Nic Roeg's The Witches to Olly Blackburn's Donkey Punch. For his immense contribution to the industry, Barry was presented with an Outstanding Achievement Award at UK Music Video Awards 2011 by his longtime colleague and friend WIZ on November 8th. A film was shown at the MVAs that pays tribute to the man himself - and here's a slightly longer cut than was shown at the MVAs, which includes messages from the likes of Nick Cave, Dizzie Rascal, Will Young, Kasabian, John Hillcoat, David Slade, John Hardwick, Ben and Joe Dempsey, and others. Several of Barry's friends were involved in the making of this film - with special credit going to the sterling work of editor Owen Oppenheimer. 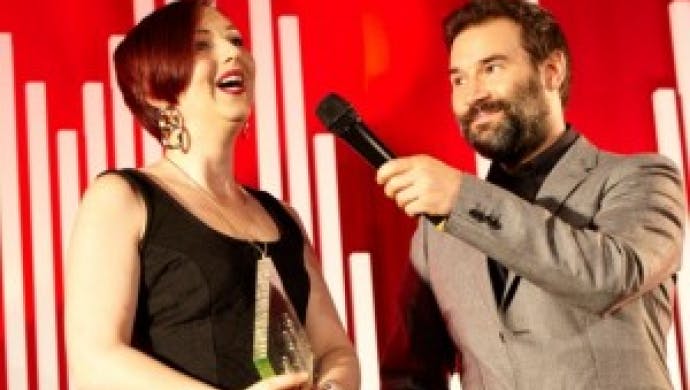 It's nearly here: the UK Music Video Awards 2011 - the 4th annual big awards bash for British music videos - takes place tomorrow night, Tuesday, November 8th - at The Empire, Leicester Square in central London. 34 awards will be presented at the UK MVAs 2011, to honour the best British and international music videos of the past year, and the creativity and technical excellence of the people who've made them. Preparations for the ceremony, to be presented by Adam Buxton and being held at the prestigious Empire cinema for the first time, are almost complete. A few tickets for the awards ceremony, plus an aftershow party over three floors at ONE London - two doors down from the Empire - are still available, together with aftershow-only tickets. Contact Suzie Curtis at suzie@ukmva.com or on 05602 046199. "The new scheme will provide a range of free services for its members including a mentor scheme, training and workshops, financial and legal services, discounts, master classes, seminars, screenings, interactive website, job services and competitions.

With less than a week before the UK Music Video Awards 2011 on November 8th, voting for the People's Choice Award sponsored by VEVO - the award at this year's UK MVAs chosen by the British public - has now closed. Over the past two weeks, thousands of British VEVO viewers have voted for their favourite UK music video of the year - and here's the shortlist of the six nominations for this special award. PEOPLE'S CHOICE AWARD sponsored by VEVO The winner of this and all the other awards at this year's UK MVAs will be announced at the ceremony, hosted by Adam Buxton, next Tuesday November 8th at The Empire, Leicester Square in London. A few tickets for the show and aftershow party are still available - contact Suzie Curtis at suzie@ukmva.com or on 05602 046199 for both awards tickets and for extra aftershow-only tickets, or visit the UKMVAs website.

BBC Motion Gallery - one of the largest and most respected footage collections in the world - has just been announced as the latest sponsor of an award at the UK Music Video Awards 2011, sponsoring the Best Live Music Coverage category at the UK MVAs 2011 ceremony on November 8th. BBC Motion Gallery showcases the best of BBC programming and news from the last 70 years, and represents many other unique content collections too, thereby offering creative professionals immediate access to the world's most comprehensive library of unique, high-quality motion imagery and unparalleled HD content for licensing worldwide. In the past few years, BBC Motion Gallery has been involved in several exciting music video productions specifically for live concert events. These include Madonna's Sticky and Sweet Tour, which featured BBC News footage and Bjork's current groundbreaking multimedia Biophilia Tour, which features blue chip BBC Natural History content. "These projects have shown how footage can be used in highly innovative, versatile and creative ways," says Linda Reeve, BBC Motion Gallery's head of sales & marketing, adding that the organisation is delighted to be involved in British music videos' most prestigious event of the year. "The UK Music Video Awards is the perfect opportunity for us to expand our relationships with the best creative talent within the industry." The award for Best Live Music Coverage will be presented, with all the other MVAs, at the UK Music Video Awards 2011 on Tuesday, November 8th at The Empire, Leicester Square - tickets are on sale now. More information and to download a ticket order form go to the UKMVA website.

Rudeye Dance Agency - The UK's no.1 professional dance agency - are sponsoring the Best Dance Video (UK) at the UK Music Awards 2011 on November 8th. Rudeye - based in Farringdon, Central London - is renowned for supplying choreographers and dancers for music videos, TV and commercials. This year's UK Music Video Awards takes place at a brand new venue - the Empire, Leicester Square in London - on Tuesday November 8th. For more information about the UK MVAs, and for tickets, go to ukmva.com.

Vanderquest - leading video duplication supplier to the broadcast and music industries - is the latest company to become a partner of the UK Music Video Awards 2011, sponsoring the Best Editing in a Video award at the UKMVAs on November 8th. Vanderquest's association with the music video industry goes back nearly thirty years - duplicating, distributing and even re-editing videos prior to broadcast. The company also provides the crucial Harding Test, and re-edits material to ensure that music videos pass the test that measures the level of flashing images - recognised as a potential trigger for seizures in epilepsy sufferers. "Over the course of our 30 years working in the music video industry, editing has changed as much, if not more, than any other part of the production process," says Vanderquest's Oliver Maingay. "With non-linear editing packages so simple to use and readily available, it's never been more important for an editor to stamp their mark with their own unique style, feel and techniques. We're proud to be supporting an award which rewards those individuals that dared to be different." The award for Best Editing in a Video will be presented, with all the other MVAs, at the UK Music Video Awards 2011 on Tuesday, November 8th at The Empire, Leicester Square - tickets are on sale now. More information and to download a ticket order form go to the UKMVA website.

As with all the awards the winners will be announced at the UK MVAs ceremony at The Empire, Leicester Square in London on Tuesday November 8th. Information and ticket booking forms from the website. THE INNOVATION AWARD BEST LIVE MUSIC COVERAGE BEST MUSIC AD - TV OR ONLINE

The UK Music Video Awards and The Hospital Club are partnering to offer a special 'thank you' gift to everyone who participated in judging at this year's UKMVAs: complimentary temporary membership to the UKMVAs judging panel in the lead up to the awards show on Tuesday, November 8th 2011. Over 300 people participated in the judging of this year's awards - which received more entries than ever before. Each UK-based MVA Jury Member will soon be sent an invitation via email from The Hospital Club, with details of how to activate their temporary membership, enabling them to use the club's facilities as often as they please, up until Friday 11th November. Sue Walter, MD of the Hospital Club says, "At The Hospital Club we celebrate and showcase talent, and as such we are delighted to be supporting the MVAs which recognize the extraordinary and diverse talents in the inspirational and endlessly creative world of music videos. We wish all entrants the very best of luck!" The UK Music Video Awards 2011 takes place on Tuesday, November 8th at The Empire, Leicester Square, and tickets are on sale now. More information and to download a ticket order form go to the UKMVA website.