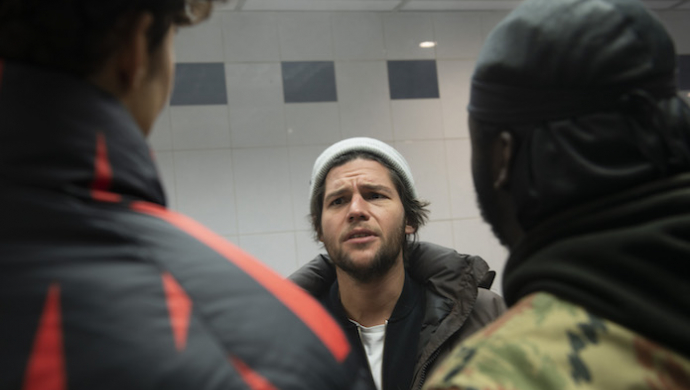 Thank God for Boasty. Henry Scholfield's video for Wiley, Stefflon Don and Sean Paul's track - featuring the one and only Idris Elba - arrived last month, and duly smashed through the doom and gloom of Brexit Britain.

It's a hugely entertaining, non-stop expression of the vibrancy of modern London, a celebration of street culture, and, perhaps above all, a statement about the musical powerhouse that is Grime. And with the absence of Wiley, the mainman himself, from his own video, it's a precocious 9 year old Londoner called Brooklyn who plays a massive role in its success.

So we spoke to four people crucial to the making of the video - director Henry Scholfield, executive producer Daniella Manca, editor James Rose, and commissioner John Hassay - to ask how they did it, particularly with the problem of Wiley's non-involvement, to make a probable contender for Video of the Year.

So starting at the beginning. How did it all get going?

JOHN HASSAY: I’ve tracked Henry’s career for 10 years. I knew he'd be great for this, so I sent the brief to Caviar for him. They said he was on holiday, so he was very unlikely to do a treatment. But then, the next day he sent a video pitch he made, from Sri Lanka. It was so good.

What made you go for this one, so quickly, Henry?

HENRY SCHOLFIELD: The track! I listened to it before knowing who was on it. I’ve always been a big Wiley fan anyway. The idea literally came into my head that first run. Then I realized who was on it, and was like, 'this is killer quartet of awesome artists'. So I shot a little video treatment/test an hour later - and that was it.

I wanted it to feel like a very much heightened version of ‘A Day In The Life Of’.

You learned the ropes directing grime videos back in the day for Professor Green (like personal favourite the Upper Clapton Dance). Was it a case of drawing on that experience, and/or wanting to get back to that world, and raising the bar on classic grime videos?

HS; Nicely put. Like you say, it was the scene that first inspired me into music video making in the first place - stealing my sister’s Handicam, going to venues to shoot battle raps, and try to interview artists.

Working with Spyro on his videos a couple of years ago was a real re-inspiration. To me grime’s about being inventive and maybe that’s why it’s a great medium for videos.

Daniella, Henry must be getting tracks all the time. Do you have a rule about what is worth sending on to him?

DANIELLA MANCA: Generally when that track lands in your inbox you’ll know pretty quickly if it's got legs. Ultimately it has to have something that can spark a killer idea. Doesn’t matter the genre, featuring artist, or potential hurdles.

He was first into casting, playing a Nintendo with a comb stuck in his Afro. We knew we had our prince.

How did you plan out the production?

JH: When Henry did his animatic - playing all the different parts - we knew a technical approach would work. He is a mega talent!

All the parts? When can we see it?

HS: It’s under lock and key, especially the Steff bit! It’s true, I do this a lot on mapping out timings and transitions in vids. Not always playing the parts myself, mind.

So the shoot with Sean and Steff came first?

JH: We shot Sean and Steff the day after another video for them both. It's fair to say Steff was slow out of the traps, but it was worth it! Peckham High Street was literally at a standstill for her performance. And Idris was a dream. Captain America levels of charisma. He rattled through his parts.

Peckham High Street was literally at a standstill for Steff's performance.

We find the different stars in different situations, as if it’s part of their normal lives, and we’re cutting into it. Were you able to give them ‘back stories’ for their roles?

HS: Totally. I wanted it to feel like a very much heightened version of ‘A Day In The Life Of’. A little back story goes a long way, and all of the artists were very much up for it. Like Sean P never asked ‘what’s up with me in the back of this van?’, and Idris loved the idea of his (wonderful!) missus Sabrina dropping in the ‘Jeeez’ when he gets a bit uber-Boasty.

Did you know places you wanted to shoot when you created the treatment?

HS: Yes and no. I knew to have Steff in a salon, then owning the South London streets. And Idris is a Hollywood reporter-style photo shoot. But we were gonna shoot a bit more all over the place – or rather the world. But then luckily we found a window to have all the artists in London. Then it was just a case of coming up with ideas of what worked best for the story, and upping the escalation of the clip.

Is there a key or trick into making regular London locations (ie the hairdressers, the pool hall, the chicken shop…) into more ‘music video’ versions of themselves?

HS: For sure. An excellent DOP  - the very talented Kanamé Onoyama - and skillful set dressing - thank you, Mr. Oian Arteta. Beyond that, just a bit of imagination to re-see what you’re used to with fresh eyes.

The transitions are hugely important. How difficult was it to get them right in the edit?

JAMES ROSE: Henry’s great at seeing both ends of the transition, which means there’s more room for me to have fun. There's always a bit of finicking, but when the timings are good from the off then you're free to noodle through options, rather than have to work really hard to make the 'one' work.

Now the obvious question: was the original plan to feature Wylie with his co-stars?

JH: Yep. Fair to say the big man was indisposed. I knew we’d have limited time with all artists, but didn’t realise how it would pan out.

HS: Unfortunately Wiley missed his flight, then wasn’t around for a bit…

JH: We tried to shoot a stand-in, but it didn’t work not enough charisma to stand up to talent.

HS: It kinda made sense to get in a big character in the shape of our little man. And Brooklyn (the boy) totally killed it!

It kinda made sense to get in a big character in the shape of our little man. And Brooklyn totally killed it!

JH: Henry just said: ‘It’s a Wiley video! This is what happens.’ Facebook reminded me that a decade earlier Wiley failed to show for ‘what do you call it’ a video I was producing for Adam Smith. So we cast Brooklyn.

He was first into casting, playing a Nintendo with a comb stuck in his Afro. We knew we had our prince. He's a very cool kid - a wee man in a 9 year old’s body. Then we shot two weeks later. We had to fit round a big commercial Henry was doing on the DL.

How did the shooting plan change?

DM: Despite shooting an extra day, the plan stayed pretty close to the original. We had to keep it as a well-oiled machine to maximize all of Henry’s transitions and set ups.

What stands out as the biggest challenges?

DM: The beauty of promoland is in part the constantly changing goal posts. I can maybe count on one hand the promos that have been consistently smooth, but actually I prefer the challenging ones. It means when you finally deliver it, there’s an even bigger sense of achievement! On this one, probably getting all of the footage with Brooklyn was a challenge. But he smashed it in rehearsals with Henry so on the day we rolled on through.

So when did you shoot the intro convo between Brooklyn and W. Was that always planned?

JH: The intro was bootlegged on the day. We felt we had to both own and explain Wiley absence. The video game fits the narrative, and Boss Baby Brooklyn completely nails the tone.

When did you get Wylie’s audio contribution? That is Wylie, right?

JH: That’s Henry sampling other interviews with Wiley. He is quite the fan. I don’t think I’ve ever had a director so across the artist and music before.

And likewise with the other cast members – there’s always something going on in the background, so its interesting to watch again and again. What was their brief?

HS: Things like: ‘You gotta be super-serious on these mini-motors’, ‘Mr. Elba, would you mind handwriting some lyrics to put in the beak of this falcon?’ ‘You bro, when you see Steff you’re gonna be falling off your bike’… etc. That kind of thing pretty much.

Even if no-one else notices, I really get a kick out of details in the background. Big Up to Ruben Dangoor for letting us feature his excellent Wiley work.

Did you have much leeway in the edit to get the best bits of different takes without affecting the flow of the whole video?

JR: When you’re dealing with long takes, the flow of the video doesn’t come from the cuts, but from the transitions from one take to another, so choosing the best takes is doubly important.

Did Wiley shock everyone by turning up for the edit?

JR: No, didn't meet Wiley. I have met Wretch 32 before though.

• A Promonews and Caviar production. Behind The Video is a series of sponsored content on Promonews. For more information, email info@promonews.tv

Yes, this really is a music video for rock legends Deep Purple. They're back with a just-released …