Behind The Video: Allie Avital on Moses Sumney's 'Me In 20 Years' 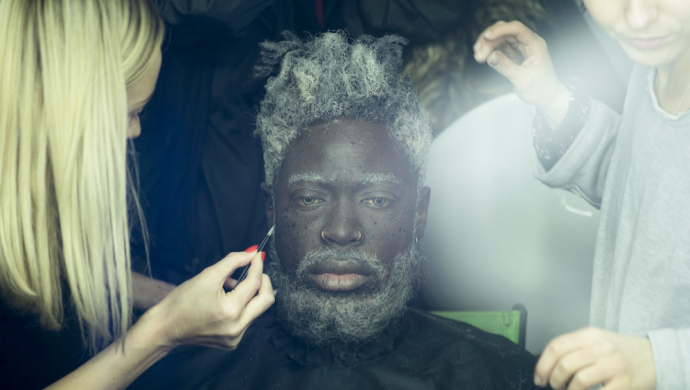 Inspired by the lyrics, Avital has created a quasi-literal interpretation of the song, Me In 20 Years, with Sumney as the very old protagonist suffering in a grim mid-20th century setting, flecked with magic realism.

We talked to Allie Avital about the making of the video - filmed at the end of last year - and discovered that in shooting the video in a Soviet-era tower block in Kiev, she tapped into her own family's Eastern European roots. She even had the chance to direct in Russian...

For previous videos that you’ve made with Moses -  you have sometimes come up with the original ideas for the video and other times built upon Moses’s initial ideas. What happened in the first stages with this one?

Initially, I heard the song and texted Moses that I absolutely HAD to make the video for it. On a call, he told me the lyrics and what the song was about, and within a few minutes I said “wait, what if we make you old and then have a pulsing crater next to you in your bed and then eventually you get sucked into it?!”

It’s funny because it’s such a literal illustration of the lyrics. But it’s a good reminder that sometimes you don’t need to over-complicate or intellectualize these things; the feeling and the imagery was already there in his words. Once I saw the story in my head, it made me want to cry whenever I imagined it, and so I knew we needed to make it.  Luckily he was into it, so we developed it together from there.

Once I saw the story in my head, it made me want to cry whenever I imagined it.

Was it a conscious decision to repeat that dreamlike and haunting atmosphere that you have achieved with the previous videos?

Not really. I do think there are parallels, but they emerged unconsciously.  When we work together we never really talk about atmosphere or tone referentially, it just evolves from the ideas themselves.  There was a lot of intention in the symbolism of the crater, as well as all the details such as rotten avocados and lemons in the fridge, the spilt milk, the nostalgic shirt. I suspect the dreamlike feeling comes from those elements being meaningful and carefully thought through.

Above: Allie Avital on set on the Me In 20 Years shoot (pic: Nastya Roshuk)

How did you go about transforming Moses into such a convincing version of himself as an elderly man? And how much older is he than actual Moses?

All credit goes to Marta Skalska, who did hair and makeup at the shoot in Kiev. She’s an absolute genius. And then Moses spent all day 'in character' as an old man which helped too. Part of the joke is that obviously Moses wouldn't be this old 'in 20 years', but I suppose it’s accurate in terms of young people’s projection of themselves when they age.

Fun fact about the aging: his fake moles were inspired by those of Morgan Freeman.

The crater on the bed, is one aspect of the atmosphere of the video managing to be both literal and magical. What does it represent?

It’s about absence and negative space. One could interpret it as an absence of someone who was once there, or absence of an 'other' to begin with. It’s also the ever-present pulsing pit of your own mortality waiting to engulf you... uplifting stuff like that.

Did you spend much time thinking about the world in which the elderly Moses lives? How would you describe it?

Originally we thought of it as a castle, like a modern hunchback of Notre Dame, or kind of a reverse Rapunzel. But then when we started looking at locations in Kiev, we fell in love with the idea of setting it in a Soviet apartment block.  We liked that often loneliness exists within close proximity to so many other people, and I love when “magic” is grounded in such a relatable reality.

The crater? It's the ever-present pulsing pit of your own mortality waiting to engulf you... uplifting stuff like that.

It was especially personal to me because so much of my family lived and died in these Soviet buildings in Russia, cramped with many other families to a single unit, so that added another meta-layer to the whole thing.

We knew we wanted a lot of ornate texture in the walls, but then to light it very dark and to age everything.  We worked with the brilliant production designer Sergey Vinnichuk to design every inch of the space, with a lot of thought as to who this character was. There are details such as old books and kitchen appliances that aren’t even seen on camera but added to the cohesive quality of the environment.

Above: Moses in the monitor on the Me In 20 Years shoot in Kiev (pic: Nastya Roshuk)

When did you shoot the video? What were the challenges on the shoot day?

We shot in Kiev in December of 2019 with Radioaktive, and it's one of my favourite shoots of all time! I got to direct in Russian for part of it, which is my native language but I’d never been to Russia or Ukraine before so that was quite special.

The shoot went relatively smoothly, but getting those opening and closing shots through the windows was an ordeal. It’s three shots stitched together: a drone shot of the building we used for exteriors, a shot of our interior from the outside, and then a shot of our interior from the inside. They all needed to be matched up and from matching angles, so it was a very technical effort. There was also the spilling of the milk over and over, and the physical hole in the bed that Moses falls into. It was a long full day.

I got to direct in Russian for part of it, which is my native language [even though] I’d never been to Russia or Ukraine before.

The cinematography of the video plays a huge part in the atmosphere. Was that all there in the footage shot by DoP Logan Triplett, or something that you pushed further during the post process and grading?

Logan and I were really diligent about creating a look that served the story and kept pushing for something that felt really unique and un-trendy.

Our process with Logan is always very instinctual; we’ll look at some images but then try and forget them so we don’t reference anything too closely. We decided to shoot digitally and then run the finished video through a 16mm scan to blend the sleekness of the crater VFX with the footage and give it some texture.

The post process was nuts - we had Erik Ferguson the animator building the crater on our digital footage - some of it was fully CGI - then B.Art VFX doing cleanup and compositing the crater, then stitching together the opening/closing shots with the crater in them. Then it was pre-graded, then that was run through a 16mm scan, and then sent back for additional grading on top of the scan.  But everything was quite intentional every step of the way.

What adjustments to the story, did you make during the post production process, if any?

None! If I look back at the treatment and the animatic for this video, they’re almost identical to where this ended up.

There’s often an eye roll when a musician wants to direct... but I can attest that Moses really does have the talent and instincts for it.

Your videos were for Moses’ earliest releases. This one is your first from his second album. How has he changed as an artist, in terms of what he wants to achieve and/or his capabilities?

It’s exciting to see Moses’ artistry evolve not just as a musician but as a filmmaker. When we first worked together he was new to film but was very intrigued by the process, always wanting to learn.  I know in our world there’s often a bit of an eye roll when a musician wants to direct their own videos, but I can attest to the fact that he really does have the talent and instincts for it!

Him and I are cooking up some bigger plans together as well, and I’m always inspired by his multi-hyphenate ways. It was refreshing to direct a video for someone who understands filmmaking a bit more; it made for a more grounded process.

• Allie Avital is with Smuggler, and represented for music videos in the UK by Claire Stubbs at Mouthpiece.

Luke Logan-Malik directs an upbeat promo, battling the elements all the while, for London …