KC Locke taps into the mystique of masked rapper M Huncho, referencing fantasy stories and cinema in an imaginative fashion, in the latest edition of Apple Music Agenda Live series.On Doomsday, Huncho explicitly references the late MF Doom, from whom he has inherited his masked persona, and who was himself inspired by Marvel super-villain Doctor Doom. So Locke provides Huncho with his own superhero origin story in a movie-like setting - a huge cave, set in a mountain peak. His very own Fortress of Solitude, in order to reflect on his life."I was very excited to work on this project, especially as it was my second Agenda Live visual," he says. "I felt like I had to approach it completely differently than I did the first time, while also staying true to the DNA of the Agenda series."I wanted to push the boundaries and make something very different that co-existed between the Apple Agenda series and M Huncho’s Chasing Euphoria album in my own KC Locke way!I wanted to reveal who is the mind behind the mask..."For this video I really wanted to tap into Huncho’s identity, something he’s always been very elusive [about]. I wanted to reveal who is the mind behind the mask in a way which is respectful to his legacy, but gives the audience an introspective vision they haven’t seen before."It opens on Huncho’s wise words and life lessons as a spoken-word piece, before transitioning in a dreamlike manner [to reveal] an experimental performance inside a huge underground cave network - where we find Huncho searching for his euphoria!"I drew references from fantasy worlds while conceptualizing this visual to really build on the mystique of the M Huncho universe and origin story. I like to place the artists I work with into their own universes as if they were characters in their own origin films." 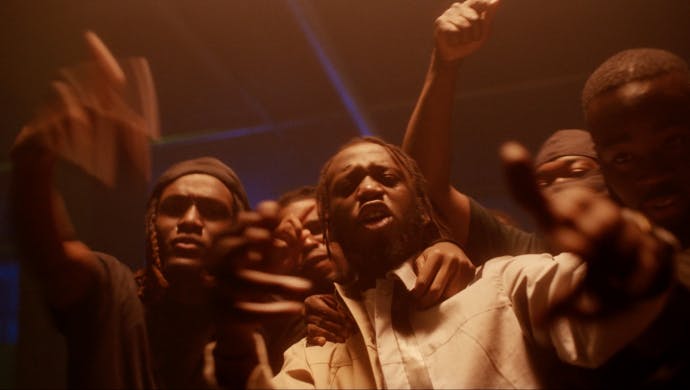 Femi Ladi directs a hypnotic promo for Backroad Gee, featuring a blistering performance of his track Fear Nuttin. The latest in Apple Music's video series The Agenda Live - which shines a spotlight on Black British music’s most prodigious talents - the video is a high-energy showcase of the up and coming talent, shot in a dynamic, frantic style. The high-contrast cinematography creates an enigmatic atmosphere, leaning into the thrilling soundscapes and abstract nature of the piece.

Charlie Sarsfield directs the third instalment of Apple Music's The Agenda Live, for "Queen of The South" Shaybo. In suitably grand surroundings, Shaybo blazes through a series of performance vignettes, captured through hypnotic motion control setups. Exuding opulence and luxury, the artist notes that no matter how rich she gets, she'll always take care of her community - and it's safe to say her stars are ascending at a meteoric rate. DoP Pieter Snyman's polished cinematography elevates the lavish vibes, whilst the coloured lighting and confident control of the camera ensures the project remains fresh and contemporary.

KC Locke directs an energetic performance video for Pa Salieu, in the first instalment of Apple Music's The Agenda Live.Pondering upon the question of personal agenda and life goals, Salieu narrates his answer as the visuals dive into a frenetic haze of back-projection and lo-fi textures, giving a dynamic energy to the intro. A live performance follows, shot all in one take, as Salieu traverses the industrial landscape, weaving in and out of bold coloured lights.