Hot Chip 'Dancing In The Dark' by Kieran Evans 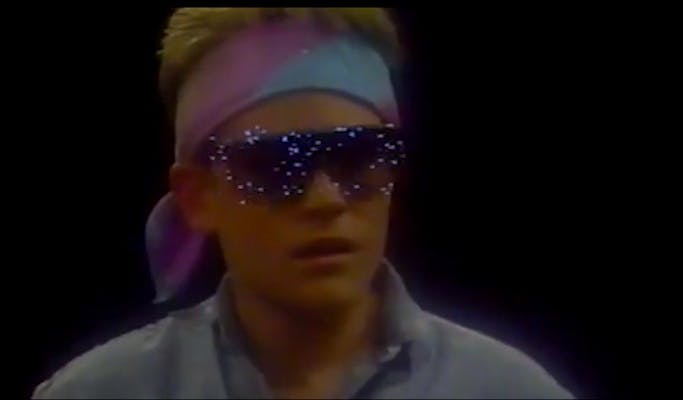 Kieran Evans has pieced together this 80's throwback for Hot Chip's cover of the Bruce Springsteen classic Dancing In The Dark. As Evans explains in detail below, the video was inspired by the randomness that was New York City's cable television programming during the 1980s.

"Given the track is a cover of a Springsteen 80’s classic and LCD Soundsystem’s All My Friends and the Super 8 live footage was shot in New York, I thought it could be fun to draw on the influence of Free Public Access / Cable TV that was prevalent in NYC during the 80s and early 90s. Even Warhol had a show on it at one point.

"There was a huge range of weird and wonderful shows including Poetry Corner, TaxieDermy live, The Cable Doctor, UFO evangelists but also things like tacky gay clubbing reports, nightclub visits, local celeb interviews. A huge, surreal slice of NYC life basically. Anyway my idea was that the promo essentially is a sofa surfers journey flipping through a night of cheap New York cable tv channels, capturing a sense of the bizarre and the mundane.

"As the viewer flips between channels, Hot Chip’s ‘channel' becomes more and more prominent as the track builds and builds. Visual treatment wise, it was very much keeping a lo-fi aesthetic that went with the territory of cheaply produced TV. Rolling lines, dodgy graphics and type treatments, simple visual loops such as news report graphics, TV interference all very reminiscent of the early years of cable TV."