Jack McGinity on his favourite music videos - by Oscar-winners! 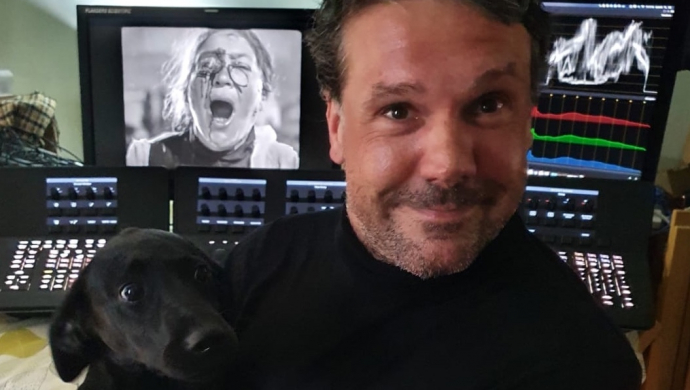 While he has been quarantining, CHEAT colourist Jack McGinity (above, with his dog Evie) has kept himself very busy. For a start, the grading work is still coming in. But when he gets the chance, Jack also likes to indulge his interest in a fascinating corner of music video history: pop promos that were directed by Oscar-winners.

Jack has now shared the first part of his detailed research on the subject with us, revealing some gems - some well-known, others wonderfully obscure - from the late 80s and early 90s.

And as you can see, that James Cameron would have made a very handy music video director...

The end revelation is not exactly Earth-shattering, but this is a fun, glitzy, very 80’s music video with more masks than a comic convention. I am also a fan of any video that opens and closes with close ups of weird-looking dolls.

JM: James Cameron won his three Oscars in 1998 for Titanic. Ten years previously he directed this music video for the band Martini Reach. Not a well-known band by any means, but the reason Cameron got involved was down to the fact that actor Bill Paxton was a member of the band. Paxton plays the lead in this Wild-West-with-with-motorcycles-instead-of-horses video which has a strong air of Mad Max too. The film is littered with Cameron favourites with cameos from Lance Henriksen, Paul Reiser and Jenette Goldstein, among others.

My favourite thing about it is that the head bounty hunter is played by his soon to be wife (and fellow Oscar-winning director) Kathryn Bigelow. We also get a close up of Bigelow spitting chewing tobacco onto a scorpion. If this video was realised into an actual film, I would very much watch it.

JM: That nicely segues us into Kathryn’s contribution for this list. Bigelow’s two Oscars are for The Hurt Locker in 2010, but 23 years earlier she was having a ball with this video for New Order. A parody of the glam metal videos that were prevalent at the time, we get to see Bernard Summers and the gang prancing around the stage in huge wigs, leather and snazzy cod pieces.

Like Martini Ranch this has a cameo from the late, great Bill Paxton, this time running down roads and smashing through a windscreen for a kiss. He must have really liked the poor girl.

JM: Jonathan Demme is probably the most obvious choice on this list having directed lots of music videos as well as concert films for Talking Heads, New Order and Neil Young. Demme won his Oscar in 1992 for Silence Of The Lambs. He was also very active in political activism throughout his life, making films for civil rights charities and getting involved in projects like the video above for KRS-One’s Human Education Against Lies, aimed at stemming the violence that was endemic in America’s urban black communities.

Demme sadly died in 2017, leaving behind a wonderful catalogue of film and video, and evidence of a life well lived. The features Vox Lux, Suspiria and Phantom Thread are all dedicated to his memory.

JM: Martin Scorsese has been nominated for 14 Oscars in total, only winning one - for The Departed in 2007 (go figure). The full film of Bad is a beefy 18 minutes long and starts as a gritty social commentary on inner city deprivation in Brooklyn. Shot by Michael Chapman who was previously the cinematographer on Taxi Driver and Raging Bull, Scorsese’s love of Italian Realism is evident in the look and feel of the black and white story.

This abruptly changes as we enter the colourful music video part of the film that we all will remember. Michael dances with the least intimidating gang since The Famous Five, and by repeatedly grabbing his genitals he finally earns Wesley Snipes respect. Scorsese would return to these themes in 2003’s Gangs Of New York, with Daniel Day-Lewis famously using Jackson's performance as his inspiration. Obviously I lie.

Shania Twain - Dance With The One That Bought You (1993)
Director: Sean Penn

JM: Sean Penn has won the Best Actor Oscar twice, for Mystic River in 2004, and for Milk in 2009. When Sean isn’t being a celebrated actor he likes to pursue other activities such as having a difficult marriage to Madonna, and having a name that sounds like the capital of Cambodia (joke stolen from Chandler Bing). He’s also turned his hand to directing several times, including this video for Shania Twain.

The video shows us a couple 40 years apart going to a barn dance in both ages. The husband seems content to dance around flirting and chatting leaving his partner to sit alone in the corner. The video ends with him finally dancing with his girl almost as an afterthought. What we can learn from this is that some men never change, especially men with vastly oversize cowboy hats.