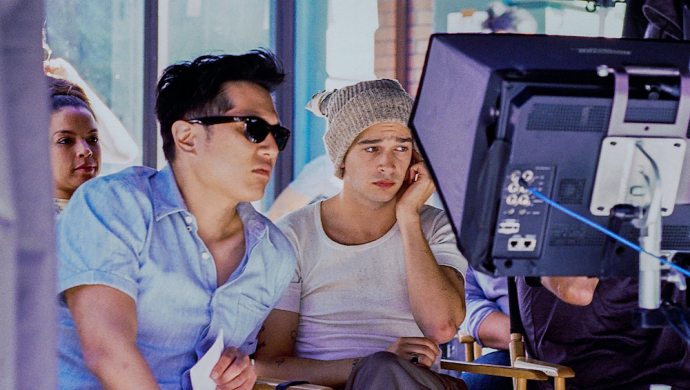 Warren Fu has been one of the most profilic and successful directors working in music videos for more than a decade. He has been the go-to visual collaborator with a range of artists - Daft Punk, Mark Ronson, The Killers (and Brandon Flowers as a solo artist), The Strokes (and Julian Casablancas as a solo artist), Haim, Snoop Dogg, Pharrell Williams - and most recently, The 1975 (here he is, above left, with the band's frontman Matty Healy on the set of the Sincerity Is Scary video last year).

Warren was born Chicago, raised in California, studied economics at UC Berkeley, and he got his break in film working at Lucasfilm. He now lives in Los Angeles - and it turns out that this very busy director enjoys cooking, and a good pun-related purchase...

How long have you held your current position? What were you doing before this?
I’ve been directing for 10 years now, and before this I had another life as an art director for feature films.

What was your first job, or first significant break in the industry?
The first step was getting my foot in the door at Lucasfilm through their internship program, which ended up being like film school for me.

There I learned about storytelling, art direction, design, model building, shooting miniature sets, the importance of good hygiene… so many things that have come in handy in the filmmaker’s toolkit.

Name one music video that inspired you to get involved in making music videos?
The Director’s Label DVD set was a game changer for so many of us. Especially Pharcyde’s Drop by Spike [Jonze], Portishead’s Only You by [Chris] Cunningham, and The White Stripe’s Hardest Button To Button by [Michel] Gondry.

Name one project you’ve done that was significant as a learning experience – and why?
The Strokes' Threat of Joy. We were suppose to do a video for a song called OBLIVIUS, and for a number of reasons the track changed two days before the shoot. It was too late to cancel the stage, talent, wardrobe and crew, so I basically had to write a new concept with the elements we already had in place.

You just have to learn to roll with the unexpected in filmmaking, even if it means winging some of it on the day

I’m the type of person that prefers to plan ahead, but I learned that you just have to learn to roll with the unexpected in filmmaking, even if it means winging some of it on the day. So I made the new video a sort of classic caper about the footage from the original video being stolen and the search that ensued.

What are the favourite projects (music videos or otherwise) you’ve worked on in the past year or so?
I'm pleased with how aggressive The 1975’s People video turned out. It was a complete departure from the videos we had done together in the past.  We went from a happy people place with Sincerity is Scary, to a scary place with People.

We went from a 'happy people' place with Sincerity Is Scary, to a scary place with People.

Gesaffelstein’s Blast Off was a nice reunion project because I got to reunite with the Daft Arts creative team, who helped come up with the initial concepts and ideas for the video in the early stages. And, it’s always a pleasure to collaborate with Pharrell and his crew. It can be a bit of a challenge to satisfy everyone when there are multiple voices involved, but I think in the end we were able to arrive at something that balanced that feeling of darkness and enlightenment that I got from the track.

I’m also happy with how slick Good Thing turned out. It was my second time collaborating with Zedd. (The first time was with Katy Perry and this time it was with Kehlani) I’ve always wanted to do a video with lots of choreography and we got to collaborate with Sean Bankhead on this one. I loved what he did with Normani and after seeing Motivation I knew we had to get him on board for our video.

I think that’s one of my favourite things about music videos. The fact that you can see the work of other artists you admire, be it dancers, choreographers, art directors, graphic designers, stylists, you name it… and then two weeks later you find yourself on set working with them, if you can get your schedules to align.

In music videos you can see the work of artists you admire... and two weeks later you find yourself on set working with them

What are you currently working on?
I’ve just wrapped up a music-related cinematic story with multiple chapters. It will be coming out in the first quarter of 2020.
Then I’ll be in the UK for the first part of the year to shoot a few commercial promos.

What kind of work would you like to be doing in the future?
I’ll always love music and setting visuals to them. I would also love to keep pushing into more narrative work, hopefully in TV and film. When I retire from all of that I want to make wood furniture. Or music. Or both.

What advice would you give someone entering your field?
Keep your mind open because you can never stop learning.

Tell us something that we don’t know about you…
My favourite show ever is The Office (UK); my strength is directing, my weakness is eczema.

When you’re not working, what do you like to spend time doing?
Cooking. As someone who grew up painting, I’m finding a lot of similarities in the way you envision the final outcome and make tiny adjustments along the way.

Advice? Keep your mind open because you can never stop learning.

Where did you go on your last holiday (or vacation)? And where would you love to visit?
Kyoto, Japan.  I would love to go Iceland or Peru next year.​

Your favourite music videos (by other people) in the past year?
It was a bit over a year ago, but I liked Rian Johnson’s LCD Soundsystem video for Oh Baby.

What are your favourite currently-running TV shows?
I love Barry, although I’m way behind on it. The dark humour is right up my alley.

I also love the simplicity and pacing of The Mandalorian so far. It’s nice to see a lot of people I used to work with involved on that show, like Doug Chiang and Christian Alzmann.

What’s the best movie (or movies) you’ve seen recently?
The Irishman was superbly made, especially the last act. I was captivated for all three hours+ of that film.

And Parasite. Instead of best I would say it was the most impactful movie I’ve seen recently. I kind of loved it and hated it.

Favourite music artist(s), and favourite gig(s) in the past year?
I loved the Lux Prima album that Karen O and Danger Mouse put out this year. The shared listening experience they created with the rock was really ambitious, and turned out to be really special. I respect the fact that they set out to make something different.

Best book you’ve read, and/or best exhibition you’ve seen recently?
I got to experience Alejandro Iñarritu Carne y Arena at the LACMA and I found it to be really moving. I’m not really into VR but that was a great use of it to facilitate empathy and understanding of the struggles of migrants.

Favourite food and/or favourite restaurant(s)?
I’m kind of over ramen and back on my pho game. My vote for best broth in LA is Pho 87 in Chinatown.

Work/life balance? Anyone who works in music videos knows how it can be… but I’m trying!

What’s your favourite political or charitable cause, and why?
For the past few years, when I’m able to, I’ve been involved with The Superhero Project. It’s a program in which artists create superhero characters for youth with serious illnesses or disabilities.

I got involved with it after I did an animated video for The Killers' Miss Atomic Bomb, and the animation producer connected me with the founder of the program, Lisa Kollins. It’s been pretty heartwarming to get the reactions from the kids and their families after they receive their piece of art.

Best recent purchase?
The DōJOE pizza oven (above), because I like Neopolitan pizza and I like bad puns. You see, pizza is made from dough, a dojo is like a place to do martial arts or something like that, and my ceramic egg grill is called a Kamado Joe, so this attachment it is called a “DōJOE”. A pun is a play on words, or wordplay, if you will (...and you will). It’s one of the best “egg”cessories you can get.

WIZ reunites with longtime collaborator Will Young for the first part of a short film, heralding …

A mesmerising promo by Rei Nadal at Prettybird for Georgia Twinn's track Moth.

In the final instalment of Martin J Pickering’s video trilogy for Morcheeba’s new album, the …

William Glass captures a hypnotic collage of rolling clouds, in his promo for Still Life's …