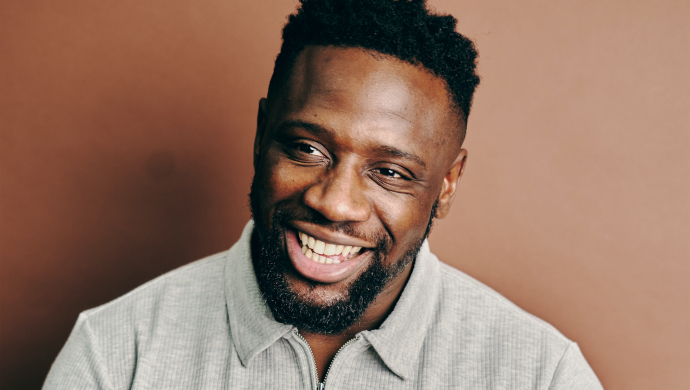 As founder and MD of LEVILE, a leading casting agency for diverse talent and audiences, Ola Christian has been casting director on dozens of UK-produced music videos in the past few years, for artists including Burna Boy, Krept & Konan and Ghetts.

The 6' 5" tall, 30 year old Nigerian was born and raised in North London, and studied business and marketing at the University of Hertfordshire. Then he became an actor - appearing in feature film Tarzan The Untamed, ITV series All About The Mckenzies, and the anti-bullying PSA Will You Kill Me Now - before moving to the other side of the screen, as a casting director and producer.

Ola lives in Enfield, where he grew up - and he's a long-suffering supporter of Arsenal FC...

How long have you held your current position? What were you doing before this?
I have been casting for roughly three years now. I would define myself as a casting director and producer. Casting is my primary focus right now and I enjoy working with and breaking fresh talent. I have also been producing projects for around five years. Before casting and producing, I was interning at an agency called Latimer Group where I met a lot of great people.

LEVILE is a really important platform to me as it acts as a hub for creatives to gain genuine access and opportunities in the TV and film space. The ability to breakthrough talent, facilitate new opportunities and inform organisations about steps they can take to improve representation is why LEVILE exists.

What was your first job, or first significant break in the music video industry?
My first project in the music promo space was Krept and Konan's - Ban Drill which was directed by Rapman. It was a great but very challenging project to work on as the turnaround time was super tight for the amount of talent we had to provide for the shoot days.

The project had a deep message about the state of the drill scene in the UK and allowed me to establish good relationships with key people who I still work with today.

[Ban Drill] allowed me to establish good relationships with key people who I still work with today.

Name one music video that inspired you that get involved in making music videos?
Too many! I would say growing up, I was naturally mesmerized by songs that my dad would play in the house or videos I would see on MTV Base and The Box. Back then, when you saw a music video it meant so much more because you would be waiting all day just to see your favorite one. So I made sure I enjoyed every second of the song and music video.  Missy Elliot - Rain, Donell Jones ft Left Eye - U Know Whats Up, Michael Jackson - Remember The Time, Aaliyah - One In A Million.

I’d say my favourite at the time was Usher - My Way and You Make Me Wanna because he was cool, could dance and sing. He was just that guy.

Name one project you’ve done that was significant as a learning experience – and why?
As an actor I was involved in a project at Warner Bros studio for a major feature film in 2013/2014. Just going through the whole process of auditioning, booking the job, seeing how a big multi-million pound production runs, the preparation and more, taught me so many valuable lessons and skills through observation.

I learnt the 5 P’s - Proper Preparation Prevents Poor Performance. I connected really well with the casting director and she gave me great insight into the role. This was before I entered my current role.

Having a positive support system in what can be a very demanding and challenging industry really does help.

What are your favourite music video-related jobs of the past year or so, and why?
Burna Boy - Way Too Big produced by the lovely Linah Bensadok, directed by Meji Alabi who is one of the best directors in the game right now. It's an exciting, pacy music video that took up multiple scenes with great transitions.

There were subtle references to icons like Mo Ali, with the conference scene where Burna Boy is surrounded by his friends and family, and the boxing scene emphasizing how Burna Boy is larger than life. Meji does a great job of paying tribute to iconic moments. This video is close to home with my Nigerian background and being a big guy, I understand what it means to be way too big!

I would also say Digdat ft Aitch's Ei8ht Mile, produced by Kareem Adeshina at Greatcoat films, directed by Wowa - which was nominated for a Rated award. It was just a fun process. We had a big job to do with the cast, and Digdat and Aitch were super-hot at the time too.

Ghetts X Stormzy's Skengman by Nathan James Tettey - being on set and witnessing the chemistry and energy between the two artists was an experience in itself.

What are you currently working on?
I am currently working on quite a few projects. A few short films with some talented filmmakers from the UK and US, music promos and a TV series. So my pipeline looks exciting and I'm looking forward to diving into the projects for the second half of 2021.

What kind of work would you like to be doing in future?
I would like to dive deeper into the commercial, TV and feature film space. However, all good things come on God's timing. The passion and hunger is there to explore that realm of long form content.

I have a burning ambition to be the best at what I do and I'm not afraid to say it. I want to be at the top of my chosen profession and be a person of influence for my community.

What advice would you give someone entering your field?
I would say to focus on building relationships with people around you. Network sideways. Having a positive support system in what can be a very demanding and challenging industry really does help.

Stick to your core values. It's important to not ‘fit in’, if something doesn’t feel right. There is power in saying no. As well as the obvious fundamentals which is to work hard, be kind and stay humble. Be willing to learn, observe and take criticism. We all make mistakes, turn the losses into lessons.

Lastly, my favourite saying is that ‘There are opportunities within opportunities’ which implies you should maximise any chance you have to prove yourself because you never know who is watching.

Studying at boarding school in Nigeria.... was a real eye-opener to a lot of things.

Tell us something that we don’t know about you…
I studied at an international boarding school in Nigeria for a year because my mother believed it would provide me and my sister a better education. I would say they are more advanced in Nigeria and definitely without a shadow of a doubt, stricter too! But I absolutely loved it. It was a real eye-opener to a lot of things. It made me love my country and people more.

And I was naturally left-handed as a youngster, but it didn’t match my cultural values according to my dad so he made me write with my right hand until it became natural. We laugh about it now, ha.

When you’re not working, what do you like to spend time doing?
Playing, watching or moaning about football. I am a big Arsenal fan, so much so that it hurts because we haven't been too successful lately!

I love reading and listening to inspirational podcasts especially while working out. It’s a great way to take in information whilst on the move. A few podcasts I would like to mention are Diary of a CEO by Steve Bartlett, High Performance Podcast by Jake Humphrey, Black Millenial Money by Joseph Nwosu and Halfcast podcast by Chuckie Online. I also love to watch films in my spare time and research emerging filmmakers and creatives.

I love reading and listening to inspirational podcasts especially while working out.

Where did you go on your last holiday (or vacation)? And where would you love to visit?
Dubai is my go to spot! The country is welcoming to tourists and offers a level of hospitality that is rarely matched. Good weather and good food is always a bonus, right?

I would like to visit Singapore. I’ve seen and heard a lot of positive things about the country and Asia is one of the continents on my bucket list when the climate improves.

My favourite film of the last year or so was Queen & Slim [directed by Melina Matsoukas]. The story, acting and cinematography was just incredible on every level. You can easily get lost in the beautiful chemistry depicted by Jodie Turner-Smith and Daniel Kaluuya. So many takeaways from the film. Just incredible.

What's your favourite TV show at the moment?
It has to be Snowfall, starring Damson Idris!

What are your favourite music videos by other people in the past year?
Kano - Teardrops - The man has an on-screen vulnerability that can’t be matched. Great musician and an incredible actor.

Favourite music artist(s) in the past year?
My favourite artist is Burna Boy. When I got the call to work on his music video, which was the last project my team at LEVILE worked on in 2020 it felt like fate, so it was a pleasure being able to work on his promo Way Too Big with a great crew and cast. He recently won a Grammy for his album Twice As Tall which he fully deserved.

And Ghetts is such a great performer, him and Stormzy being on the same track on Skengman is something special. Also - honourable shout to Etta Bond, Skepta, Chip, Giggs and Dave.

Best book you’ve read recently?
I read a lot of books on self development, mindset and entrepreneurship. My recent favourite is Relentless by Tim S Grover. An honourable shout out also to Poor by the incredibly creative Caleb Femi (below), I Am My Brand by Kubi Springer, and Traction by Gino Wickman.

Favourite food and/or favourite restaurant(s)?
Nigerian cuisine is number 1. It has everything from flavour, spices and QUANTITY! Ha. Restaurants have to be Banana African restaurant in Tottenham, and Vapiano’s. I’m not a massive fan of pasta but a scampi e spinaci with tagliatelle is glorious.

What’s your favourite political or charitable cause, and why?
I really like an organisation called Kwanda who I donate to monthly. They are a modern collection pot for black communities. You pay a monthly subscription £1, £5 or whatever you are happy to contribute. The most important part is that they hold themselves accountable by displaying their expenditure monthly to their so-called ‘Villagers’ of contributors. Great platform.

Best recent purchase?
My portable charger, the most underrated invention of all time.

Work & Life - balance/ imbalance out of five (1 for imbalance; 5 for balance)?
Put it this way. I work everyday but I always make time for family and friends. So I’ll let you pick a number!

Behind The Video: Josh Thornton-Allan on Emily Burns's I'm So Happy