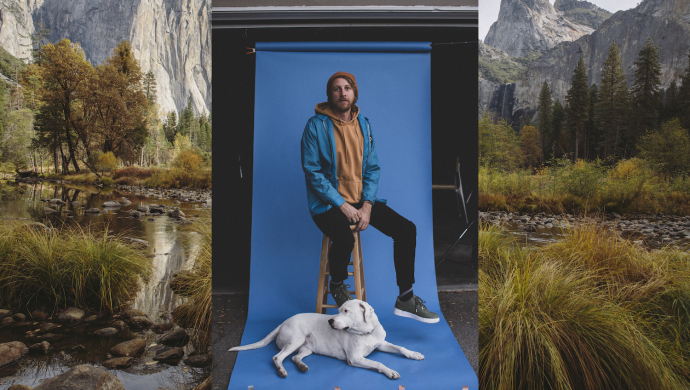 Isaac Rentz has been putting the fun back into music videos for more than a decade. He has directed lots of them - for blink 182, Cage The Elephant, Katy Perry, OneRepublic, Olly Murs, and many more - with a sense of humour ranging from the tongue in cheek to the goofily absurd. And he's been busier than ever in music videos recently, with UK-commissioned videos for Mabel and Freya Ridings, and his latest is a blockbuster lockdown production for Jonas Blue and MAX.

Isaac, 37, was born in Hokkaido, Japan - where his father was teaching English at the time - but then grew up in the sweltering heat of Arizona. He went on to study American History at Northern Arizona University, where he made his first bold steps into making music videos. He never did get to use his university degree, but as he says, "I can tell you all about the spread of syphilis during the Lewis and Clark Expedition." Nice.

He now lives in Los Angeles, in a bungalow-style house with his wife Kate, a photographer and director, and his dog Maggie (above, with Isaac). We sent over the Work + Life Questionnaire to find out how life was treating him and the family at this extraordinary time, discovering that he's been catching up on classic movies during isolation, and some serious reading. He's also discovered this great sitcom on Netflix...

How long have you held your current position? What were you doing before this?
I was a college student, designing T-shirts and posters for bands and making short films on my laptop. I loved music and wanted to be connected to it somehow, but without actually having to master an instrument. The idea of directing for a living seemed laughable back then.

What was your first job, or first significant break in the industry?
It was my senior year in college and I was panicking because I had no idea what I was going to do for a living. I was designing T-shirts for a band called Taking Back Sunday at the time. They saw one of my short films and asked me if I wanted to direct their next video. They were between record label contracts, so they only had about a $1,000 budget, which seemed like a small fortune to me. It was for a video called Set Phasers To Stun and I did a Spike Jonze-style video with a bunch of kids in a dance troupe.

It’s always surreal when a record label gives you money to make something intentionally disturbing.

Name one music video that inspired you that get involved in making music videos?
The Notorious B.I.G.'s Mo Money Mo Problems video by Hype Williams was seared into my brain as a teenager. Every setup was so massive and overwhelming. I almost had a panic attack the first time I saw it. But I also loved Johan Renck’s New Order videos and what Sophie Muller was doing at the time. It helped me realize that a music video could be more than just a commercial. It could be subversive or ironic or melancholy.

Hype Williams' video for Mo Money Mo Problems was seared into my brain as a teenager.

Name one project you’ve done that was significant as a learning experience – and why?
My first dozen music videos were all major learning experiences. I had no formal education in filmmaking, just a lot of ideas and the patience to design elaborate treatments.

My first big budget was for blink 182’s Up All Night video. We were shooting a suburban Lord Of The Flies concept and there were all kinds of stunts and fire effects. I remember pulling up to set feeling like a big shot, and then realizing that Spike Jonze was down the street filming Kanye and Jay-Z’s Otis video. They were setting off fireworks and drifting in a Maybach, and my crew seemed way more impressed with their shoot. It was a perfectly-timed lesson in humility.

What are your favorite music video-related jobs of the past couple of years, and why?
I did a video for Katy Perry [for Hey Hey Hey] that was exciting because we got to do a Marie Antionette-style period piece with an insane budget for powdered wigs.

The video for Katy Perry's Hey Hey Hey had an insane budget for powdered wigs.

I did a video for Bleachers' Alfies Song that was an homage to the final scene from When Harry Met Sally, which is one of my favourite romantic comedies. I did an Ava Max video that comes out in a few weeks that I’m especially excited for because it’s our third video together and it’s been so fun to watch her grow as an artist.

What are your favorite other jobs of the past year or so?
I shot a video for Joywave, Half Your Age, in December that was a fake prescription drug commercial that goes haywire. It ends with world literally exploding. It’s always surreal when a record label gives you money to make something intentionally disturbing.

I shot a Mabel video for Boyfriend in January of this year that was especially cool because all of her visual reference points were 90’s R&B, like TLC and Aaliyah.

What are you currently working on - and how has work been affected by lockdown?
I sold a scripted TV series to an American TV network earlier this year with my friend Brooks Wheelan, who used to be on Saturday Night Live. We’re writing the pilot right now over Zoom.

I also just finished a music video for Jonas Blue and Max called Naked. We shot the whole thing during lockdown. We sent both artists a camera and a small lighting kit and my DP, Dannel Escallon, taught their parents and siblings how to light them over Zoom. A really talented UK designer, Gemma Yin, did some incredible post work. We spent more than 30 hours on Zoom, so I’m surprised I’m not permanently cross-eyed now.

What kind of work would you like to be doing in future?
I shot a feature film for Netflix a few years ago called Opening Night. I was grateful for the experience, but it was a miserable production. I decided from that point on that I only wanted to work on longform projects where I either had more creative control, or was working with people that I saw eye-to-eye with creatively. For now I’m just concentrating on this TV pilot and doing videos and commercials.

What advice would you give someone entering your field?
Cultivate a deep bank of artistic references. Watch old movies, read classic books, immerse yourself in art history. I meet too many new directors whose only artistic inspiration comes from After Effects tutorials on YouTube.

Tell us something that we don’t know about you...
I have always had a fear of flying, and every time I book a job in London I’m equally excited and full of dread.

When you’re not working, what do you like to spend time doing?
I run every morning at the Rose Bowl, I read, I scroll Twitter obsessively.

Where did you go on your last holiday (or vacation)? And where would you love to visit?
My wife and I went to the Dolomites in Italy. I’d love to go to Russia and take a tour of old Soviet buildings.

I watched Adam Curtis’s Century of the Self... now I hear all of my thoughts in his stoic British accent.

What are your favorite currently-running TV shows?
I’ve been watching this brand new show on Netflix called Friends. It follows the lives of six white people in New York who all frequent the same coffee shop. Fascinating stuff.

What’s the best movie (or movies) you’ve seen recently?
During lockdown I tried to watch all of the movies I hadn’t seen yet on the Sight and Sound 100 Greatest Films list. I loved Treasure of The Sierra Madre.

I also just saw Ace In The Hole, which is a lesser-known Billy Wilder film about media manipulation that seems like it could have come out this year.

Ace In The Hole... a film about media manipulation that seems like it could have come out this year.

What are your favourite music videos by other people in the past year?
There’s a whole generation of new rappers who aren’t afraid to take wild swings with their videos. The Lil Nas X video for Panini and the Roddy Ricch video for The Box are good examples. I love when artists don’t take their “brand” too seriously.

Favourite music artist(s), and favourite gig(s) in the past year?
Yesterday I listened to Daft Punk’s Alive album, closed my eyes, and pretended for a moment that quarantine didn’t exist. It was the best gig I’ve been to in 2020.

Best book you’ve read, and/or best exhibition you’ve seen recently?
I’m really enjoying Camille Paglia's Sexual Personae. Jia Tolentino’s Trick Mirror has a chapter on the narcissistic tendencies of social media that I think should be required reading for all of humanity.

I just watched Adam Curtis’s Century of the Self miniseries on Youtube and now I hear all of my thoughts in his stoic British accent.

Trick Mirror has a chapter on the narcissistic tendencies of social media that's required reading for humanity.

Favourite food and/or favourite restaurant(s)?
Zankou Chicken is a shawarma chain in Los Angeles that I only allow myself to have if I’ve had a truly miserable day.

What’s your favourite political or charitable cause, and why?
Vote Save America is an organization that helps register Americans to vote and educates them about the issues that are at stake in the 2020 election. There are so many important things going on in the world right now. But one simple thing we can all do as citizens in representative democracies is vote for politicians who aren’t bigoted ethno-nationalists.

Best recent purchase?
I’m rethinking my relationship to consumerism these days. That being said I still buy way too many sneakers. Nike Air Max 1’s and Nike SB Dunks especially.

Work & Life - balance/ imbalance out of five (1 for imbalance; 5 for balance)?
I’m going to give myself a 4 out of 5 because I’ve come a long way. I used to be incapable of relaxing, and now I can sip wine in a bubble bath like a pro.