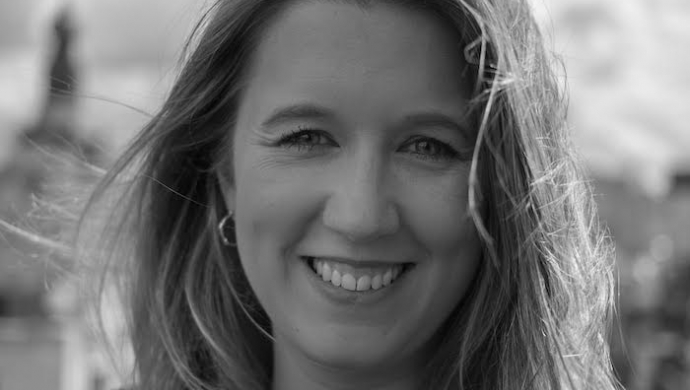 Meg Thorne has been one of the busiest editors working in music videos for the past couple of years, building an enviable reputation in the process. Her work on videos for Lily Allen, Mabel, Jessie Buckley, whenyoung, and others, led her to be promoted to full editor at Cut+Run in May 2019. Since then she has edited a series of acclaimed videos, including for Lewis Capaldi, Editors, Stereophonics' and the MVA-winning video for Ashnikko's Hi, It's Me.

Meg, 32, comes from South Wales, studied at Oxford Brookes University, and now lives in Wandsworth, South London with Jim - her new husband. They were married just before Christmas, and Meg completed our Work & Life Q&A before they left for their honeymoon a few weeks later.

It's not confirmed that they delayed the honeymoon to January so Meg could watch the Gavin & Stacey special on TV at Christmas, but as she makes clear here, she's a massive fan...

How long have you held your current position? What were you doing before this?
I am the latest addition to Cut+Run’s editor roster (woohoo!), having joined as an assistant four years ago.

What was your first job, or first significant break in the industry?
After uni, I was inspired to become an animator. I joined a night class in Vauxhall for a few months and slowly learned it was the story building I preferred over the actual 3D modelling - which lead to my passion for editing.

I joined the Farm Post Production as a runner and left as an assistant editor after a couple of years in my mid-20s. It was a great starting point for me where I got to grips with editing and met some amazing people in the industry.

"I was inspired to be an animator - then I slowly learned I preferred story-building."

Name one music video that inspired you to get involved in making music videos?
As a teenager I probably spent 90% of my weekends sat in front of the TV watching MTV. My friends and I would learn the dance routines to a load of videos ranging from Spice Girls and Madonna to the dance in Weapon Of Choice by Fatboy Slim - bloody loved that video!

Name one project you’ve done that was significant as a learning experience – and why?
Probably the first music video I did with Holly Blakey. It was a song called Weak by Wet and it consisted of the artist alone in an empty space doing choreography. It was the first time I’d cut something that had no narrative and really opened my eyes into the beauty of film and movement.

"Holly Blakey's video for Wet really opened my eyes to the beauty of film and movement."

What are the favourite projects (music videos or otherwise) you’ve worked on in the past year or so?
I love comedy and when I read the treatment for Greg Ohrel's Frankenstein [for Editors] I knew I was in for a treat. Bringing 'Beyoncé' back from the dead? Sure!

I also had so much fun working on Ashnikko's Hi It’s Me, directed by Lucrecia Taormina. We’ve done a few videos together and her treatments are always so exciting to read and she pulls it off every time. That video also won an UKMVA award this year [for Best Pop Video Newcomer] so we were chuffed!

"Lucrecia's treatments are always so exciting to read and she pulls it off every time."

What are you currently working on?
I’m afraid if I tell you I’d have to kill you (NDA’d commercial…)

What kind of work would you like to be doing in future?
I recently co-edited a documentary for Depeche Mode - SPIRITS in the Forest, directed by Anton Corbijn - which was a great challenge! I tend to work on commercials and music videos, which are usually turned over in a week or two. But this longform project for Depeche Mode had been ongoing for over a year. We recently watched the finished product in the cinema, which was amazing!

What advice would you give someone entering your field?
Be patient and never give up. It's hard and there'll be many late nights waiting for you, but if you're driven and have the passion you will whizz through.

Tell us something that we don’t know about you…
I'm utterly obsessed with fried chicken.

When you’re not working, what do you like to spend time doing?
When I can, I like to get out of London for the weekend, either catching up with friends or going on a city break. Travel is a big thing for me and I like to explore as much as I can.

"I just got married. My husband (lol... that sounds weird) and I are off to Kenya for our honeymoon and I am soooo excited!"

Where did you go on your last holiday (or vacation)? And where would you love to visit?
I went to South Africa in February last year and I think it’s the most amazing place I’ve ever visited. Friends got married in Cape Town so we were there for part of it, followed by a week relaxing and drinking in the winelands. More importantly though, I got married a few weeks ago and my husband (lol... that sounds weird) and I are off to Kenya shortly for our honeymoon and I am soooo excited!

Your favourite music videos (by other people) in the past year?
I'm a huge fan of Ian Pons Jewell's work and love his Beardyman video. It's hilarious...

What are your favourite currently-running TV shows?
I recently finished watching Succession - a must-see. Also I rewatched the whole of Gavin & Stacey before the Christmas special… mind blowing!

What’s the best movie (or movies) you’ve seen recently?
The last movie I saw at the cinema was Knives Out [directed by Rian Johnson]- great thriller and great cast.

Favourite music artist(s), and favourite gig(s) in the past year?
Ha, so minimal last year due to the wedding! I did go to the Tina Turner musical with some friends a couple of months ago and loved it!

I also went to a concert of a very old solo artist, as it was my late fathers favourite - but I’m too embarrassed to say who it was...

Best book you’ve read, and/or best exhibition you’ve seen recently?
Every year we go to the Wildlife Photographer of the Year exhibition at the Natural History Museum. It’s become a bit of a tradition and it gets better every year!

What’s your favourite political or charitable cause?
Battersea Cats and Dogs Home, and Cancer Research

Best recent purchase (send photo, if poss)?
My husband is as childish as I am, and so I bought him a glorified treehouse for Christmas (I’d love to lie and say that’s me in the picture, but I’m too honest - I stole it from the internet).

Here are the nominations for the Newcomer music genre categories at the UK Music Video Awards 2021 - including director, production company, commissioner and label credit information …

Rock outfit Modern Error's frontman Zak Pinchin has directed an avant garde fantasy for the band's return to action with The Truest Blue.

Their first collaboration with Hello launched her album 25, and became the fastest video to reach 1 billion views on YouTube. Now Adele reunites with Xavier Dolan to create the opening …

A young man struggles with the perceived notion that the whole world is against him, in Seb Tabe's …