WIZ on Kasabian's 'Psycho': "It was out of the comfort zone" 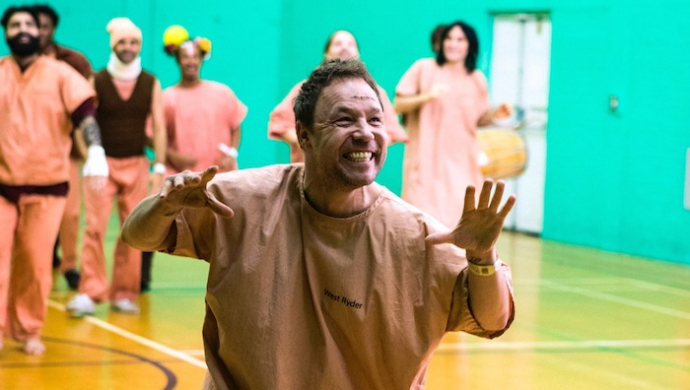 WIZ has thrown a curveball with his new Kasabian video - he's made a comedy.

So we asked WIZ what persuaded him, a director whose work is so cinematic, and usually so serious-minded, to riff freely on One Flew Over The Cuckoo's Nest, channel the Marx Brothers, and add Noel Fielding and Stephen Graham to the mix for You're In Love With a Psycho. On-set photography by Ali Tollervey

Did the song completely determine the approach? In other words was One Flew Over The Cuckoo's Nest in the brief?

Serge’s British sensibility instinct was for something darkly funny, which was a nice coincidence as I’ve recently rediscovered the subversive genius of Spike Milligan.

Hearing the song instantly gave the sensation of ‘alter ego’, and initially it was going to be an actual marriage between Tom and Serge. But between us it developed via ‘Cuckoo’s Nest’ and ‘Duck Soup’ into a freedom fantasy, albeit with the harsh reality of Stephen Graham’s character remaining by the end mentally imprisoned. Yet the intention was for the journey to be empowering. We laugh with and not at the patients, we as an audience should have an insight to this pain.

"Serge’s instinct was for something darkly funny, and coincidentally I’ve rediscovered the genius of Spike Milligan."

How did you feel about going more comedic/lighthearted than usual?

It was a real challenge, right out of the comfort zone. Let's face it, I’m not famous for my comedy directing - at least not intentionally - but I’ve always understood that the great directors are actually comedic. Look closely, Stanley Kubrick is a comedy director. And more than anything, Chris Cunningham’s skill is pure comedy.

How important was having worked with Kasabian previously in the execution?

Hugely. Respect and trust and a shared shorthand - and this includes Sony as well - allow for great creative and accurate freedom. You can get under the skin and take the calculated risks that allow resonant work.

"The intention was for the journey to be empowering."

When did Noel Fielding and Stephen Graham come on board?

The idea to cast Noel came immediately – perhaps not surprising, as I know them both, see them together all the time. It was actually Dan Miller at Sony who sagely suggested the might of Stephen Graham to play Tom’s ‘Mr Hyde’.

Has your recent experience working in theatre impacted on the making of Psycho?

Very much. In fact most of the other cast including the mesmerizing Emmie Spencer playing the matron character, are drawn from the theatre where I work. As well the inspiration for referencing Duck Soup in the first place comes from the improv mirror game that every actor knows. And also with theatre the primary communitive importance of physicality is very applicable to screen comedy.

"I’m not famed for my comedy directing - at least not intentionally - but I’ve always understood that the great directors are actually comedic."

DoP Adam Suschitzky and myself had a rule: if we start thinking about atmosphere and texture, then we’ve lost it: keep the camera still, with a wide lens, and let the physical performance rule.

A thief plots to steal the goose that lays golden eggs, but things go awry, in this intriguing …

KC Locke brings some iconic symbols of luxury living to a warehouse setting, adorning the …

Big Zuu, JME and Novelist mete out some revenge on their haters in Edem Wornoo and Claymation …