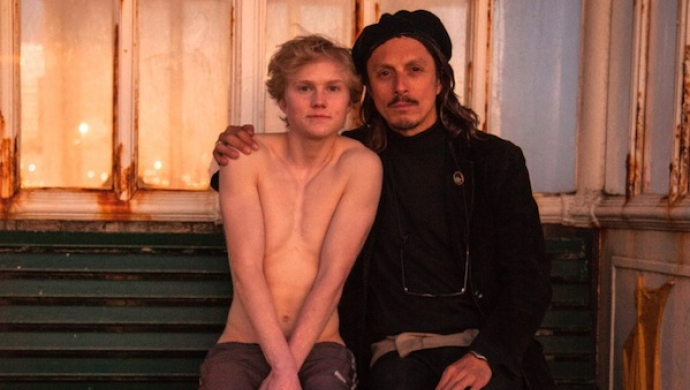 WIZ and Will Young have been making music videos together for almost a decade, coming up with exceptional, often surprising work. But now the video for Brave Man is arguably Young's most talked-about video ever. We talked to WIZ about how he distilled the courage of a young transsexual's journey from one gender to another, into a naked walk through the streets of Brighton. On-set photos by Ali Tollervey.

How did the idea for the video come about? Were you wary about proposing an idea to Will Young in which he is not a central character?

For good or ill, I have a David and Goliath complex. Every day I walk past a LGBT suicide memorial. Every day I walk past the ocean and reminded of the aching Who lyric: "The beach is a place where a man can feel, he's the only soul in the world that's real." I have a transgender friend who I’ve watched successfully navigate their transitioning journey, which I found incredibly inspiring and humbling.

Last year I wrote a short film with these and other feelings in mind. Will came to me wanting to make a transgender-themed video, I showed him the script which he loved, and then he improved it. Also of course he brought to the table his emotive song Brave Man. By the way, isn't Will Young one of our truly great British soul voices?

"I have a transgender friend who I’ve watched successfully navigate their transitioning journey, which I found incredibly inspiring and humbling."

Initially Will didn’t want to be in it as he felt his presence would distract, but I insisted knowing that between us (and this comes from mutual trust) we could pitch a performance that was sincere, informed the narrative but without overpowering it.

Also it’s important to say that along with Will, his management and Island Records committed 100% to the concept. ‘Fuck the Daily Mail!’ was one of the conversations. As I’ve said before to my mind Will in his own way is as provocative and important artist as a Lady Gaga or a Nick Cave.

We all understood from the beginning that this project needed to be conducted with utmost authenticity and integrity, so there was no question of not using real locations and not casting a trans actor. And this would have been impossible without the authority and collaboration of Fox Fisher, a highly respected trans activist and filmmaker. As soon as Finn the lead guy walked into the casting I knew we were blessed and our aim was true. His inscrutability and inner grace personified the character.

"As soon as Finn - the lead guy - walked into the casting I knew we were blessed and our aim was true. His inscrutability and inner grace personified the character."

You shot the video in the middle of Brighton. When did you shoot it, and how did you overcome the challenges that came with shooting the idea? And did you have any difficult moments?

The biggest challenge is it’s a work of fiction, expressing very real experiences and engaging real people. We wanted to show the defiance of a character as he is met by vulgarity and brutality, resolving with a catharsis. And achieving this unflinchingly yet with sensitivity and without sensationalism was a great responsibility. Will, Fox, producer Scott O’Donnell, excellent commissioner Tamara Brooks, the actor Finn and myself, shared many rigorous meetings discussing the issues at length.

Regarding the actual shoot, initially for realism I wanted to shoot on a weekend. The brilliant 1st AD Dan Gibling strongly persuaded me against and we went for a Thursday. However we didn’t know that it was a Fresher’s night, so it was just as heaving and inebriated as any Saturday. Thankfully our robust security helped life from getting to dangerously close to art. Having said that, overall Brighton was very generous and accommodating, something I think pertinently we would have struggled with in London or other cities.

The idea of exposing of oneself and then having to face what that brings – embodies the idea of being Brave. Is there any other message that you’d like people to draw from it?

It's often unhelpful to spell out one's intentions for a film, as the meaning resides in the viewer and how they react – as well as the risk of reducing complex issues to sound bites. But we’re encouraged with the way the film has modestly stimulated further debate, which along with showing a human story was one of our aims.

You’ve recently been working as a theatre director (and won a prize). Is that the first time you’ve worked in live theatre, and did that experience have an impact on how you approached this video?

Well, maybe I thought it was time to do some real directing. And it was terrifying as it was exhilarating. No producer to wipe your bottom, no camera or editing to hide behind. But ultimately the principles are the same: a cast, a story and you. And perversely I plan to adapt one of my all time favourite movies (clue: it deals with gangsters and gender fluidity) into a play for the Soho Theatre.

Dougal Wilson on Morris dancing with Stealing Sheep: "I was trying to say ‘Isn’t this cool?"