"Violence fascinates me" Isaiah Seret on making the video for MGMT's Cool Song No.2 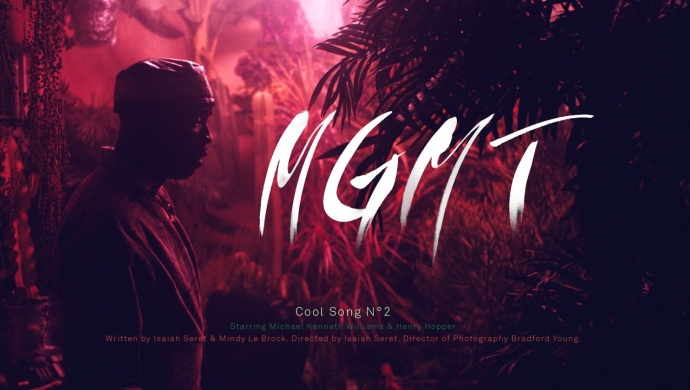 Unless you haven't seen The Wire, who can forget Omar Little, the Lone Ranger of the ghetto? Michael K Williams created an unforgettable character with Omar, and having followed up with another well-respected role in Boardwalk Empire, it's no surprise that he delivers a compelling performance for Isaiah Seret's futuristic carnage bumper for MGMT's Cool Song No. 2.

This is stylised narrative at its best, demonstrating that as well as Williams, Isaiah is a man at the top of his game. Underlit Porsches, PVC-wearing drug-cutters, and golden houses built in the desert – the video is a visual feast. And then there's the story, which develops in unpredictable ways - from gangster film to sci-fi shocker to love story.

With narrative-led music promos it's sometimes easy to forget the song, band or original purpose of creating a visual. Not so here, as Isaiah has cast members perform key lines whilst going about their day-to-day business of creating a future drug our children should steer well clear of. Violence clashes occur in some of the most stylish yet unique garments our shops have never seen – as Isaiah explains on his website. It's the little touches like this and many others that allow the stirring story of love, pain and regret to blossom.

Should this be a full length feature-film? Possibly. Would we like to see more of Isaiah Seret? Most definitely. We caught up with Isaiah in a soul-searching interview where we discussed a pacifist's take on violence, what it took to complete a project of this scale on a budget and how and why they ended up shooting in the desert.

I read you came up with the concept for this video having just finished a commercial shoot in South Africa, did the story evolve or stay very much as first thought?

When we wrote the treatment, Mindy (my co-writer & stylist) and I were sitting in the Port Elizabeth Airport, totally stuck, no flights out. So we would write, and then try and deal with our tickets, and write some more. By the end of the day, we had a treatment that is really close to what we see on screen. I would say most of the changes came during casting and scouting, which added a lot of depth to our characters and scenes.

This was obviously a mammoth production, did the result match your expectations?

Originally it was a bit more sci-fi, and we were planning on building a lot of sets, but the reality was we had so little money, sets weren't an option. At the same time, I discovered this artist, Robert Stone, who had built this place in Joshua Tree. Honestly I didn't even want to shoot in the desert, but seeing this home was like finding a missing cast member. But the artist had never let anyone shoot there, from Beyonce to Rihanna, since he didn't want his house branded as the "Rihanna" house. But I wrote him directly, told him my story, and somehow he loved it, and let us shoot there. So the location enriched our world, and also became the bones for the drug room and so on.

Pain and suffering are reoccurring themes of yours often told through violence, why do you think these themes have struck such a chord in your creative imagination?

I am really drawn towards understanding violence, both pre-meditated and impulsive acts. Maybe it's because I'm a Buddhist, pacifist, but it fascinates me. I use it on screen as a way to bring characters to feelings of regret and loss. Basically, some form of heartache. Heartache is the best, in particular because it's one of the few emotions that triggers people to genuinely change their lives - to reevaluate everything - or take a full moral inventory. A person with a broken heart, or filled with regret, can fully transform who they are.

But arriving at that place with our character is a little tricky. Usually you break a person's heart through the loss of a relationship or loved one, but I feel committing violence on another's behalf, or as a duty, also gets us there. In this film we do both - the soldier like violence, and the loss of a loved one.

Actually the director Alejandro Jodorowsky once said, "You can't have spirituality without violence."

Michael Kenneth Williams is known for his intimidating roles in The Wire and more recently Boardwalk Empire, what did he bring as a critically acclaimed actor?

Michael has perfected the quality of gangster vulnerability - which has clearly fascinated folks who enjoy his shows. And in this film, Mindy and I wrote a character that is the most sensitive gangster on the face of the earth. He is violent, but every action destroys him. Michael really loved this and really merged with that role. I mean, you can see it in his face when he is strangling the man at the gate. I've never seen him go that far, actually.

There is a running theme of The Wire characters in your videos. Having previously hired Chad Coleman, would you consider the show an influence – and is it going to continue?

Saul Levitz, the video commissioner at Columbia Records, told me we are two for two on The Wire-casted music videos, so we are taking polls for who's next. He's voting for Bunk, and I'm thinking Stringer Bell. But, in terms of strong TV influences, I think I'm more a Deadwood man.

So many aspects of the promo are captivating, how important was it to have such an experienced and talented team behind you?

I mean we always want to work with great collaborators, like cooking with artisinal ingredients, but with this job in particular, I needed people willing to work incredibly hard for no money. Which is OK if we are all learning, but since every aspect of the video was technical, I really needed super-talented people involved or it would have been a huge mess. However, with the exception of Barney, who did the prosthetics and who I didn't know before, I only forced my close friends or people I have really built a good working relationship with to work on this.  Most importantly these are folks who have good attitudes, but still go the extra mile to make something special. And in the end, when the workload was really crushing, I had to promise not to take another job like this for a long while.

Lastly, in terms of talent, I knew that with all these great image-makers we would have something aesthetically strong. But at the core, Mindy and I didn't want to make a stylized "music video", we wanted an emotional narrative. So we absolutely needed actors that wouldn't get overpowered by the visuals. Michael and Henry Hopper (who played the lover) were both that calibre of actor. I feel like no matter how crazy the world was that we threw at them, they reacted to it from within the character and made it their own. On film this means everything - it's the moment when it all becomes completely real.

* Check out Luke Tierney's blog, Word Is Cheap, or his Twitter @wordischeap, for more thoughts on his favourite music videos.