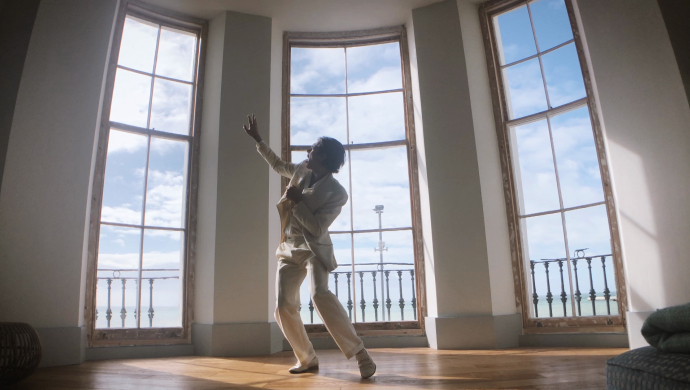 That is exactly what she did with her most recently released music video, for ex-Klaxons member and now solo artist James Righton. What's more, the video for Start was created with no crew whatsoever, making it something of an outlier in regard to shooting music videos during the pandemic crisis. If you overlook the fact it was shot mostly outside on a deserted seafront in East Sussex, that is.

But this was definitely a one-woman job, and not just in the shooting. The Righton video is also another excellent example of Sophie Muller's other less-appreciated skill as a music video editor. And in this case, the video also benefits from her willingness to experiment with the VFX plug-ins that come with her editing software.

As she is currently in lockdown at her home in London, I spoke to Sophie on the phone about the making of the Start video, and discovered that this is not the only video she has shot on an iPhone. It turns out that she has lots more prior experience creating big mainstream music videos on domestic camera equipment too.

Our phone conversation began with me explaining my own ongoing attempts to commission a video with a band self-shooting a visual for their upcoming single, using a mixture of non-professional cameras, potentially including Super 8mm.

I don't know why people are so in love with the idea of film.

SM: It's a long time since I've shot on Super 8mm. I don't bother with that. Why not get a Super 8 app for your phone? It's brilliant. I shot a video for The Kills, for Heart Of A Dog, and we shot some of that on Super 8. Then I shot some more on my iPhone, on a Super 8 app, and no one could tell the difference. The only thing I don't like about the app is the fake dirt, but you can minimize that - which is what we did on that video in post.

DK: How much have you used an iPhone to shoot music videos before the Righton one, apart from The Kills?

SM: James's video was my first one [in full]. I actually made it about a year ago, last April, in St. Leonards [next to Hastings, on the East Sussex coast], which is why the weather is as it is in the video.

The reason that I made it on an iPhone was down to the first Shakespears Sister video I made last year, in the desert [for All The Queen's Horses]. That shoot was in February, and we shot it mainly on an Alexa. But there was one scene where they were out and I had my phone, I put it on the black and white app, and I shot it - a take. I looked at it back, and I went, "Oh my God, that's absolutely amazing!" And I was zooming into it, and it never deteriorated, even if you zoomed in like three times as much. So it occured to me that if you use an iPhone properly - not just chucking it around and everything - you can do really good videos.

So when James said: "Will you make the video?", I said, "Why not come down to St. Leonards. It's going to be very beautiful weather. Let's just work there." We didn't want anyone else to be in it - you'll notice there's no one else in the video. So we just got up at 5:30 in the morning and shot a bit at night, when there wasn't really anyone else around. And so that's just what happened. We just sort of made it up as we went along.

When you said, 'shoot it properly', what do you mean?

I mean mindfully. I shoot lots of stuff on iPhone anyway, but I don't think about shooting it for purposes beyond recording family pictures, or 'that's a lovely scene'. So what I mean was trying to do things like tracking shots, trying to conceive of a way of doing something exactly how I would do it, if I had a crew with all the equipment. And making that judgement of, okay, this shot can be used like now, and if I do this shot like this, that looks better than if I did it like that. And I've got these little lenses, little screw-on lenses. That was using my iPhone 10, by the way. That was before the 11 was around.

Do you use some kind of device to hold the iPhone, other than your hand?

Yes, I've got this thing: it's like a square frame, and it's got two handles either side. You put the iPhone in the middle. So that means on either side you've got handles, and that it's very steady. Cost about £10. I don't know what its called [probably a Ulanzi U-rig Pro Smartphone video rig] but I use that. I have a couple of wide-angle lenses on it too, one which is kind of a fisheye.

As I said, James was just up for it, and he's got this beautiful white suit. So we basically just walked around St. Leonards for one evening, and one morning, and then the bit where he plays at the bar [Sophie co-owns a bar in St. Leonards]. So it was just really fun to do it.

After making the video with James I thought: 'let's just use iPhones and spend all the money on art department.'

I was kind of amazed that it was shot on an iPhone. I really don't think you can tell.

I was just trying to make it as beautiful as possible. Because the weather was really beautiful. The sky is beautiful. Most of the time it's just literally outside, like right on the beach exactly kind of where we were staying. And then there's this place where there's the beautiful big windows - the flat of a friend of mine. We were probably there for like twenty minutes or something. It wasn't a very long shoot, but enjoyable. I managed to have a nice dinner and get drunk on tequila the night before, but was fine.

I think it's kind of inspirational for people, to see what they are able to do at this present moment.

SM: Yeah, exactly. And that was before I found out how you are actually supposed to do it. The thing with an iPhone is that it fluctuates the aperture, and you can't really control the fact that it kind of compensates for light. That's what often gives it away. There's an app called FiLMiC Pro that if you film it through that, you can actually control that. But I didn't know that then.

You have used the iPhone to shoot stuff since then?

I then went on to make that Easy Life video [for Earth, which she co-directed with Ross McDowell], which was set in the rubbish dump. Did you see that one? That was done on iPhone as well. Because having done the video with James my thinking was: 'let's just use iPhones and spend all the money on art department.'

The problem with the Easy Life one was that we were shooting that in Morocco. It was 103 degrees and phones don't work in that heat. They just pack up, and you have to keep putting them in an ice bucket. So that's not much fun.

But then in October I got this call from LA about making two Selena Gomez videos, and Apple iPhone were supporting it. So so we then made two videos on iPhones - Lose You to Love Me, and Look At Her Now. They were both made on iPhones - one's black and white, one's colour. That was then used as a kind of commercial for iPhone - for the 11 Pro.

Well-exposed 35mm looks exactly like digital to me. I honestly can't tell the difference.

Have you shot anything on it since?

Yes, I made a video for Blake Shelton and Gwen Stefani in December, for Nobody But You, when all the stuff with them, the natural stuff is shot on the iPhone. Not natural, just stuff that's not in the studio.

It's a bit like how I was about the HVX. Remember that camera? It was around 2000, I think. I suddenly realized that you didn't need to have the whole camera package if you just used this little video camera. I made loads of videos on that.

Was it a DV camera?

That's right, DV tapes. I made a Garbage video, a Rufus Wainwright video, and loads of other stuff on this HVX camera that wasn't considered a professional camera - but I thought it was amazing! [Sophie then looks it up on Google] Here it is...The Panasonic HVX 200 - full HD. There's one for sale on eBay. I might buy it actually - I had two, and both were stolen. The first one, which used the DV tapes - that was really good.

There's a Rufus Wainwright video I made for Going To A Town. I think that was the first one I actually made totally on that, and it looks amazing. I defy anyone to say that's not Alexa, or any of those things.

You definitely seem to be flying in the face of accepted wisdom about film as a medium, especially in music videos. So many directors regard it as being superior, and looking amazing.

Does it look amazing? I mean, maybe badly-exposed 16mm has a sort of thing. But, well-exposed 35mm looks exactly like digital to me. I honestly can't tell the difference, and I don't know why people are so kind of in love with the idea of it.

Unless there's certain sorts of film that look credible. One is reversal, which I have a stock of. But that's only going to used on a very special idea. And that's obviously great. But a lot of that stuff, it just looks like digital anyway. It doesn't look... different, which is why I hated film in the end because it just was so plastic-looking.

Any advice to other filmmakers (or indeed artists) trying to make a music video during lockdown - and using their phones to shoot?

It's just about courage and choice. Everything and anything works and fits - if the atmosphere suits the music.

• Sophie Muller directs (most) music videos through Prettybird in the UK and US. She is represented in the UK by Hands London.