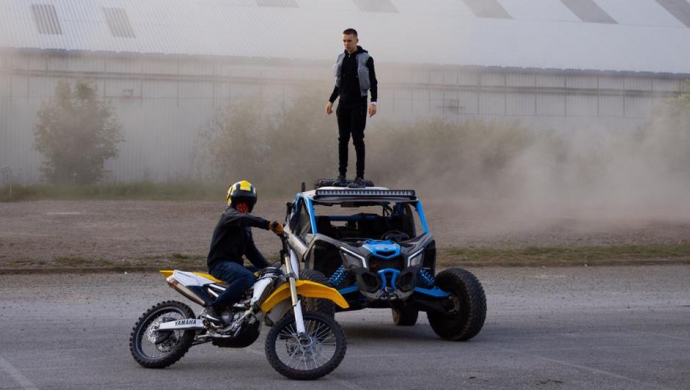 Lewis Nicholson stepped into an unprecedented situation last month, producing two of the first videos to be made when lockdown restrictions on filming began to be eased.

Manchester-based Nicholson became an outlier for the new reality of music video production when he marshalled the KC Locke-directed videos for Mancunian rapper Aitch's Raw and 30 in quick succession.

We talked to him about the experience of being a post-lockdown production pioneer - the challenges and stresses of shooting safely in the midst of the pandemic; and the big take-aways of these first steps towards a return to normal filmmaking.

Promonews: How did the process start in making the videos for Raw & 30? When did you know that you had the ability to do a proper physical shoots?

Lewis Nicholson: Aitch released his new EP Polaris, which charted at number 7 in the UK Album charts. Aitch’s management reached out to KC at the start of May with the two videos in mind and the creative discussions began. The same week the Advertising Producers Association (APA) released the COVID-19 APA Shooting Guidelines which kick started us as a production company to take reasonable and practical steps to safeguard everyone attending the shoots. The safety of talent and crew was at the forefront of our minds at all times, it was imperative for us to go above and beyond the guidelines.

Above: Lewis Nicholson (right) and KC Locke (left) on the Raw shoot

The safety of talent and crew was at the forefront of our minds at all times. It was imperative for us to go above and beyond the [APA] guidelines.

With the requirements of social distancing, PPE, etc, how did you address the main challenges of a physical shoot? Was there help/advice that you could call upon, to figure out solutions?

There were numerous new measures laid out in the APA guidelines for us to safely put together these productions. We used these as our Covid shoot bible, a few of the measures in place on the day included but not limited to:

●  No paper was allowed on set so we had to ensure all call sheets / schedules were available digitally.
●  All catering was individually wrapped and there were no self-serve facilities.
●  The location and equipment needed to be fully sanitised and left for 72 hours before and after we used it.
●  Any set builds had to be undertaken separately by one department at a time.
●  All styling and makeup to be done by talent themselves.

What if a member of the crew or even Aitch was to fail the temperature test?

We also recognised that everyone on set had a big part to play in protection against the virus. With this in mind we sent out a health declaration form for all crew to sign. This ensured no one was displaying any symptoms or had been in a high risk area at any point in the 14 days prior to the shoot. We also sent out a list of rules that the crew themselves were responsible for:

● Maintain social distancing at all times - two metres apart.
● Wash your hands or use hand sanitiser for at least 20 seconds as often as possible.
● Cough and sneeze in the crook of the arm or into a tissue and bin immediately.
● Report any COVID-19 symptoms to Klash Productions prior to the shoot day.

As an additional precaution we also took the temperature of all cast and crew with a contactless infra-red thermometer before entering the set. As the producer this concerned me before the shoot day. What if a member of the crew or even Aitch was to fail the temperature test? In case the crew were showing a high temperature we had local crew on standby. However, if Aitch had had a high temperature then we wouldn't have been able to proceed and would have been forced to postpone the shoot. Thankfully he was cool on the day!

Raw was our first production after a 12+ week break. That’s massive.

What were the biggest issues you faced before the shoots, and on the shoot days? What did you learn from the first shoot that you could then implement in the second?

For us the health and wellness of everyone attending the shoots was the most important thing. We love what we do and couldn't wait to get back to production. We approached this with caution and only went ahead once we were fully confident we could do so in a safe and practical manner.

The first shoot was a learning curve. For many of us it was our first production after a 12+ week break. That’s massive. On Raw, we had a very controlled environment, and a large space so it allowed us to see what was working and what needed more attention when thinking about social distancing, PPE, travel and washing our hands. Doing the first shoot in this way meant we could test a lot of the guidelines [production manager] Ella Taylor-Palfrey and I carefully laid out. We definitely brought learnings from this to the second shoot where we were working across multiple locations.

Across both productions we kept crew numbers to an absolute minimum and didn't have any extra people on set. We’ve built up a strong team of freelancers. We trust them to work within the rules set out in our health and safety plan and without the extra support from additional crew. The success of the shoot was really down to the team on the day. They followed guidelines and took them seriously but without it having an effect on their work or creativity.

If anything the restrictions only enhanced the creative.

Pro motion were excellent when it came to equipment. They delivered everything direct to location the day before for a contactless delivery. They then disinfected everything before handing over. We had our 1st AC Danny Usman check over everything to make sure we were not missing anything ahead of the shoot. After shooting Pro motion collected the equipment and quarantined it for 72 hours before checking it back in.

What impact did making the shoots Covid-19-safe have on the budgets?

For each of the shoots we hired an extra member of crew to take on the role of ‘PPE Assistant’, and it was their responsibility to ensure everyone on set was provided with PPE and used it at all times. We also had to include additional budget for PPE (face masks, individual sanitisers, gloves and antibacterial cleaning products).

Did the regulations around shooting restrict KC’s creative vision?

If anything the restrictions only enhanced the creative. There was an amazing creative atmosphere on both of the shoots.

With the 30 video we were restricted as to how many friends Aitch could have with him in shot. Aitch is a very friends and family-oriented person and the original ambition was to have more of his closest friends on set. Usually this would have been fine but due to current restrictions we had to limit numbers. With this challenge we were still able to overcome this and create a video that didn’t feel like it was being restricted in anyway.

What do you consider to be the most successful aspects of each shoot?

Having a PPE assistant was definitely a success. This took some of the added pressure away from production as PPE was their sole responsibility. Everyone was given a hand sanitiser and a face mask as the entered set. If anyone’s mask broke (this happened) or they ran out of sanitiser they knew who to go to.

When choosing the location for our shoots we decided to go with the largest space we could find.

When organising catering my PM Ella chose to go for an option that would deliver all crew meals already wrapped and prepped for each person. This ensured that crew did not have to queue up or serve themselves, thus minimising risk. Fortunately the weather was great on both shoots and we were able to eat lunch outdoors whilst maintaining social distancing.

When choosing the location for our shoots we decided to go with the largest space we could find. It is much safer to shoot in a large space or outdoors where possible. It would be very difficult to social distance in a smaller location.

What were the ‘could-do-better’ aspects that you’re happy to flag up?

Plan PPE in advance and have extra suppliers should one let you down. PPE is in extremely high demand at the moment and in significant shortage. Fortunately we were able to source ours in short notice but have since stocked up ready for future productions.

What did you learn from the experiences that you will take into your next productions?

The first shoot was a learning curve for everyone involved. Social distancing is hard. We’re so used to crowding around monitors and helping each other carry equipment, we’ve never had to keep our distance whilst still doing all of this before. But we all recognised it was absolutely imperative that we got this right to keep everybody safe. But naturally, this made some tasks slightly slower on the day.

Moving into our second shoot we made sure we had allocated more time between set ups. We found that everyone had to work at a slightly slower pace to take more care and consideration under the new restrictions.

Social distancing is hard... But we all recognised it was imperative that we got this right to keep everybody safe.

Any suggestions that could be adopted more widely as we move into doing more post-Covid shoots?

I think the main things to consider when it comes to producing as we move into the post-Covid world are:

• Keep crew numbers to a minimum, anybody that is not crucial to the production shouldn’t be stood around on set.
• Limit the artist to how many entourage are allowed on set - anybody not needed shouldn’t come along.
• Buy PPE upfront to ensure there’s no problems in getting supplies before the shoot.
• Reduce crowding around monitors. Have enough separate monitors on set for those that require them.

As production we can follow guidelines but it’s imperative that we educate clients before the shoot so they understand the current restrictions. Everyone involved needs to understand that these post covid shoots are not regular shoots & all parties involved need to adhere to the guidelines that are in place.