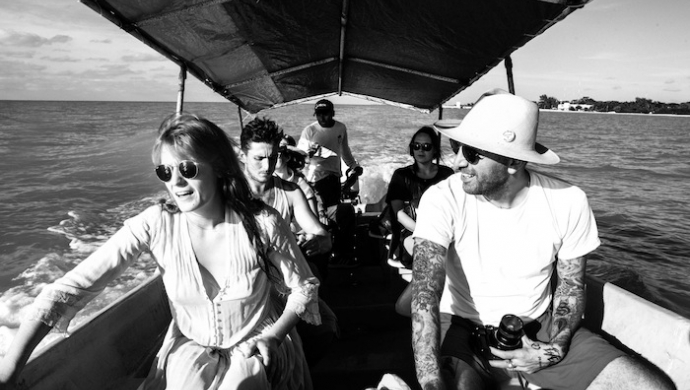 Last week saw the arrival of the Vincent Haycock-directed music video for What Kind Of Man, the first promo from Florence + The Machine's forthcoming album How Big, How Blue, How Beautiful. It's arguably the most daring and emotionally raw visual work from Florence Welch, a musician already renowned for her soul-bearing intensity. It's also the opening chapter of an extended project that will be unveiled through future music videos.

So we caught up with Vincent to talk about his collaboration with Florence, ask him how they made the What Kind Of Man video, and what is to come. On-set photography by Emma Holley.

You worked with Florence on Sweet Nothing with Calvin Harris, and then Lover to Lover – probably her last video project before this one. Have you been in contact ever since? And when did you start talking to her seriously about this project?

VINCENT HAYCOCK: Lover To Lover was Florence's last creative output before her break. We both felt like we hadn't finished what we started on that video. I wanted to continue working with her as an actor – we even spoke about doing a movie or something long form. Once I started hearing demos and speaking to Florence about life between albums, inspirations, heartbreaks, lovers, weather, music etc, we quickly began concepting a bigger story, and the idea of doing an entire album of videos grew organically.

How did the idea for the video come about? And is What Kind Of Man part of a more extensive project, and wider narrative?

What Kind Of Man is an extrapolation of stories that Florence told me about her real life, and themes that this album explores. We wanted something big and powerful for her first single back, so we held back on some of the narrative and let the performance take the foreground.

It’s the first chapter of the How Big, How Blue, How Beautiful odyssey. It's meant to set the tone, establish some of the themes, choreography and visual style for what’s to come. It’s obviously about relationships, but it’s also about Florence traveling through our version of the Divine Comedy. So in essence this video is the first layer of Hell.

How would you describe your and Florence’s creative relationship? And how has it developed since you first started working together?

Like any collaboration the more time you spend together to more trust you have. Florence is really open and honest with me, so it makes the process really easy. I’m able to write ideas that are meaningful to her, and because I’ve made them personal she performs them better. Most of the time she is deeply connected to the concepts.

Florence’s acting in the piece is tremendous and also she shows even more emotional honesty. Is she becoming a proper actress now?

Florence is an incredibly talented performer and one of the most brutally honest people I've ever met. This combo makes good actors in general. She isn’t afraid of anything. I think she’s always been a great actress, she’s just never had any opportunity to show it. I want to direct Patti Smith's Just Kids with Florence playing Patti. I’m working on it...so if anyone knows Patti super-well, tell her were coming for it!

"I think she’s always been a great actress. She’s just never had any opportunity to show it."

You’re pushing boundaries with the nudity and also the choreographed sequence. How did the choreographic elements come together? Were they there from the beginning?

When we started talking about doing this campaign, dance was a big part of the conversation. We wanted to be able to tell stories through the dance that we couldn’t really tell in the narrative. It allows you to explore very heightened emotions. Ryan Heffington choreographed the video and he helped create gestures that explored our ideas. We wanted the choreography to reflect Florence's emotional state. Sometimes she's in love, vulnerable, mean, helpless, hurt, etc... Each gesture defined these various emotions, creating its own narrative language.

As a narrative, it’s very suggestive and non-linear. Did you envision it that way from the beginning of the script process?

We actually shot more narrative but it didn’t feel right to reveal everything upfront or button it up too much. This is the first of many videos that will explore the world we created, so I didn’t want it to end in the first video.

Where did you shoot the video? How important were the locations to your vision for the video?

Merida, Yucatan, Mexico and Los Angeles. Locations are always so important, they set the mood. We purposely set a major part of the video at the Chateau Marmont because it felt more interesting to me than an apartment or a house. It added a distinct Los Angeles backdrop to create a sense of a real life purgatory.

"My goal is to create videos that will follow the music throughout, guiding us through each layer of the How Big, How Blue, How Beautiful odyssey"

The video features a remarkable, shocking, completely unexpected moment - the car crash! Could you give us some idea how you managed to pull that off, without killing anybody?

It’s actually all camera tricks and visual effects. We didn’t even crash a car...its surprisingly easy to do when you hire the right people.

What can we expect from the next Florence video?

I don’t want to give away anything but I will say that this album is really a pleasure to make videos with. It spans a broad spectrum of songs – some are slow and emotional, some are anthemic and raw. My goal is to create videos that will follow the music throughout, guiding us through each layer of the How Big, How Blue, How Beautiful odyssey.

New director Flora Scott teams up with rapper Malik Polo in her debut video for Change, …