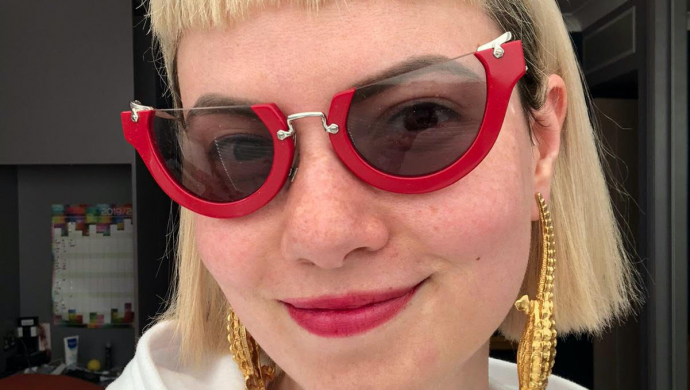 Hailing from Moscow, and growing up in Post-Soviet Russia, Anna Radchenko moved to London several years ago to study at the London College of Fashion, then becoming a photographer specialising in fashion and art photography, before moving into video direction a couple of years ago.

She has also had her first experience of directing remotely - before the Covid-19 created our current lockdown conditions. That was her video last year for Bastille, due to the fact she was nine months pregnant. Now the mother of baby son Sam, Anna now has had to adapt to the current situation...

What were you working on before the lockdown?
I was working with a UK agency, on a commercial for the Russian market focused on family products. It was going to be an amazing campaign for an international brand, and I was really excited about it. We had started talking about all sorts of things, I’m just not sure whether it will go ahead now, but fingers crossed.

What are your favourite music video-related jobs of the past year or so?
Bastille - Another Place. I had carte blanche. They were brave enough to let me be my full creative self, which I loved. Interestingly, I also directed it remotely (I was in London, the shoot took place in Toronto, Canada), as I was nine months pregnant.

With women in the industry not having access to the same opportunities as male directors, I was a little concerned to begin with. But even being pregnant didn’t stop me. I just directed the video virtually through FaceTime, with a co-director on location to execute my vision. I felt more like a creative director, actually. I loved it.

My Michelle - Young and Beautiful. Two nights up the Georgian mountains. The weirdest casting ever. The best hospitality - Georgian hot cheese pies on set, if you know what I mean. But so many production challenges at zero degrees, and so many hours in a row. The result? The producer cried once and the talent cried twice. But hey, it was a very good team-building exercise. I felt like we went to war together and returned safe and sound.

KOKOSMOS has to be up there. It was a personal project, meant to be a purely visual piece. The inspiration was space itself, which as a post-Soviet child meant that it was a big part of my childhood. Growing up in post-soviet Russia, I’d be dreaming about space often and wandering what was out there. I felt that with our space travels it was as if there was an entity we wanted to reach out to. That’s what I wanted to express with Kokosmos: my idea of what space feels like and what this potential entity would look and sound like.

What are you working on now?
During this crisis I’m trying to find a balance of self-care, family time and avenues to make money. As you can imagine, all my shoots have been cancelled. I have an online academy which is mostly with Russian students, but that has dropped by 60%. The government hasn’t been very forward in supporting young businesses and freelancers, so there’s a lot of uncertainty.

As cheesy as it sounds, being so far away from each other somehow has brought us closer than before.

What I’m doing is just trying to find other options for potential new students. Different packages, shorter and more affordable masterclasses. Basically just ways to make the courses more accessible in these trying times. I’ve also been picking up on all those things I’ve left on the side: my website, my portfolio, updating my work.

I should also work on expanding my CGI-led work bringing it up to 50% of what I do. I feel this is the time to get in touch with motion designers and 3D artists to start discussing new ideas and collaborate on projects to pitch during lockdown. I really want to work on videos that are definitely surreal, brave, inspiring and self-reflective. Something that will either make you cry your eyes out or shout WTF.

Name one music video that inspired you that get involved in making music videos?
It has to be Coldplay - Up&Up. Beautifully surreal. It was such a huge inspiration for me. So imaginative and a statement to unstoppable creativity. What I really loved is how a whole world was created without any limitations and I guess this is why I’ve become passionate about using post production in my work. I watched the behind-the-scenes and it was really inspiring. Directing is my playground and working with CGI means there are no restrictions to my imagination.

What's the most surprising, or least predictable thing, that's happened to you during quarantine?
Well, perhaps the most surprising thing is how the question: 'How are you?' has changed in meaning. It now holds a completely different weight, it isn’t just an informal question.

When people ask you that now, you really want to answer truthfully. And when you ask it back, you are not just being polite -  you genuinely want to know. You want to talk, call, have long deep conversations. This was definitely unexpected. As cheesy as that sounds, being so far away from each other somehow has brought us closer than before.

What's the favourite part of your daily routine?
It has to be cooking breakfast with my son Sam! He just sits in his chair and looks at me. Usually I have music on and will sing along to it, using a baguette as a microphone throwing it in the air. He’s probably the only person who has ever heard me sing! He smiles and makes me feel like a star. We just have a lot of fun together.

I used to go out a lot, plenty of social gatherings... things that maybe I didn’t really need.

Are things getting harder/better/staying the same?
Things aren’t getting easier, but I’m finding ways to adapt and experiment with new ideas. For example with my online academy I'm trying out a large free online gathering for 2-3,000 creatives. Probably one of the biggest online experiments I can think of. All they have to do is register online and they will be randomly put into teams of five. They would then get a creative brief on how our relationships and societies are changing due to the lockdown, with two days to put together a presentation for a creative project. There will be a lot of people from different backgrounds (choreographers, photographers, 3D artists, etc) so I’m really curious to see what they will come up with.

What have you been watching, and your favourite music videos by other people in the past year?
Let me introduce you to some Russian talent that I’m particularly fond of:

Synecdoche Montauk - Wherever You Are (Director: Oleg Trofim)

What have you learned about yourself during quarantine?
One thing I’ve realised is that I’ve been a bit spoiled. What I mean by that is before, especially thanks to the online academy, I was able to easily invest money into my personal creative projects. Now I’m just not in the position to do that. I’ve also started re-evaluating how I invested my time. I used to go out a lot, plenty of social gatherings, live music, art exhibitions and restaurants. Now it seems so artificial; things that maybe I didn’t really need.

How's your Work/Life balance at the moment?
Well, because of Sam I’m thankfully able to maintain a fairly consistent routine. He has no idea about what’s going on - he’s six months old) and couldn’t care less about what a lockdown is! It’s good, it allows me to stay focused which I know is challenging in a situation like this. Before the lockdown I felt that having a baby while still focusing on my career made things harder for myself. Now, I’m very grateful for my son. It’s just so encouraging to see this happy little human smiling at me. It just completely lifts the mood.

• Anna Radchenko is represented for music videos and commercials by Kode Media. Watch her showreel here.