Oscar Hudson on Bonobo's No Reason: "There are no VFX whatsoever" 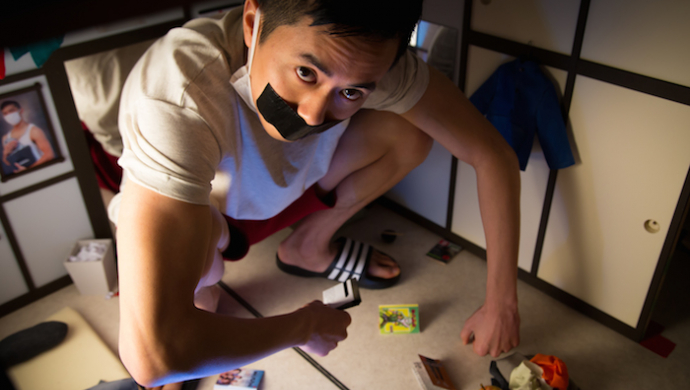 With his first music video since winning the Best New Director award at the UKMVAs last October, Oscar Hudson has moved squarely into 'How did they do that?' territory.

His video for Bonobo's No Reason is one of the rare moments when the viewer starts to question the evidence of their own eyes: the same bedroom of a Japanese teenager keeps appearing, even though the camera keeps moving forward - and it seems to be getting smaller. But that very genuine-looking tracking shot strongly suggests that what we're watching is real.

For Si Green, aka Bonobo, its the latest in a growing body of outstanding music videos. For Oscar Hudson its a rip-roaring start at his new production company home - he recently joined Pulse Films. And we just had to ask Oscar all about it. On-set photos by Christian Cargill

Promonews: How did you come up with the idea? And what’s the connection to Bonobo's music?

Oscar Hudson: I knew from the brief that the album centred around Si’s relationship to physical places and landscapes, with particular regard to the senses of alienation and detachment that he’d experienced during his extensive time touring. My idea was aimed trying to link psychological space and physical space directly through a kind of physical metaphor.

The idea was developed around the central physical concept of making a series of repeating rooms that shrink in scale around a central character. I got really excited about the prospect of trying to achieve this in-camera and seeing how extreme we take the idea.

There was a point where I thought we’d shoot the whole thing on lo-fi drain cameras (really narrow pipe-cameras that you push inside sewer pipes) and then also have the camera go inside people’s mouths and down into their bodies… but that was probably a bit too dark and would have taken things away from the physical reality of what’s actually possible. We opted to go for the slicker look and I’m glad we did.

Why is it Japanese?

The aesthetic arose after discovering the Japanese phenomenon of the Hikikomori - young people who find themselves overwhelmed by life and who end up as housebound recluses. This felt like the perfect match for what my concept was trying to do and so very early on became a core part of the narrative we were creating.

The Japanese aesthetic also worked really well on a number of practical levels. The low, minimalist furniture suited our low camera angle and was easier to reproduce & scale down on mass and the Japanese pollution masks helped to make our 10 actors appear like the same character.

Also the set is packed with all sorts of references to the song’s lyrics and to the album campaign itself. I won’t give these away, but people are starting to pick up on them in the YouTube comments which is fun.

"The aesthetic arose after discovering the Japanese phenomenon of the Hikikomori - young people who end up as housebound recluses" Oscar Hudson (above, left)

When did you realise it could work? Has anything like this been attempted before?

I always knew the idea would work in some form or another. But after the early tests we did I realised it was going to work really nicely in the quite slick form you see. The grip system we designed to move the camera is entirely original as far as I am aware. The camera move had such specific and unusual requirements that almost all the grips we spoke to weren’t that interested in the project because it fell beyond the realm of what’s possible with existing equipment. To me and Ruben [Woodin-Dechamps- the DOP, below] though that was kind of exciting - we really had to think outside the box and get out hands dirty and get experimental.

The set is made up of 18 rooms and was just under 100ft long. We basically rigged our little camera to a flat base plate of wood, covered the under side of this in downward-facing carpet and laid a very smooth lino to drag it across.

To keep it in a straight line and to hide the tow wire we cut a one millimetre-wide groove into the floor all the way down the middle of the set and had two nails coming out the base of our camera unit to keep it sliding in the groove. The wire was then attached to the front nail and the camera could then be mechanically wound in from underground whilst the wire could remain hidden.

I can say with great pride that there’s no post FX whatsoever. The whole film is comprised of just two shots: the move forwards and the move backwards. There’s one edit but it’s a simple match cut, nothing fancy. A lot of people seem to ask how the actor is able to appear in every room. The answer is that it’s not one actor, it’s 10 actors.

Ryan Staake on his Young Thug meta-masterpiece: "I'd nothing to lose"