Kevin Godley on remaking a classic for Elbow - with added Cumberbatch 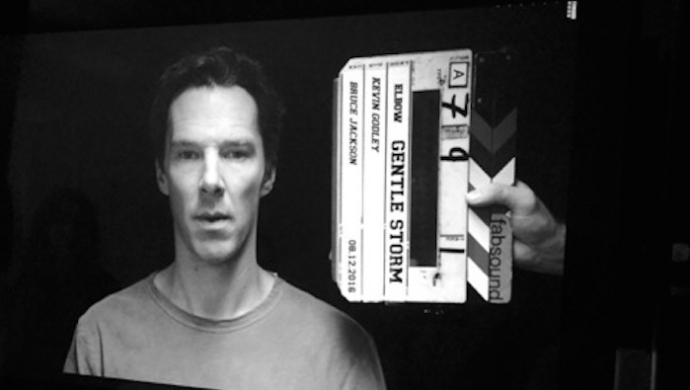 More than three decades after Godley & Creme made one of the defining music videos of the 1980s, Kevin Godley has done it all again. The same conceptual simplicity, with a sizeable cast of extras of all shapes, sizes and ages. Only this time, including Benedict Cumberbatch (above).

So we asked Kevin - what was it like remaking the amazing video for Cry for Elbow's new single Gentle Storm? Wasn't it a little bit strange? Was it much easier this time around to pull off, considering the huge leaps in technology? Did they move on from keeping the actors' heads straight with a saucepan?

KEVIN GODLEY:  Is it possible for a job to be easy and difficult at the same time? Yes, it is. When Guy Garvey called me and said: 'Would you consider recreating the Cry video for our new song Gentle Storm?' I was a bit puzzled. Why would he want something that was already out there?

Then I realised that ‘out there’ really meant 'out there since 1985', and a whole generation or three wouldn’t have seen the original, or have a clue who Godley & Creme were. So to a world of millennials it would probably be “who the fuck?”...

So why the fuck not?

It was a different song with a different tempo and feel, that’s why not. Where Cry loped, Gentle Storm clattered, where Cry relied on simple pop lyrics, Gentle Storm was full of poetic truths. So yes, everything was different yet somehow the same, and I could see how the film we conjured up all those years back might resonate with Guy.

So, after some thigh-slappingly funny phone conversations and texts, I said 'yes' and began casting. This time out, thank fuck, potential cast could video themselves miming the song and send us clips to prove how good or bad they were. Last time we sent everyone audio cassettes of the song and hoped they’d get it right on the day. Most didn’t.

One major bonus was finding out that Benedict Cumberbatch was up for appearing in it. Needless to say we didn’t ask for a video to check his miming.

Come the day of the shoot the studio was full of people waiting their turn like it was a doctor’s surgery, and second in line was Benedict on a strict one hour time slot. We’d never met before so I had no idea what to expect. Was he a snotty superstar with a million PAs in attendance? Nope! He was a lovely down-to-earth man, an enthusiastic music fan, and (luckily) an admirer of the original Cry video. We did two takes with him, both flawless, except for the stray ‘and’ towards the end of the song that tended to screw everyone up.

"Needless to say we didn’t ask Benedict for a video to check his miming."

After Benedict set the benchmark everyone who followed nailed it in two takes. That includes Craig, Mark and Pete of Elbow, who trained in from Manchester, Guy’s wife Rachael Stirling and brother Marcus, both accomplished actors. They were all extraordinary to work with and had that classic, no bullshit northern sense of humour that set the tone for the day.

I didn’t really have to direct anyone - they all became suitably themselves as soon as the camera rolled. Everything felt real, nothing felt forced and there were no fuck ups, no tantrums and no 35mm gates to check as we shot on 4K res digital video. In fact the only difference between this shoot and Cry was the major technological advance of steadying people’s heads with a sink-plunger instead of a saucepan.

"The only difference between this shoot and Cry was the major technological advance of steadying people’s heads with a sink-plunger instead of a saucepan."

A few days later I was editing in Ireland with Eoin McDonagh and Eugene McCrystal and finding my way around the differences in feel and tempo. Were transitions too slow, too fast, too many? How often do we feature Guy and the band, Benedict, Rachael, Marcus, me? Yes, me. At Guy’s request, I did a take too, and appear briefly on the stray ‘and.’

Our first cut was considered a little fast by all back in London, so we tried to slow it down a little. Tricky, as there were many editorial factors in play that suggested a pacier approach, so a lot of head scratching ensued...and then it was Christmas.

After hibernation we reconvened, refreshed and full of ideas on how to tweak the cut into line with band, management and label suggestions. We didn’t over analyse it, we just did it, submitted it and, after 24 hours of serious nailbiting we got a call saying we’d nailed it.

My thanks to Guy, Craig, Mark and Pete, Benedict, Lucy Nolan (my peerless producer at Smash) Bruce Jackson (DOP), video commissioner Emily Tedrake, the cast, the crew, the studio, editorial team Eoin & Eugene and the sink-plunger.