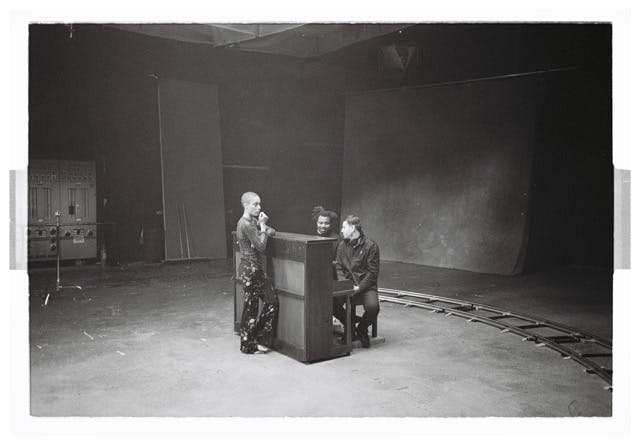 Photographer, filmmaker, label founder, music producer, and all-round creative powerhouse, Jamie-James Medina's long-time association with XL Recordings and it's subsidiary label Young Turks has resulted in him building a distinctive body of work as a music video director, for the likes of King Krule, Gil Scott-Heron and Iggy Pop. His latest collaboration is with the hugely talented and highly respected musician/producer Sampha Sisay on the video for (No One Knows Me) Like The Piano.

Heralding the release of Sampha's debut album Process earlier this month, the video - which comes in both 2D and 360°/VR versions – is a striking combination of intimacy, emotion and visual effects, as Sampha plays at the piano in a recording studio, accompanied by a girl (Adwoa Aboah) who appears to be crumbling away to dust. We spoke to the Jamie (above right, on set with Sampha and Adwoa) about the making of the video. On set pics (C) jamie-james medina

Promonews: How did the reflective and reminiscent nature of the song influence your treatment for the video?

Jamie-James Medina: Every visual idea should start with the music and I always tell young artists to be patient and let the music guide the visuals. But I first heard a demo of this song in February of 2015 - the version you hear in the VR experience. I’ve never spoken to Sampha about this, but there is a feeling of love and loss that runs through his lyrics and melodies and this song forced me to think about how those emotions evolve over time.

My father passed away when I was 18 and I often try to remember his voice. We have no recordings of him in conversation, no video - but would I still recognise his voice? That was the simple idea that I wanted to explore - how we hold onto memories - which led to this idea of disintegration.

It’s a very intimate piece – does that come from having a close relationship with the artist?

Actually, I’ve worked very closely with Young Turks and the many acts signed to Samph's label, but we’d only met in passing – at festivals, in the studio. With every shoot, the challenge is to create a relationship with the subject as quickly as possible and he was very trusting and open. Sampha is a brilliant collaborator.

And where did you create that intimate atmosphere?

This video took many months of work - in London, Amsterdam and NYC. I was covering the US election for The Observer up until the 1st of November, was in London on the 5th to start prepping the shoot at Duke Island Studios on the 7th and flew straight back to NYC on the 8th to cover election night and start editing with Final Cut on the 10th. That was all very stressful for me, but I wanted to create an atmosphere on set where Sampha and Adwoa Aboah, our lead, could find that intimacy. Just a very simple look and feel - an exposed studio, low light. Once we had that on film, I went back and forth to Amsterdam to work on the VFX with PostPanic, our creative partner, to bring this idea to life.

"With every shoot, the challenge is to create a relationship with the subject as quickly as possible and he was very trusting and open. Sampha is a brilliant collaborator."

It seems that increasingly moves from being around Sampha to being about the girl. How would you describe the role of Adwoa in the video?

The song is so intimately Sampha’s story, I wanted to define that upfront with his performance. And then we slowly introduce Adwoa, who represents all of the emotions and ideas that I heard in the music.

She seems to be aware that the clouds of floating particles coming off her seems to signify her demise – or is that me just projecting that as a viewer?

An emotion coming undone. A feeling, drifting away. A fading memory. They’re both holding onto these final moments together.

When did you decide to do a 360º version and what are you trying to achieve with that?

That came from Google and YouTube and from m ss ng p eces, our executive producer. They opened up that idea. We realized early on that the 2D version would focus on the intimacy of their relationship and unfold narratively and the VR version would be itself an intimate experience and put the viewer in the middle of that narrative.

Did you have a good idea how you wanted the VFX to work before you shot the video?

Yes and no. This was my first experience with heavy VFX and I think I had a good idea of how I wanted the dust to look and feel - we did a lot of concepting - but it took a while to get the movement of the dust right. Dust is lighter than sand and heavier than flour - we had these conversations for weeks. Her disintegration could never look aggressive or horror, so it took a few false starts to get that right, but I love that learning process and we got there in the end.