Douglas Bernardt on his epic video for Nego Bala's Sonho - "We wanted to deliver a sense of hope for the future." 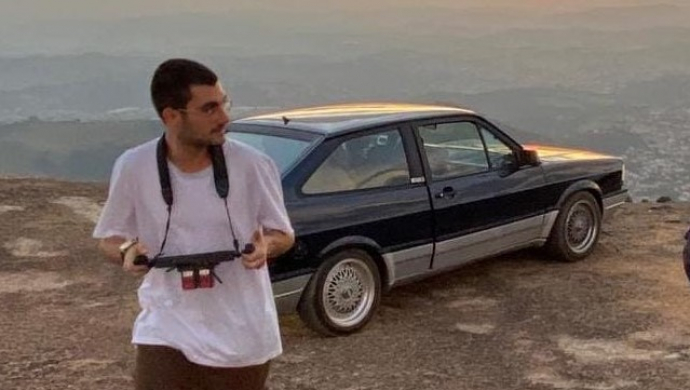 Douglas Bernardt's new 15 minute short film/music video Sonho tells the extraordinary story of Brazilian musician Nego Bala, who was incarcerated in a terrifying juvenile jail when he was just 12 - but survived, and managed to pull his life around.

Now Bala is a pop star with a message of hope, which Bernardt has brought to the screen with a level of skill and ambition that has become a hallmark of his work.

Starting in the jail - where the twelve year old boy starts to hum the melody that will become the song Sonho (or Dream), and is punished for it - the story advances through different chapters, and different forms of narrative, representing the artist's life: from the São Paulo favela, where the performance by his group of friends resembles a dance by an African tribe; to great portraiture of ordinary people; through to a surreal version of a friend's death - and finally Bala talking to his younger self, about his redemption.

The film was a produced by Stink Films in Brazil, in collaboration with AKQA\Coala.LAB - the same partnership responsible for Bernardt's short film Bluesman for Baco Exu do Blues - winner of the first Brazilian Grand Prix at Cannes Lion for Entertainment for Music in 2019. And the script for Sonho was devised using testimonials from Nego Bala, written in collaboration with Douglas alongside the AKQA\Coala.LAB team.

We spoke to Douglas Bernardt about the project - that was two pandemic-affected years in the making - and discovered that just like the film itself, the production process assumed epic proportions.

The story of the creation of the song was as strong as the track itself.

How did the project begin? Was it always the plan to make something bigger than a normal music video for Sonho?

The project began with an invitation from old time partners AKQA and Coala.Lab to create a film that would be part of the release of Nego’s first album, Da Boca Do Lixo.  As I got the track and started to write the script, we understood, talking to Nego Bala, that the story of the creation of the song was as strong as the track itself, and we could deliver a bigger message to the audience.

I’ve been trying to mix formats on my personal projects, so that was the perfect fit. A musical short film about the creation of a song. This is where we ended up.

How close was your collaboration with Nego on developing the story? What did he want to convey with the film?

Me and Nego always wanted to shoot something together. We never knew if it would be fiction, music video or a documentary, but the intention was always there, since the very first time we met four or five years ago.

But none of us ever imagined it would happen that way, with support, sponsors, PR, etc. It was a genuine willingness of collaboration and inspiration. Me on his words and him on my visuals.

He wanted to convey his story in a way the majority of the population would connect, not only in our industry bubble. A film in which people could see themselves and their potential of reaching their dreams. No matter how far they seem to be from his reality.

Where did you shoot the video – and how long did it take?

We shot all over São Paulo state. From nature, to urban downtown, to Favela do Moinho. It was all around the city where chaos and inequality of opportunities are translated by Nego’s body of work.

The film is comprised of different sections, or chapters. How would you describe the purpose of each chapter?

I thought about acts that together would poetically stitch the timeline of Nego’s trajectory. From an oppressed kid locked up in jail, who discovers in music a tool for freedom, to the projection of a new world of dreams and hope.

The location we chose used to be a prison for political dissidents.

Each section had one intention, and we had to find a way of navigating between them, keeping an unique and homogeneous look. There’s a few key visual and sound transitions in the film that were meticulously thought out, to drive the audience from one sense to another.

Like the hole in the jail that takes us to nature, or the candle scene where Nego projects himself saving the life of a friend. I'm not the biggest fan of how transitions are being used nowadays. They have been so overused without a reason. I try hard to keep them always as a tool within a narrative motivation.

The first section in the prison is brutal, but has its own beauty. How did you create that?

That was one of the toughest scene to conceive visually. The image the world has of Brazilian poverty and general jail scenarios are always inhumane and overly rough. I didn’t want to put kids into this stereotyped visual. But we also couldn’t be naive and not show the struggle that is being in prison.

To find this balance, together with Pierre Kerchove (DP) and Carol Ozzi (PD), we thought about an overall overhead soft light that would not create a dense atmosphere. We also painted all the location in the same blue color as the kid’s uniform. These two things together brought a sense of oppression in a visual that was meaningful and strong yet beautiful.

The location we chose used to be a prison for political dissidents, during the Brazilian dictatorship, and later on was also an actual juvenile correction center. A lot of people were physically and mentally tortured in there and the place has a strong oppressive energy itself.

It's also impossible to not mention our casting director Giovana Rouvier, who found all the boys that shaved their heads and lived this unique experience on set with us.

When the young Nego looks out of the prison, you cut between a tribal dance and Nego and his crew in the city in a similar formation. What’s the significance?

This scene was created with choreographer Gabb Cabo-Verde and involved a lot of research and conversation with specialists. We wanted to show that rhythm and music are practically engraved in our DNA.

Brazilian funk, the genre where Nego mostly draws from in this album, is seen with a lot of prejudice by conservative people in Brazil. So the scene has the intention of showing that Brazilian funk actually has cultural heritage that comes from the deep roots of Brazilian ancestry.

Hand beats have been used as a musical door for transcendence since a long time ago, and it was brought here during the African diaspora, by enslaved people. The same applies for the circular formation, that is seen in so much cultural manifestations in Brazil that has strong African roots: from samba, to candomblé and capoeira. They all have circular rituals, in which energy flows from one individual to another.

After the realism of the car journey, there is a series of almost classic portraits. Who are the people or characters portrayed in this section?

Those scenes were based on the interviews we did in the casting sessions and tapes. The same simple question was made to everyone: “What's your biggest dream?”, and we heard stuff that showed the effects of inequality of opportunity and structural racism.

"Making a beautiful birthday party to my daughter" ,"Walking in the streets with my dog without being chased by cops" - and so on.

It leads to the part where Nego interrupts a death. How did you achieve this dreamlike scene? Was there personal significance in this scene for Nego?

- “And what if you could dream about changing the past?”
- “I would save my friend Bebezão from being murdered.”

This question came up in one of the many meetings I had with Nego while conceptualizing and writing the script. This scene was entirely based on his answer.

Nego wanted to convey his story in a way the majority of the population would connect.

We wanted to deliver a sense of hope for the future. Of a new world, where people are not killed by the colour of their skin, by the clothes they wear, by the hood they live in. Where newborns will have the freedom of dreaming, of being who they are without prejudice and fear.

The technical achievement was pretty complex. It was a mix of in-camera and post-production VFX. We had to compose both shots of Nego holding the candle and the drone in the alley. The rain and the bullet were 3D. And the actor that plays Nego’s friend was sitting on a rig hidden inside his outfit.

You end on a message of Hope. It's directed by Nego to his younger self, but how much is that also directed towards the people of Brazil?

The idea was connecting past and present to deliver a message of hope for the future. Nego wrote the monologue, but everything changed when we were shooting the scene. The emotion was so real and Nego just improvised what came out from his heart.

I think it’s directed not only to the people of Brazil, but the whole world. The penitentiary system is questionable everywhere. It shatters the perspective of the future for so many people, even more for kids.

What were the biggest challenges in making the film?

Putting it all together in the middle of the pandemic. We had many setbacks because of the lockdowns. We shot most of the film in mid-2021 when Brazil was really bad in case numbers, and following very strict health protocols. On many occasions I thought the project would never be finished.

It was a challenge to deal with time, ambition and expectations.

And what were the biggest highlights of the experience of making the film?

Being part of something that I really believe in. Filmmaking is a powerful tool of communication. And it is very fulfilling when you put out work that really tells something to the world.

I feel like we are living a “release-driven” generation, where the amount of work/awards are more important than the content of the pieces in itself. This project took more than two years to be made, and it was a challenge for me to deal with time, ambition and expectations.

In the end I learnt that what really matters is being honest to the story you are portraying, and translating truth through your visuals and storytelling.

• Douglas Bernardt is with Stink Films for global representation.

'Sorry it’s not disco, we lied. It’s an album of terrible lows and even worse highs’ - say …

Continuing seamlessly from the slick, nightclub aesthetic of Take My Breath, The Weeknd and …