Charles Mehling on directing The Rolling Stones' Living In The Heart Of Love. "Things became more raunchy and rebellious." 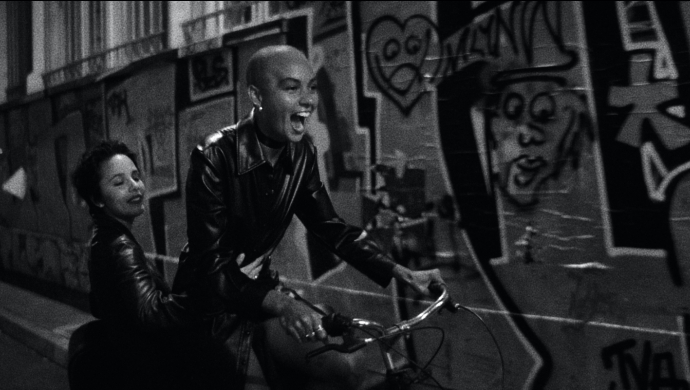 Charles Mehling - director, photographer, and former bass guitarist of The Brian Jonestown Massacre, a rock band with a famous Rolling Stone referenced in their name - has now, finally, made his first video for The Rolling Stones themselves.

It's also the first to be released since the death of the band's drummer Charlie Watts last month, and it's something of a tribute to the great musician who contributed so much to The Stones' unique sound and music.

The video for Living In The Heart Of Love - a song from the 40th anniversary rerelease of The Stones' 1981 album Tattoo You - is a wild, breathless thrill-ride through Paris - a city which has always been one of the band's spiritual homes - in the company of two female lovers.

The pair - played by real life couple Nailia Harzoune and Marguerite Thiam Donnadieu - lead a louche, timelessly rock 'n roll lifestyle, partying at various swish locations in Paris with their eclectic mix of friends. The story is rendered in Mehling's signature black and white look - which also allows the smooth incorporation of vintage video footage of The Stones performing in the Tattoo You era - focussing strongly on Watts behind his drumkit.

We spoke to Charles Mehling, to find out more about the project and discover how the song took him back to his youth, the challenges of shooting in Paris in August in a Covid-affected year - and the impact of the death of Charlie Watts during the making of the video.

I wanted it to be a love story that felt modern and of the moment.

P: Were you familiar with the Stones album Tattoo You?

CM: Tattoo You came out at an exciting intersection of musical relevancy for me. I was in seventh grade and listening to the typical Van Halen, AC/DC stuff that was popular at the time. Then by chance I saw the punk rock documentary The Decline of Western Civilization - and that was it for me. The next day I shaved my head, bought a Germs T-shirt and swore to forever hate any music good enough to be played on the radio.

Six months later me and my crew, adorned in bondage pants and safety pins, went down to the high school dance to harass the jocks and surfers for being, well, lame. Although we stood outside in the parking lot, definitely not taking part in the coed fun, the PA inside was booming! They were dancing to all crap hits by  REO Speedwagon, Billy Joel, etc. Then all of the sudden the opening riff of Start Me Up [the hit single from Tattoo You] came blaring out, like a sloppy musical revelation. I can still remember what a great sound I heard coming out of those speakers that night.

The brief was coming from one of the most relevant musical influences in my life.

What was your take on Living In The Heart Of Love?

When I first heard Living In The Heart Of Love I hadn’t realised it was a re-issued track. I guess I didn't read the whole brief from the record company! I hadn’t heard much of their recent music, so I thought: 'Hmm, this is kinda cool'.

The thing that struck me first was the scrappy high-pitched backup vocals from Keith that I hadn't heard for some time. That and the sort of disco-era bouncy four-on-the-floor bass lines that could only be Bill Wyman.

Did you have any previous Stones connections before writing on the track? And was there anything specific in the brief that appealed to you?

Well, I was in a band called The Brian Jonestown Massacre - Brian Jones was a member of the Stones - and I shot Mick's daughter Georgia May for a Rimmel commercial, and one time Keith Richards hugged me by accident! But no, no meaningful connection, I guess. The most specific thing that attracted me to the brief was that it was from one of the most relevant musical influences in my life.

There’s a dark, sexy swagger to Paris you won't find any other place.

What was the key aspect of your treatment for the song that you think appealed to the Stones?

The fact that they didn't have to be in the video was a big plus for sure. When my agent Alexa Haywood passed me the brief I happened to be in Paris, so with her help we conjured up a kind of romantic Before Sunrise romcom narrative. We wanted to do something like a modern Godard sort of story, and that’s how it was written. As things developed it became a bit more raunchy and rebellious - and more like a music video I guess.

And there’s something about Paris and the Stones that makes sense. I don’t know why, but it just does. There was the whole Exile On Main Street tax avoidance thing, and the fact that they recorded a lot of the tracks from Tattoo You in Paris, but there is also something deeper. Mick and Keith get the Vive Le Rock spirit fully. And maybe it’s because the French love the Stones. I lived in Paris for a while, and there is a dark, sexy swagger to that city you won't find any place, other than maybe New Orleans. Paris is definitely Stones over Beatles town.

Did you always want a female couple as your leads?

I wanted it to be a love story that felt modern and of the moment, whether that meant gender or sexually or culturally diverse.

It's funny we featured a gay couple in a Rolling Stones video, and it's never really be mentioned in any press, nor was it ever an issue raised by the band or record company. That's the point, I guess. Same-sex relationships are becoming 'normalized', thank goodness.

Nailia and Marguerite... a real couple who were actually actors and actually attracted to each other.

How did you come to cast your couple - Nailia Harzoune and Marguerite Thiam Donnadieu - in the lead roles?

Not kidding, this video almost killed me and my producer Alexa. Paris in August is dead they say, but that is an understatement. Not only are there no tourists during Covid but there are no Parisians within a two hundred mile radius - at least any that have anything to do with film.

Thank god we came across Marieke Tricoire from Womanray, a high-end Paris-based production company, who just happened to be unlucky enough not to be on holiday. Once she was committed, she really called in all her favours and pulled it off somehow. But it was a real nail-biter. We utilized the Rolling Stones reputation and vast Rolodex to procure A-list talent - I wish I could share the names of the almost-booked that bailed on us last minute, one by one, till two days before the shoot!

Then by some divine intervention - and local casting agent Lucie Tartenson - Nailia and Marguerite magically appeared. It became quickly apparent that they were the perfect choice. A real couple who were actually actors and were actually attracted to each other.

Iconic locations that normally would be off-limits were accommodating.

How long did you have to shoot the video? And what were the biggest challenges in bringing your story to life in the city?

We had exactly 1.5 days - or actually nights. Again it was Paris in August and that was a plus and a minus. There was no crew and there was no cast - but there were plenty of locations happy to have us.

Iconic locations that normally would be off-limits were more than accommodating. Hotel Amore and the Petit Palace disco were down for this event. Even the usually bustling streets of Paris were viable backdrops.

What was the most enjoyable part of the shoot - and the trickiest?

The most enjoyable part of the shoot was the crew and the cast, and the fine wine. The trickiest was everything else. I so wanted to make this video, and the weight of not being able to organize it after being awarded the job was unnerving. Semera Khan, the video commissioner from Polydor, was super supportive and totally stuck with us, which was a blessing.

Mick and Keith saw the cut, and their comments were mostly 'add more Charlie'.

How did Charlie Watts's death impact upon the production – and/or the post-production - of the Living In The Heart Of Love video?

Well, I don't want to be overly dramatic, but as mentioned above, the pre-production was super stressful. We just felt plagued by bad luck, one thing after another. The shoot was super fun, and the footage looked liked it was fun, and I was excited about the editing. It was so strange as I was so deep in this project; I was such a massive fan of everything Charlie Watts was, that his passing was potent. I knew like everyone did that Charlie had some health issues, and he wouldn't be touring; I was floored when I heard the news.

Luckily for the video, I had edited a bunch of footage from Tattoo You-era videos, then shot some kid watch them off a laptop at the party scene. That footage was intended to pepper into the storyline, but considering the gravity of the moment, I decided to double down on it.

A magical and sad project that I was really so honoured to be a part of.

When I presented my first edit, I didn't know what to expect. Obviously, much more relevant things were swirling around. I was so thrilled to find that both Mick and Keith saw it and had comments, mostly "add more Charlie".

But the 'Charlie Is My Darling' line that appears at the end [a reference to the 1966 Rolling Stones documentary, directed by Peter Whitehead] came as a request from Mick. It was a magical and sad project that I was really so honoured to be a part of.