Behind The Video: Ben Strebel on Skrillex's Butterflies - "The ghosts are CG, the dancing is real." 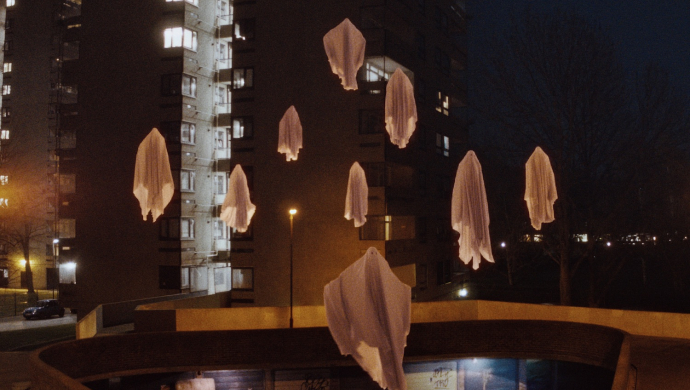 Promonews talks to Biscuit Filmworks' director Ben Strebel about the combination of passion, ingenuity and trust that went into making his remarkable video for Skrillex, Four Tet and Starrah's Butterflies.

In Strebel's video for the track from Skrillex's long-awaited new album, as a group of teenagers burst out of their high-rise lockdown confinement, the pent-up frustrations of the past 18 months are expressed through dance, and dressing up as ghosts. But then things take step towards the transcendent - the ghosts fly, and their dance takes to the air.

We spoke to Ben Strebel about the making of his tour de force, and the working partnerships that were crucial to its success, from choreographer Holly Blakey, to the VFX team at Electric Theatre Collective, to the artist himself, Sonny John Moore - aka Skrillex. He reveals that this ground-breaking project really was a step into the unknown, which eventually became a joyful experience in itself.

Promonews: How did the process begin for making the Butterflies video?

Ben Strebel: Sonny texted me few a years ago buzzing about his forthcoming album, which ended up being multiple years in the making. We were about to shoot a video for a different track when Covid hit and our shoot - which was supposed to shoot in Thailand - couldn’t go ahead.

Another few months passed, during which we talked regularly on Facetime. In this time he sent me four more tracks to choose from, of which I decided to go for Butterflies. I mean, Skrillex and Fourtet = Banger.

I felt for that generation of kids who had been robbed of a year.

Is the subject matter at the core of the video – the stress of young people cooped up during the lockdown – something that’s close to your heart?

The track is all about love and closeness between people, which resonated with me in the pandemic. I couldn’t help but feel for that generation of kids who had been robbed of a year with very little support.

So I wanted to spin in a positive way and celebrate what it would feel like when those restrictions were lifted and people could be together again. It’s about freedom and expression.

Sonny [Skrillex] stressed the importance of it being positive.

What discussions did you have with Skrillex about the idea and how to approach the subject?

When I presented the idea to Sonny, he connected with it and stressed the importance of it needing to be positive. It’s a point of view we both shared.

He was excited at the prospect of reinterpreting the metaphor of the Ghost - from something about loss and disconnection, to hopefulness and liberty that thrives in the imagination. In this instance the ghosts represent the feeling of being released from Earthly restraints.

We realised that the ghosts had to go up...

When did you know you wanted it to be a dance piece - and that it would cross over from featuring the real dancers to virtual ones?

The track begs for movement, which to me was apparent from the outset. I’m interested in how physicality can convey the repression we feel and build to that sense of freedom. I realised there was a limit to how far we could push that feeling of euphoria and release with grounded dance.

This is where the supernatural comes into play. The ghosts are CG - but the dancing is real. We recorded their every movement using Mocap, and then manipulated the Y-axis to further effect. We realised they had to go up.

It’s about escape and release and there’s no better way to convey that than through an upward trajectory. Reaching the skies.

[The dancers] have had next to no opportunity to express themselves for so long.

How did the main members of the cast bring their own experiences to the video?

I started the process of casting by doing a series of interviews with the dancers. In order to make the film as genuine as possible I wanted to gauge their experiences of the past year, and draw on this in the narrative. It was important to me that these kids’ stories and feelings were captured in this film.

As I got to know them and understood their struggles and desires, it became apparent that not only was this as much their film, but an actual vehicle for them to express themselves. They’ve had next to no opportunity to do so for so long.

Holly Blakey's choreography became instrumental in bridging from the real to the virtual.

When did choreographer Holly Blakey become involved and what did she bring to the project?

Holly’s amazing. I love her style, which is pared-back at times - less is more, in my opinion. I’ve always wanted to work with her and love working with choreographers from the start. She totally understood the emotion of the piece and became instrumental in helping us bridge from the real to the virtual.

How did you develop the ghost VFX with ETC? The realism of the sheets is amazing – something they had in their armoury already or needed to develop for the project?

ETC smashed it. Having worked with them on most if not all of my films, we’ve developed a shorthand and level of trust with each other. I couldn’t have made this film without that. They were so instrumental and pushed themselves so hard to create a piece of CG magic.

The passion and energy that they brought to this one is both humbling and amazing. I feel like they carried me through this with their creativity and expertise.

They’re never shy of doing impossible. The development of the ghosts and cloth was an evolving conversation, which took place over months. In the end they decided the best approach would be to do it all in CG rather than painting feet and hands.

This way we could instil character and personality into the movement of the cloth, which I believe in a shot such as the falling cloth at the start gives it an energy and personality, which is what this film is all about.

Any time you see cloth moving in the film - when it’s not attached to a real cast member - has been created from scratch by ETC. Masters of cloth and lighting and everything else.

Any time you see cloth moving... it's been created from scratch by ETC.

What were the main challenges of the shoot itself? And the biggest challenges - and surprises - that came out of the post production process?

We cut the entire final sequence without knowing how the ghosts would react to the Y-axis movement of the ghosts. Seeing it evolve was incredible.

It was brilliant to see how what once was choreographed according to gravity could suddenly be taken into another realm where physics is defied.

Sonny's trust and belief in the process were humbling - a joyful collaboration.

How close is the final work to your vision for the video? And what was the artists’ response to seeing it?

Sonny cried. Literally tears of joy. His trust and belief in the process were humbling. Such a joyful collaboration when working directly with such a intelligent individual.

I always wanted this piece to feel raw and honest. It’s a sensitive subject that had to be addressed in a sensitive way by all of us. I think we achieved it.

• Ben Strebel is represented by Biscuit Filmworks in the UK and US. Contact Andrew Law, Biscuit UK's Head of Music + Projects, about new projects.

Shan Phearon's appreciation of the power of popular cinema has influenced his music video work for the likes of One Acen. and Ocean Wisdom. Now he has fused one of the most popular film genres with …