Behind The Video: AB/CD/CD, Ailsa Tapping and Sasha Nixon on Sigrid's Sucker Punch 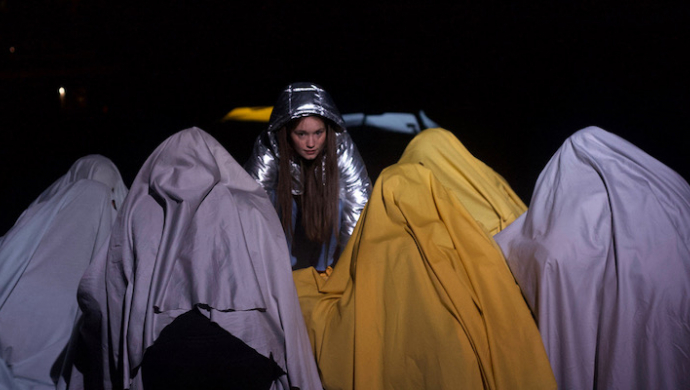 How do you handle the force of nature that is Sigrid? Davo McConville asks the people behind the video for her latest banger, Sucker Punch, filmed over two very busy days in various South London locations in September.

With endless invention, ambition and Gallic refusal to accept ‘no’ for an answer, AB/CD/CD (Clément Dozier and Camille Dauteuille) create music videos that layer dizzying combinations of practical effects and setups with graphics, animation and camera movements, and add value beyond the number on the budget.

A perfect match, then, for 22 year old Norwegian singer Sigrid. The video for Sucker Punch brings as much moxie and confidence to bear as does Sigrid herself, her upfront self-possession evident from her to-camera opening shot. Sucker Punch sees AB/CD/CD flexing their match-cut skills, choreographing dancing with timed pyro, and sudden light-switch changes from day to night.

Amidst wrapped-up sports cars hinting at the swag beneath, hordes of dancing ghosts and a marching band in pursuit, Sigrid’s swagger is undiminished. She rules her world, stomping on a pile of dead computers, a piano and a sportswear in succession. And then near the end, the world transforms into an animated wonderland for good measure. The video is a 3.28 jolt that leaves you spinning.

We spoke with Camille and Clément, and producer Ailsa Vanessa Tapping and Forever EP Sasha Nixon, to find out more about working with the youth of 2018, stopping time, and causing trouble as teenage stoners.

Were there any images the track instantly put in your head?

AB/CD/CD: For us there was something quite obvious. The track and the idea of a sucker punch itself is quite visual already. And then the intensity of the track…

Sigrid’s interaction with the camera is very strong.

AB/CD/CD: Yeah, there was no precise image, but her, an environment and the idea that it changes instantly.

Were there any technical puzzles to solve for the video?

This one was more of a logistics puzzle. When you need a shot to start at daytime and jump into night time instantly, there’s nothing you can ask the sun to help you unfortunately!

We were so pressed for time that we had to improvise a choreography [on the explosion scene] with the pyro, and the camera moves. It was so impressive on set, and sort of dangerous with the handheld camera. LOTS of adrenaline there…

Sasha Nixon: The fireworks setup took longest. We only had about 7 goes to get it right before the budget was ‘exploded’ - lol. So no rehearsing, just going for it each time.

Ailsa Tapping: There was, however, a pretty funny language barrier when discussing explosions for this one though!

How would you describe your working relationship with ABCDCD?

Ailsa: A whirlwind! This video was turned around in record time, with constantly altering creatives to take into account. The guys are really precise and clear with what they want, so it was just a matter of racing against the clock to lock everything in place.

Did you learn anything on this video?

AB/CD/CD: That we can shoot everything with a 12mm lens and IT LOOKS PRETTY GREAT ACTUALLY.

Rob Witt (above left) did an amazing job, taking time to understand exactly what we wanted to achieve. And he brings his great 12mm lens…

Do you enjoy shooting in London?

Yes, the locations look great, and we love the atmosphere as much as we love English cinema. It’s very inspiring. And London is the centre of the music business and it’s still very strong creatively.

Was there a particular reference for the animated sections near the end of the video?

We wanted to mix styles here and show Sigrid in many different ways. We hope that it’s a section the fans can relate to. It gives a bit more intimacy with Sigrid and is playful with her character. But you know, we’re coming from graphic design and post production so animation feels really natural to us.

Sigrid’s first single came out when she was 17. What were you doing at 17?

Camille (ABCDCD): Drinking beers and smoking pot while listening to metal and watching MTV basically. It’s funny you ask that because we had the exact same thoughts while working with Sigrid seeing how professional she is comparing to us back in those days!

Clement (ABCDCD): I was studying maths in the countryside, trying to save money to go to the US while playing with my DV camera. Looking back at it, it feels really far from anything! :)

And did you enjoy collaborating with someone so young?

AB/CD/CD: We like shooting with young people and even kids, they’re really fun and genuine when they feel safe. But with Sigrid it was obviously something else. I don’t know what part her age is playing in that, but she was focused and enthusiastic where others are blasé and tired I'd say.

I think it might be hard to tell as an outsider, but there are lots of little Easter eggs hidden in tribute to Norway - can you tell us more?

Sigrid asked us from the start bring some Norwegian touches into the film. For us Norway is first and foremost known as black metal country (but I guess it doesn’t fit with her, haha). She had lot of good ideas but it wasn’t always easy to accommodate them actually, as they were mainly related to architecture, landscape or “Bunard” (Norwegian traditional costume), it wasn’t really possible in London and in our scenarios.

Then she came up with her favourite taco brand from Norway which has some cool packaging. She loves tacos, so we decided to play with that. Why not building a wall of Norwegian tacos ? Then she agreed to jump through it. Great! Hopefully we’ll be able to taste some of them soon ;)

How big a problem was the taco boxes continually falling down?

Ailsa: It was a edge of your seat, nail biting moment! We were really up against it with our schedule, and had decided to shoot this last as there was a fear that it was simply not going to work! The taco tower had been set up and was sitting there for a good 30 minutes without any issues, and then the moment we went to shoot it - they all fell down (I think it was due to the string and sellotape contraption getting too hot under the lights!) So we had to manically set it up again before shooting it. Second time lucky!

What do you love about the mad, mad world of music videos, as a producer?

Ailsa: Bear with me because this sounds corny, but it's totally true. There's something about the intensity of pulling together logistics that makes you feel so fulfilled. And the people who share that journey with you often become lifetime collaborators. I start pre-production having never met some of the crew before, and we leave as great friends. It's amazing what a combination of creativity and stress manufactures.

Rob Witt is a phenomenal DOP, well-versed in big budget music videos – how did you tempt him over from Los Angeles?

AB/CD/CD: Rob is a good friend actually, he was hanging around in Paris for a wedding, so we just hooked him on his way back to L.A. He did an amazing job on this film, taking time to understand exactly what we wanted to achieve, and how he could do the all we planned with the little time we had. And he brings his great 12mm lens…

Ailsa: We also had the incredible Emma Rose Mead designing this for us, which made it even funnier as she and Rob are neighbours in LA!

Budgets can be tough on a production. What would you have done with £100k more?

AB/CD/CD: Off to the Caribbean!? Haha. No I guess it’s hard to say, we really enjoy the film as it is now. I mean the budget constraints are a part of the process and it all leads creativity somehow. And thinking about it, it’s actually less about money than time. More time would have been good to go further into each scene and element. And more time with her would have been great as well.

• AB/CD/CD are represented in the UK by Forever, and in France by LaPac.