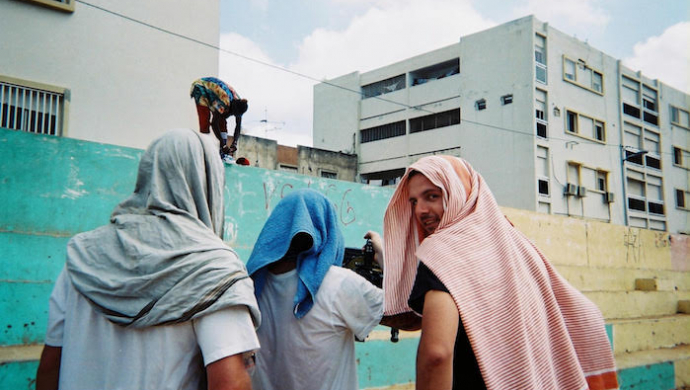 We talked to Adriaan about the experience of going hard and fast across Nigeria, Ghana, Senegal and South Africa - his own home country – to create this vibrant, culturally significant body of work.

We wanted to capture each city in its most real, raw and beautiful form (Adriaan Louw)

Promonews: What is the background to the project? How did it come about?

Adriaan Louw: When I was living in South Africa last year, Major Lazer approached me to direct a music video for Particula. That film, much to my gratitude, was really well received and following their collaboration with some awesome African artists this year, they asked me to shoot all four music videos for the EP.

Was the idea of shooting in four different countries part of the brief, or did you come up with that idea?

Major Lazer placed a lot of trust in us. I actually picked the countries, but I made sure that they were relevant to each artist’s origin, which also happened to be places that I’m fascinated by from a youth culture perspective. Their brief was to showcase the unique dance culture in each country.

Working with Major Lazer, we both have a mutual understanding and desire to capture each city in its most real, raw and beautiful form. Perhaps having grown up amongst these incredible landscapes and cultures in South Africa contributes to that. It was important to both of us that we made sure we collaborated with dancers, stylists, artists in each city to make sure that each film was as authentic as possible. We wanted to make films that people from South Africa, Nigeria, Senegal and Ghana could be proud of and that they truly felt represented them.

Four different videos in four different African countries sounds like a massive logistical challenge. How long did you have to make the four videos? Did you work on them one at a time, or were you essentially working on them all simultaneously?

We had a really small team to make sure that we were in a flexible position to tackle any hurdles that presented themselves along the way. We definitely took more of a documentary approach with small camera setups: mirrorless DSLR and a Bolex 16mm camera.

Each city has its own set of rules and pace that it operates at. It was important to bear this in mind (Adrian Louw, above)

We planned all of the films simultaneously. The awesome producer, that is Allison Swank, and I have been working together, travelling throughout Africa for a few years now. Each city has its own set of rules and pace that it operates at. It was important to bear this in mind and be accommodating of it, otherwise you just end up losing time and not planning for the how long it takes to make things happen. Allison was amazing when producing these videos and the filming of each ran just as smoothly as we could have hoped for. Our process was to keep shooting each film one after the other and send footage to the editor as we went along, so yes, they were all worked on simultaneously.

What order did you shoot them in? And how long did you have to shoot each one?

We first shot in Durban. Then Lagos, followed by Accra and then finally Senegal. We only had three days in each city so it was pretty full on. We would land in one city and immediately jump into the shoot. It was actually an awesome way to work, I really enjoyed it.

When you’re shooting different formats, and accumulating so much footage, as you’ve presumably done with the Major Lazer videos, do you do all the shooting yourself?

I worked with a friend and amazing up-and-coming DP called Thomas Revington. He’s super flexible when shooting under these conditions and we came up with a lot of setups on the go, which included one where we strapped him down to a quad bike that raced after guys on motorbikes.

We shot some 16mm footage too. I shot a lot of the 16mm, Thomas shot some of it too. It was a great camera B option and added an extra layer to each city which I really love.

Trying to film in interesting places whilst being respectful towards the locals of that area was important to us. I think this is always important when shooting in a country or city that is not yours.

What about the casting - who are the dance groups that are featured in each video?

We worked with choreographers and dance groups from each city, having already initiated discussions with them surrounding the project beforehand. They sent us videos over Whatsapp and we could review their progress before we arrived to shoot, but for the most part we let them do their thing. They included trending dances that were unique to each country.

You can see a short docu by Roberto Colombo about each country on the Major Lazer YouTube that goes with each video. There the dancers and choreographers tell us about the inspiration behind each dance.

Why did you shoot your South African video, for Balance Pon it, in Durban rather than Jo’burg?

In South Africa there is a big movement in dance music and the biggest one right now is the genre ‘Gqom’. Gqom comes from Kwaito music. South Africa is a prime example of how a genre of dance music can move a whole country. It’s incredible.

The song, “Balance Pon It”, is inspired by Gqom and also features the queen of Gqom music Babes Wodumo. Durban is the birthplace of Gqom music. It’s also a part of South Africa that is super rich in culture but internationally does not get the screen time that Johannesburg or Cape Town gets. I really love that city and it only felt right to shoot the video in a place which birthed a genre that completely inspired the track.

A few moments spring to mind immediately. In Dakar we took a boat out into the ocean before sunrise and jumped into the ocean with a surfer to shoot some of the sunrise shots. Swimming and directing at the same time was a pretty cool experience. Paddling out into the waves to shoot the surfers surfing at sunset was also an amazing experience to have in a place like Dakar.

We went to some local hangouts in Durban where we were in the midst of some really interesting parties and met some awesome people. Some nights we would go out and just take the camera with us with no plan. That was the benefit of shooting on a small mirrorless SLR, we could always have the camera on us and document any moments that spontaneously presented themselves. E.g. the night scenes featuring the dancers in the Lagos film.

I loved shooting the bikers in Accra in the parking lot at sunset and having big crowds gather around us, losing their minds - it was pretty special. We rocked up there and they just went nuts. We couldn’t even direct the bikers, it was so loud. We just documented it all.

Out of the four, do you have a favourite?

There are elements in every video that I absolutely love. But overall, I would say I enjoyed the energy from the video in Accra, “Tied Up” ft. Raye & Mr Eazi most.

What were the biggest challenges?

In Lagos we got locked up in a building, we were demanded extra money by the security of the building we shot Burna Boy on the rooftop of [on the shoot for All My Life]. We ended up getting out and running with all our gear. Jumped in a van and rushed out of there.

The heat factor also gets you when you’re out in the sun all day. And getting permission to shoot in certain areas can be really hard. Trying to film in interesting places whilst being respectful towards the locals of that area was important to us. I think this is always important when shooting in a country or city that is not yours.

Finally, congratulations on being nominated for Best New Director at the UK Music Video Awards this year!

Thank you - and to my FAMILIA family who submitted my entry for the award. I signed with them at the beginning of the year and am looking forward to making more magic with them in the future.

All My Life (feat. Burna Boy)

KC Locke directs another cracker for AJ Tracey, capturing his superstar lifestyle in a …