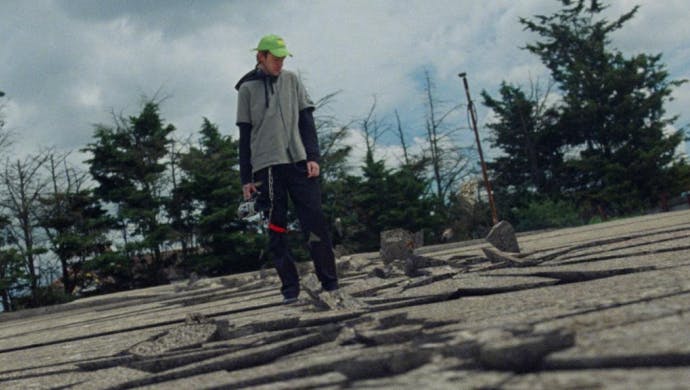 Prosper Unger-Hamilton turns alt-J's trip to the skatepark into an acid-fuelled fever dream for U&ME, the first release from the band's long-awaited fourth album.Inspired by '90s skate videos, Unger-Hamilton - brother of bandmember Gus - incorporates inspired use of visual effects into his lo-fi footage filmed at Romford skatepark, riffing on the classic paranoia of the stoned skater, both before and after a horrible faceplanting smash by singer Joe Newman.With gigantic bowls, towering ramps, incoming twisters and crumbling asphalt, Unger-Hamilton visualises some unspoken skater-fears in a mesmeric, dreamlike style reminiscent of early DANIELS and BRTHR videos.And as well as achieving that rarity of having alt-J themselves appearing in their own video, he even gets a murmur of lipsync in there too, from the facially-injured Newman.

Rolling into 2021 with TikTok celeb Doggface, Courtney Phillips directs a dazzling promo for David Guetta & MORTEN's version of the Fleetwood Mac classic Dreams.The skateboarding, Mexico-based viral sensation is shown skating down an endless desert highway, gaining fans and followers on his way. He passes journalists, fellow skaters and curious kids - becoming a sort of skate version of Forrest Gump - before transcending his physical limits and floating into the air and off to sea. In a perfect storm of virality and a pitch-perfect concept, the promo is engaging from the first frame, and it's one with infinite replay value. Whilst many similar videos live and die in the short window of their celebrity star's internet fame, Phillips' ability to intertwine the current zeitgeist and an offbeat concept means that this will continue to gain momentum well into the future.

Swim Club direct a mellow, mostly monochromatic video for Tussilago's Flirtation Forever, exploring the weightless and euphoric feeling of skateboarding, and drawing parallels to being in love.Focussing on two characters, Daniel Vargas and Jennifer Charlene, the visual unfolds in a series of gritty, mixed-media vignettes, shot in a loose and free fashion.Smooth steadicam shots and extreme low angles build upon the themes of adventure and transcending the usual limits of your body, perfectly matched by the ethereal track.

Luc Janin returns to music videos with an involving story of love and skating, for the unmistakeable Ash &ndash; featuring a very special skater.Clément Zannini plays the young man who escapes his pregnant girlfriend's anger on his board one night, leading him to flashback to the early days of their relationship, and reflect upon his new responsibilities - all the while executing excellent skate moves.And halfway through we discover that he has overcome considerable obstacle himself to skate at all...