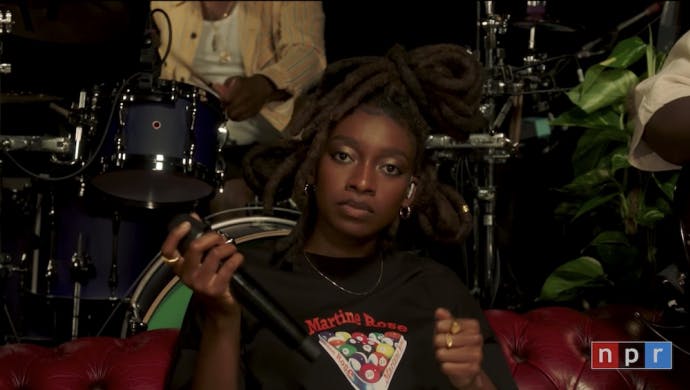 On the release of her new album Sometimes I Might Be Introvert, Little Simz performs a 'home' version of standout single Woman for NPR's prestigious Tiny Desk live music series - directed by Jeremy Cole.The 20 minute live session for Tiny Desk features performances of four tracks: Introvert, I Love You I Hate You, Point and Kill - featuring guest vocalist Obongjayar - and Woman. 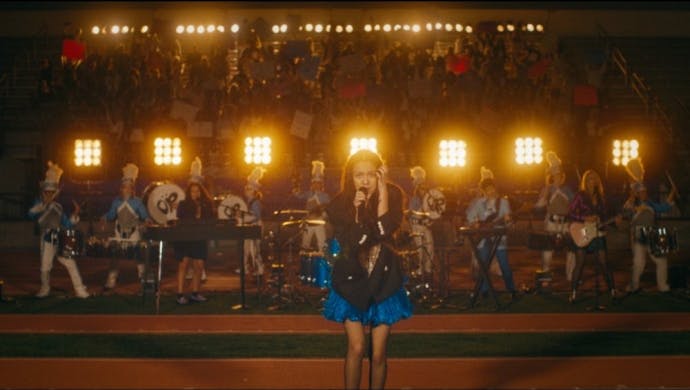 Sour Prom is a 30 minute concert film starring 2021’s biggest breakthrough artist, Olivia Rodrigo, co-directed by Kimberly Stuckwisch and Toby L.Featuring her debut, full length live performance, across seven songs, the film follows Rodrigo through an emotive and hyperreal journey to and through a prom, encountering anxieties and shady characters along the way, before finding euphoria and redemption for a climactic close on the football field.This alternative take on prom ultimately provides the conclusive notion that all that matters is not finding the dream date, but celebrating the spirit of friendship and inclusivity. 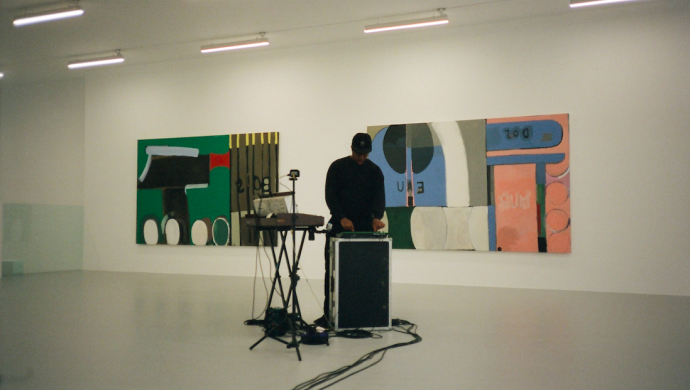 In celebration of the exhibition Allez La France! at Saatchi Yates, the London gallery and exhibiting artists collaborated with British jazz drummer and 2020 Mercury Prize nominee Moses Boyd on a unique composition made in response to the works in the exhibition - performed by Boyd, and captured by French filmmaker François Larpin.Boyd's piece was inspired by the work of Hams Klemens, Jin Angdoo, Kevin Pinsembert and Mathieu Julien - who make up the French collective also known by their contemporaries as “Moderne Jazz”. They began their work between Marseille and Paris, painting on walls and under tunnels, creating large abstract works that existed exclusively within public spaces. This is the first time that the French collective have been shown together, within a gallery space.Moses Boyd is popularly known for blending multiple genres into jazz to create various new sub-genres, and has described his own music as "an extension of black music, the diaspora" which draws influence from afrobeats, soca, reggae, drum and bass and jungle music. This performance acts as an introduction to a forthcoming film about the intersection between art and jazz, centered around the four artists showing at the Allez La France exhibition - also directed by François Larpin.

videoShame 'Live In The Flesh (Molten Jets)' by Ja Humby

Following the recent Live In The Lift for Franc Moody, Ja Humby's latest in his Molten Jets series is this one-of-a-kind doc and performance film for Shame. Live In The Flesh is another example of Humby combining a brilliantly captured live performance with a distinctive brand of comedy - this time focussing on the character of Chayse Bigwood, first time tour promoter who's capacity for ineptitude is in inverse proportion to the quality of the music.This mockumentary takes us backstage before Shame's big London comeback gig at the Brixton Academyt, with virgin promoter Bigwood attempting to ingratiate himself with the band. The extend of the distastrous promotion becomes clear - no support acts, sparse audience of fleeced punters - while the band watch The Weakest Link before the show. Last-ditch attempts to hide the truth from the band precede what then transpires is a great show which, sadly, very few actually get to see live in the flesh. It's a sad story with powerful live music. In the manner of the previous Molten Jets shows, this half hour film feels incredibly intimate and authentic, due to the fly-on-the-wall cinematography and observational angles. The energy of the live performance spills over into something wonderfully transcendent and ethereal. DoP Claudiu Voicu balances the stripped-back, everyday colour palettes in the behind the scenes setups with the aspirational, neon washes of colour on-stage, creating a dynamic and engaging aesthetic. Meanwhile, Chayse Bigwood is now under police investigation for the fraudulent VIP hospitality package and his sideline in unofficial Shame merchandise - which is a bit problematic for Ja Humby. "Molten Jets’ affiliation with Bigwood’s elite fashion consultancy and holistic trending clinic - Hotbitz.biz - makes me a person of interest in the investigation," he admits."One thing I can do though is thank the amazing filmmaker Simon Halsall for his editing work on the performance bits. I’ve never worked with another editor on one of my own projects before, so it was refreshing to have more eyes on it. I probably butchered his work in my cut, but whatever, 'it’s rock n roll' as my old boss used to say."

Gregg Houston takes a trip down memory lane in the newly-edited live video for Bear's Den, from a show a couple of years ago. Actually shot in 2018, this presents an emotional, introspective performance of the song Above The Clouds Of Pompeii, from the band's shows at EartH in Hackney, which had just opened, accompanied by an orchestra.The cinematography is minimalist yet incredibly effective, capturing the event from several angles, with dramatic lighting cascading over the musicians.

videoMichael Kiwanuka 'Live At The Mildmay Club' by Huse Monfaradi

Michael Kiwanuka plays an intimate and transcendent set in Huse Monfaradi's long-form video, Live At The Mildmay Club. Shot by four handheld cameras, the magical performance is colourful, bold and engaging. With a real feeling of community and shared experience, the video captures the energy and spirit of Kiwanuka's music, as well as the captivating effect it has on the audience and musicians who work with him.

Coldplay perform the first half of their new ablum Everyday Life on a hillside in Amman, Jordan, at sunrise. Directed by Paul Dugdale, this was streamed live-to-air on YouTube on the morning of November 21st.And then... Dugdale filmed the band performing the second half of the album at sunset on the same day.Shot with the band, and additional musicians, performing in the round, Dugdale gets to the heart of Coldplay as a performing outfit and at the same time opens up the whole of their new album to their adoring fanbase. And, of course, the location is spectacular.Working with six cameras and a drone - and vision-mixing and cutting live, and no additional lighting - this is a brilliant document of a very special event, captured by a master exponent of live music direction.

videoMumford & Sons 'Delta (Live at the O2)' by Dick Carruthers

Mumford & Sons brought their ambitious new live show to the O2 in London on 29th November last year. Dick Carruthers, directing legend of live music, who had filmed the band during their tour of South Africa a couple of years ago - released as Blood & Thunder - came on board to chronicle the occasion, and from that has come this vibrant and emotional distillation of the evening, from soundcheck to the very end of the show.At its core is the performance that climaxed the whole show: Delta, the title track of the new album. It begins with the band playing the first section of this slow-burning epic during the soundcheck, in an empty arena. Then it transforms into a packed O2, and we witness that remarkable connection that the band has with their audience.With the stage in the middle of the arena, it's a radically different show for a band that have always been known for setting up in a line across a stage. Here at the O2, the crowd envelop Mumford & Sons from all sides. And Carruthers' command of his multi-camera team ensures that you get the complete scale of the occasion as well as the small treasurable details of the band's performance on stage - and the warmth between them.

Jamie Carter captured the moment at one of Ed Sheeran's recent shows at Wembley Stadium where he welcomed Andrea Bocelli to the stage, to co-perform Perfect Symphony in concert for the first time.It's a fine document of Sheeran's stagecraft and his and Bocelli's absolute command of the vast audience, with a terrific sense of a special happening on a summer night in London.

Alicia Keys is the latest artist to film a Take Away Show for French music network La Blogothèque, directed by Colin Solal Cardo. This intimate concert film, performed for only a hundred fans at Paris&rsquo; Le Comptoir Général in May 2016, was captured by the director in long takes with a one camera on a single lens. An acoustic set, accompanied by the bassist Adam Blackstone, Keys plays She Don&rsquo;t Really Care, 2003&rsquo;s You Don&rsquo;t Know My Name, In Common, Hallelujah, and The Gospel, which appeared on her latest album HERE. It was an experience that she has described as &ldquo;one of the coolest, most magical and intimate moments I&rsquo;ve ever experienced. I&rsquo;ve been dying to share this video.&rdquo;

Gregg Houston aka Babysweet has delivered this new music video for Circa Waves' Young Chasers shot during the band's performance at Alexandra Palace, confirming that good rythmic editing and varied shots of the band's pre-gig hang-outs, fast-paced performance and the crowd's energetic response can go a very long way.

videoFickle Friends 'Could Be Wrong' by Raja Virdi

Shot on and off-stage, Raja Virgi captures a tasty performance by Fickle Friends at North London venue KOKO and turns it into a promo for the Brighton band's new single Could Be Wrong.