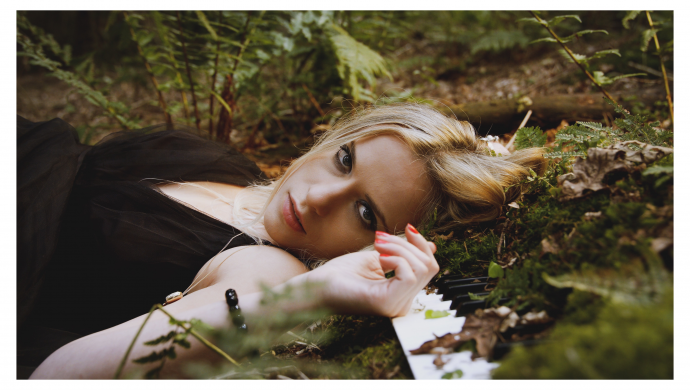 Corinna Jane is a Franco-British singer-songwriter born in North-Rhine Westphalia, Germany, but did most of her growing up in Northamptonshire, England and was fortunate enough to grow up speaking English, French and German. However, fed on a diet of MTV, her biggest passion has always been music. She began to play tunes by ear on the piano as a child, before taking up piano and singing lessons at the age of five and began composing when she was six and subsequently establishing herself as a singer-songwriter in her teens crafting her own brand of quirky (often piano driven) driven alternative singer songwriter pop.
​
Since then Corinna has enjoyed airplay on numerous radio stations including BBC Radio 6 (Tom Robinson), BBC Introducing (Northampton, Bristol and "The Beat" East Midlands,) all BBC regional stations (Mark Forrest evening show) Amazing Radio as well as being interviewed in German and playing live on Berlin's RBB 1. She was also interviewed on prime time London Live TV.
​
She has toured extensively acoustically and with her band across the Midlands, London and parts of the North in venues such as The Bedford, Proud Camden and The Water Rats and festivals such as Lechlade, Lainfest, Main Stage at Wilkestock, Main Acoustic Stage at Victorious Festival and The Great Escape Festival and has also supported Leddra Chapman, Marina Celeste (of Nouvelle Vague) and Blackbeard's Tea Party. In the past she has also played New York's oldest rock club "The Bitter End" and toured in Germany.
​
Corinna collaborated with top German EDM producer Mark-Oh on "That Feeling" as a featured artist/co-writer that has gained over 150,000 + plays on Spotify and recently also collaborated with Argentinian DJ Mr.Brackets on "Moments", which is also gaining traction at 170,000 plays so far. During lockdown, Corinna Jane has seen success with her acoustic piano/vocal covers of REM’s “Losing My Religion” and Dua Lipa’s “Don’t Start Now” rack up over a combined 400,000 plays on Spotify.
​
In 2020 Corinna Jane is released a special EP titled "Song For My Mother" dedicated to her mother who passed away earlier this year. The EP features "The Train" and "Pour Me A Glass Of Tomorrow" both of which are folk in nature and are poignant observation on the life's rich tapestry.
This Corinna will be unleashing a brand new bigger pop-rock sound on her upcoming Queen Of Wands EP produced by Francesco Arpino in Rome. The first single will be “Give Me A Sign”.
​
____________
​
Corinna is also a photographic model, presenter (travel and movie premieres) and actress. She has produced and edited a series of online travel shows, as well as interviewed the likes of Samuel L Jackson, Amanda Seyfried, Carol Vorderman and many more! She is also a keen video producer and editor having co-directed and edited all her music videos to date.