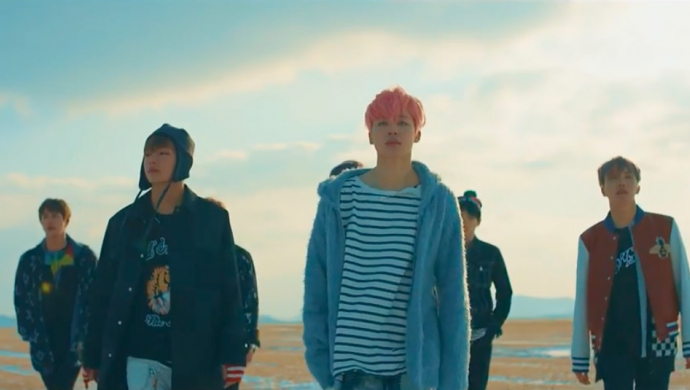 2017 was the year that non-Anglo music rose to the top - even above Taylor and Ed - with Latin pop, Brazilian funk and K-Pop videos posting mind-boggling figures on YouTube. So now Lassamie Prasimay takes us through is a selection of some of the most creative videos from around the world - from Argentina to Japan – that we missed first time around, in '17.

There have been quite a few great animated music videos this year, including this one for Buenos Aires-based band SIAMÉS.
Each hand drawn frame really draws the viewer into the thick of the action through fluid movements and slick transitions, as three characters are being chased down by a morphing shadow. The only hint of colour in this desolate, monochrome world is the vivid red of the creatures’ eyes, hungry for blood.

Videos are a big part of what distinguishes BTS from other K-Pop bands. Each one, directed by YongSeok Choi (aka Lumpens), is crafted to match the band’s unique sound. And this one for Spring Day is perhaps the most beautiful and symbolic one of them all, with imagery that hints at heavy topics such as loss, loneliness, death, yet also friendship, hope, and new beginnings. As each member carries out their own role within the narrative, their individual stories unfold, before they all reunite once more to carry out a final tribute.

Not only is this song created by Australian trio BRÅVES stunning, but its one-shot video is shocking in its own right too. Perfectly timed actions synch up with the song's main beats, each revealing something unexpected at first sight. The slow, lengthy build up is definitely worth the morbid twist at the end, which is emphasised by the singer’s powerful vocals.

Kom_I, the lead singer of the Japanese band Wednesday Campanella, is whisked away into a world of wonder as she dances the night away amongst fancy-dressed party goers. As her eyes meet those of a beautiful stranger, she falls in love with the mysterious Ikkyu. However he is not all he seems to be... The visuals of this music video are entrancing, especially because of the vibrant colours and lively crowd of odd characters. There is an especially magical scene when everyone freezes in time, allowing Kom_I to approach Ikkyu.

Guided by a smooth, hypnotic melody, the viewer is taken on a tour of some of Hong Kong’s most atmospheric locations. As we shadow a dancer into the night, the city comes to life under neon lit signs and through the encounter of bustling locals. This music video for Japanese DJ Mondo Grosso was masterfully shot by DoP Chigi Kanbe.

As much as I hate viewing soppy romantic action, this series created by the Korean entertainment company CJ E&M got me hooked. I’m not sure if I can qualify these as music videos, as they are more like mini-dramas accompanied by an original soundtrack. Either way, I waited each week for a new clip to be released to watch the story of this young couple unfold to a new song by a different artist. Perfect for my short attention span, plus it was a wonderful way to discover new songs! I was particularly fascinated by these distanced collaborations by the different singers, each working separately to piece together the same narrative. And this worked brilliantly.

The German rapper literally takes a trip down memory lane through a dizzying whirlwind of past and present memories, triggered by the playing of a cassette. These flashbacks are discoloured and warped in his mind, each overlapping the next so fast that it’s hard to grasp each snapshot. Is it a brief moment of nostalgia, or is life really flashing before his eyes for the last time?

In this music video for French singer Slimane, a man is rejected from his community for his peculiar chameleon-like skin in a world drained from colour. However when he meets a kindred soul, their uniqueness transcends hatred through dance.

In this brilliant short for the Brazilian band Vivendo do Ócio, a dog’s greed for money is punished by monstrous creatures. The visuals range from abstract to fantastical through a mix of various animation techniques (between 2D and 3D), creating a twisted and Dantean world tinted in sinister shades of red and grey.

Best of 2017: Promonews' Most Viewed Music Videos of the Year

Here are the nominations for the UK music genre categories at the UK Music Video Awards 2021 - including director, production company, commissioner and label credit information …

James Fitzgerald directs an unlikely love story for Forest Blakk's Fall Into Me, when a shopping mall worker strikes up a relationship with an after-hours cleaner - who's half-human, half-wolf.

Ladybug's latest lyric video is a scrapbook-style video, taking a peak into V.I.C's thoughts, for Maybe.

James Fitzgerald directs an unlikely love story for Forest Blakk's Fall Into Me, when a shopping …

Henry Oliver blurs the line between our online and offline worlds, in this radiant promo for …