If you attended the UK Music Video Awards 2016 last Thursday, at some point you may have entered the Photopod &ndash; a supersized photobooth with interior decor by MVA16 artist REILLY&ndash; probably with a few friends, and possibly wearing a funny wig and oversized sunglasses.You have no reason to fear. Like an automated Rankin, the Photopod gets the best out of people, and never takes a bad photo. But you can judge for yourself, as all 65 sets of Photopod pics - a set of 4 individual shots, in photobooth fashion - are now up on a photo album on Flickr. So you can decide whether that shocking pink wig was a good idea. And gif versions of the Photopod sets are now going up in the gif gallery on the UKMVAs website. 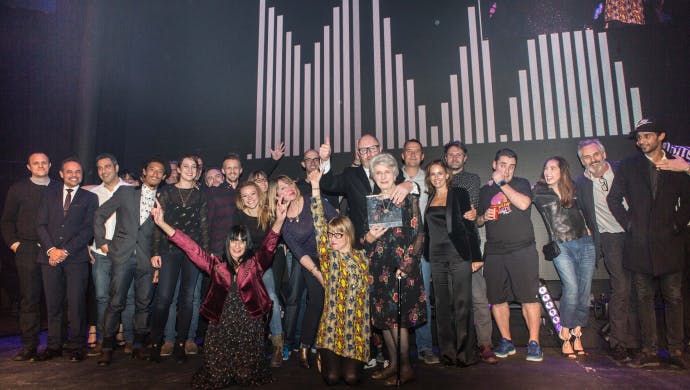 So, at last - it's showtime!The UK Music Video Awards 2016 takes place at legendary music venue The Roundhouse in London tonight (October 20th), where a packed house will celebrate the past year's achievements in music videos.More than 30 awards will be handed out in a show presented by comedian, music video expert and regular UKMVAs host Adam Buxton.For those attending tonight's show, the doors open at 6.45pm for pre-show refreshments, and the show starts promptly at 7.30pm.

Soho-based post-production studio Loco Post are once again teaming up with the UK Music Video Awards. For the ninth year in succession Loco is post-production partner for the UKMVAs and sponsoring an award at the premiere music video awards show.For the second year running Loco are sponsoring the Best Rock/ Indie - UK Video category at this year's UK Music Video Awards. The production team at Loco led by Arlene Dignam are also working closely with the UKMVAs team to design and edit the nominations packages for projection on the big screens on the big night on October 20th.This year Loco animators will also be collaborating with celebrated artist Reilly and long term UKMVA art directors StudioThomson to bring to life his artwork for the big screen. It will be the latest in a creative partnership that goes back to the first UK Music Video Awards.Loco is a leading creative content production facility with over 20 years in the post-production industry, with a talented team of animators, editors, VFX artists, colourists and directors who share a passion for visual media, and consider music videos as a natural extension of their creative ethos.Danny Coster, MD of Loco says, &ldquo;We are incredibly proud to have been the post-production partner of the UKMVAs since their inception eight years ago, and we continue to enjoy the creative collaboration with the extended MVA team.&rdquo;Our creative teams at Loco love working with music videos as it gives them opportunities to explore concepts and techniques with real freedom, and our sponsorship of the Best Rock/Indie Video - UK category is a great way for us to get behind some truly outstanding filmmaking.&rdquo;The UK Music Video Awards 2016, a celebration of the best of British and international music videos across a wide range of genres, budgets as well as creative and technical disciplines, takes place this year on Thursday, October 20th at legendary London music venue The Roundhouse &ndash; hosted by Adam Buxton.Tickets are still on sale to the UKMVAs ceremony and aftershow party &ndash; visit the UKMVA website for more details and booking.

giffgaff, the UK's flexible, no-contract mobile network, has become the latest partner of the UK Music Video Awards.giffgaff believe in fostering and working with up-and-coming creative talent, and they will be sponsoring the Best Video categories for Newcomer at this year's UKMVAs. The Best Video categories for Newcomer at this year's UKMVAs are the five categories that honour the best work in music videos in the past year by up-and-coming directors, working on budgets under &pound;5K. The five awards cover the range of music genres - Pop, Dance, Urban, Rock/Indie and Alternative.Abi Pearl, Head of Advertising at giffgaff says: "We're super chuffed to be sponsoring The Best Newcomer video awards at this year's UKMVAs. We've been lucky enough to work with some great music promo directors for our ads over the years, so it's great to be able to support emerging talent."News of giffgaff's involvement in the UK Music Video Awards follows the announcement last night (Sept 21st) of the nominations for this year's UKMVAs. The UK Music Video Awards 2016 ceremony and aftershow party take place at The Roundhouse in London on Thursday, October 20th. Tickets are available to book here.

Leading fashion magazine and website i-D has become the latest partner of this year's UK Music Video Awards, sponsoring this year's Best Styling in a Video award. It's the third year that i-D is sponsoring the award that honours the greatest achievemnts in wardrobe and hair and makeup styling in music videos over the past 12 months.Eloise King, global editorial director at i-D, says: "The UKVMA's is a gathering place for the very best in visually rich and innovative storytelling. With music video providing a cutting edge insight into youth and sub-cultural style evolution, i-D are privileged to support the styling category and celebrate the very best of fashion in film."The UK Music Video Awards 2016 takes place for the second year running at the legendary Roundhouse in London on Thursday, October 20th, and tickets for the show and aftershow are available to book now at ukmva.com. Nominations for this year's UKMVAs will be announced at a nominations party held at The Mill London on September 21st. More details to follow.