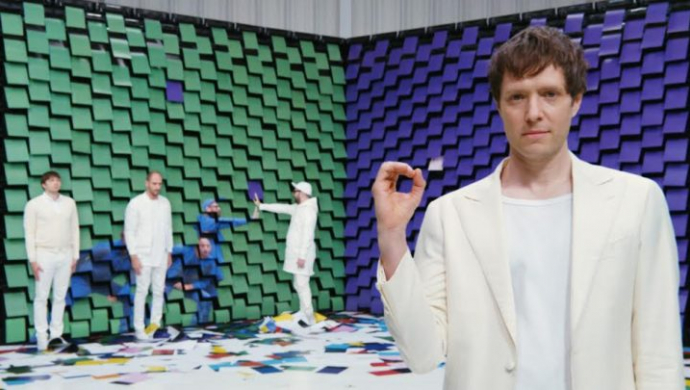 Have OK Go faced their most difficult challenge yet?  Okay, in the past they may have battled against the perils of treadmills, marching bands, Rube Goldberg Machines, dogs, and weightlessness (and won). But until their new video for Obsession, they had never pitted themselves against the least reliable form of machinery known to man - the domestic printer. And for Obsession, they were working with 567 of them.

The Obsession video was the co-directing collaboration of OK Go's lead singer Damian Kulash and Japanese director Yusuke Tanaka, who talked to Kana Yamamoto about making this overwhelmingly impressive exercise in 'paper-mapping' - made in association with Thai paper company Double A. Translation from Japanese by Rika Yamamoto.

KY: This music video has a visual surprise and explosive beauty. How did the project begin?

YT: I was given a brief of “printer 3D projection-mapping”, which was the theme of this video. The client for the project was a Thai paper manufacturer called Double A and their 'extra smooth paper' [which is specifially designed to eject smoothly from printers]. And rather than projection mapping, which projects objects onto walls, we started with the idea of “let’s show visual illusions by using the paper. We can build walls of printers.”

This was an OK Go video, so it had to have visual surprises. [And] with a very pop perspective of graphic design, the combination of printer 3D projection mapping and OK Go’s performances, we created fun and excitement.

We cut the music into 13 blocks and everyone contributed all the ideas. How did we choose which ideas we were going for? We just did test after test.

"Damian is very clever. I had to be on my toes all the time because he would ask me electrifying questions" Yusuke Tanaka (above)

Is it true that this took two and half years to complete?

They came to Japan twice before the actual filming. We built a 'small' wall of 100 printers and ran simulations, projected the images onto the screen, and checked OK Go’s performance of their flying scene, etc. Ideas require technical tests, physical tests and visual tests - just repeatedly testing and testing. And during the tests, more new ideas came up or needed to be changed. This helped us move the project forward.

Tell us about the real filming. What was it like?

It must have been mentally and physically hard work to shoot 36 times the length of the song?

Technically speaking it is one take. Overcranking at 36 times speed means taking 36 times more time. We had to keep feeding paper into the printers, and therefore, we paused the take at certain points. We knew exactly which frame to stop thanks to Rhizomatiks Research, who calculated when exactly we would run out of paper, so we could stop and feed in the paper and start it again. We tip-toed across the room trying not to disturb any paper on the floor.

At the scene where the bandmembers of the band throw the graphic ball projected on paper mapping, the alignment was slightly wrong. But when we realised it needed to be fixed, we could correct the position and it looked fine at normal speed. We were constantly shouting: “Damian, right”. I had to do it, too, especially as it was so noisy in the studio. Although I'm known as a quiet director, I did shout in this music video.

It's a brilliant feature that the camera moves and the ball from OK Go gets sucked into the black hole of print animation at the background...

It was a key scene of this “printer 3D projection mapping”, where the planar expressions translated into 3D. We matched the viewpoint to the paper mapping images which then gave an illusion of a hole on the wall with an endless depth. We always made previsualizations and validated the camera work and visual movements.

You also used stop motion. It gave a good accent to it.

Yes, it was when the camera panned down to the printer on the floor and it started spitting prints out, the image on the paper was OK Go performing which we filmed beforehand. Another one is when the papers pile up and sync-danced with the music. It was a race against time.

“The smoothness is a massive selling point of Double A papers. In fact, we didn’t have paper jams. I was so happy about that”

To resemble 3D, OK Go members flew in the air. Where did the “wire work” idea come from?

Right after the break in the song the tropical island appeared. This island is called Maiton Island and is owned by the client. They requested us to let it appear on the video. OK Go flying away from the island was elaborately planned to make it appear natural. But if they just flew away, it wouldn’t be impressive. Then we did the combination technique of wirework and projection mapping. We moved the camera from horizontal to a downward view from the air. In order to do that, we needed to add some camera work by CG. Staff actually went to the island and filmed 360 degrees scenery by a flying drone camera. You can’t film like this with normal aerial shooting.

OK Go’s previous video, for The One Moment takes the opposite approach, doesn’t it? It was choreographed to stretch a few seconds into a whole video. Do you think this video is the response to the last one?

Possibly. But this one took three years from the initial planning, so I’m not sure. OK Go, are a creative group with both art and scientific ways of thinking.

Damian is just very clever. He is a musician and a creative director. Also he is a client. He is very bright in the field of arts and sciences, or probably any field. I had to be on my toes all the time because he would ask me electrifying questions.

When we were testing the camera work for motion control, we didn’t have enough arm lengths for a machine. We were saying that this is the closest we could get but then Damian said “why don’t we move like this so that it can get closer” and drew a brief illustration. I feel that I’m cleverer now after working with him. He stimulated my brain cells. “Damian shock (lol)”.

It wasn’t easy to film this music video at all. Sometimes people are timid and unsure but he wouldn’t give up easily, always wanting to make it happen because he believed that they were great ideas.

"Damian wouldn’t give up easily, always wanting to make it happen because he believed that they were great ideas"

Did you enjoy it?

Yes, it was fun. I like to collaborate with creative people overseas. I found that the larger parts of the creative processes were very different to what I normally do, even though the small parts can be similar. When I direct music videos, I normally listen to music lots of times and try to interpret it first. And then I start to create visual images. I’m not sure it is just because of OK Go and that they are special. Their approach was completely different and it was a new experience for me. I was excited to challenge new innovative ways of working.

I’d like to do dramas. I’m still learning about it though, I would definitely like to make a feature film.

It's difficult to put the immense scale of Romain Gavras' stellar video for Jamie xx's Gosh into words, which is probably why this Behind the Scenes documentary by Kim Chapiron is …

In may three new videos for three classic Elton John tracks were released, as the culmination of The Cut, a competition timed to coincide with the 50th anniversary of Elton John and Bernie …

Ruthless Cuts, the behind-the-scenes series produced by top London editing house Cut+Run, returns with a brand new episode in which Nathan James Tettey talks about the series of videos he directed …

Francis Wallis teams up with long term collaborators The Bloom Twins, in his ethereal, …

Charlie Sarsfield directs the third instalment of Apple Music's The Agenda Live, for "Queen of The …