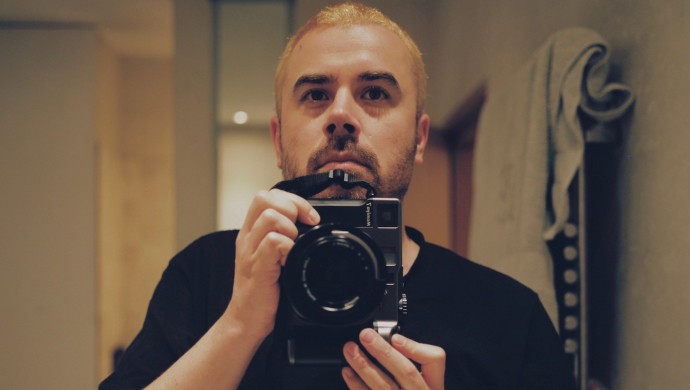 Tim Smith has been one of the most prolific colourists in the busy landscape of UK music videos for the past few years. Just in the past 12 months or so, his credits have include heavy-hitting videos for Kano, Metronomy, Collard, Grace Carter, Ray BLK and many more. And that's before his work on numerous ads, and other films.

Tim is originally from Worcestershire, and was an avid skateboarder in his youth. He began his journey to the grading suite at the University of Lincoln, where he studied photography. Somewhere From there, it was down to the Big Smoke to get involved in London's post production scene.

Now 33 and residing in Clapton, East London, Tim moved to become a senior colourist at CHEAT in 2018. In the return of our non-lockdown Q&A format, Tim gives us an overview of his Work and Life - which includes being one half of DJ combo The Pentagon Faceslap, having a surprisingly link to Formula One superstar Lewis Hamilton - and reveals his advocacy for better mental health.

How long have you held your current position? What were you doing before this?
One year at CHEAT. I was doing the same thing before, just with different people :)

What was your first job, or first significant break in the industry?
My first break was as an MCR operator at The Mill. Then I progressed into working in the data lab and it all spiralled off from there. A very excellent Flame op called Adam Watson vouched for me when I went for the job in MCR, so massive thanks to him for being a downright decent geezer and putting faith in me!

Name one music video that inspired you to get involved in making music videos?
I think seeing all of the early Spike Jonze videos for Sonic Youth, Pharcyde, Beastie Boys, Dinosaur Jr, etc were hugely influential to me being a skateboarder, as I was exposed to a lot of that music and culture at a young age. They were quite hard to watch and see when I was younger as I didn’t have MTV or anything like that, so it was always great to catch a decent video on TV. Jon Glazer’s work was hugely influential to me also!

Early Spike Jonze videos for Sonic Youth, Pharcyde, Beastie Boys, Dinosaur Jr [above] were hugely influential to me, being a skateboarder.

Name one project you’ve done that was significant as a learning experience – and why?
Sony Bravia with Ben Tricklebank was a huge learning curve as it was my first foray into grading in HDR. Setting up a new workflow and grading in such a different way to what I was used to was really thrilling. I think learning and progressing onto new things is such an important part of what I do.

What are your favourite music video-related jobs of the past year or so, and why?
I’ve been working with the director collective SOB on a series of promos for Collard, and it has been fantastic. To see them develop and grow as directors producing work that is consistently better and better. It’s a really fulfilling part of the job seeing new talent progress and develop so closely like that!

I have been lucky enough to work on lots of other fantastic music videos with amazingly talented directors over the past year also but they have definitely stood out to me.

What are your favourite other jobs of the past year or so?
ASICS Evoride with Roger Gonzales. This was fantastic because the concept was brilliant and the execution was second to none. The DoP Chris Ripley did an amazing job. He has such a fantastic dialled-in attention to detail, so working together with him and Roger was a dream.

We also printed to film in a fairly unique way, by printing our tech grade out to intermediate negative but in 16mm format, then rescanning so we could achieve a really faithful and natural grain. Big shout out to CInelab and Adrian Bull over there for making it happen and No8/CHEAT gang too.

We were able to create and engineer a fantastic remote work solution for lockdown - I've been grading away with my home suite set up the whole time.

What are you currently working on - and how has working been affected by lockdown?
Working through lockdown has been great. At CHEAT we were able to create and engineer a fantastic remote work solution, so I have been grading away with my home suite set up the whole time. It's been fantastic and I have had a wonderful team supporting me along the way!

There are a few things in the pipeline at the moment; including a wonderful documentary called WIFI Rider by my friend Roxy Rezvany, about a Palestinian teenager grappling with his identity under the pressures of both Israeli occupation and Western pop-cultural imperialism. It is a beautiful documentary shot on 16mm film.

What kind of work would you like to be doing in future?
For me it is all about progression, challenge and collaboration. If I can continue to work with the wonderful directors and cinematographers and editors I am currently working with and create more beautiful work then I’ll be happy!

What advice would you give someone entering your field?
Work hard, learn to take constructive criticism and walk before you can run. There is plenty of time and I think it’s best to soak up and learn as much as you can from your seniors/mentors. Also, make sure you love and care about what you are going, because it really pays off in the end.

For me it is all about progression, challenge and collaboration.

Tell us something that we don’t know about you?
I once body-doubled for Lewis Hamilton.

When you’re not working, what do you like to spend time doing?
I am an avid collector of jazz records, which I have been doing for over 20 years now. So I spend time obsessing about finding the right pressing of a particular Blue Note record I have been after for a while. A lot of these records are played on my radio show on NTS Radio every month. I also take a lot of photographs too, so editing and printing them is a pastime of mine.

Where did you go on your last holiday (or vacation)? And where would you love to visit?
Last vacation was Paris/Antibes trip via train and it was wonderful. I’d love to visit Japan. it has been on my list for a very long time so hopefully in the future I’ll be able to go!

I once body-doubled for Lewis Hamilton.

What are your favourite currently-running TV shows?
I am still taking time catching up on older shows to be honest. I am currently finishing The Sopranos and about to re-watch Twin Peaks. I’ve lost count of how many times I’ve watched it but it never gets old to me.

What’s the best movie (or movies) you’ve seen recently?
Parasite. It was a masterclass in filmmaking and a truly brilliant watch.

What are your favourite music videos by other people in the past year?
James Massiah - Natural Born Killers (Ride for Me) [directed by Ian Pons Jewell]. Really enjoyed this, stunning cinematography and a great concept really well executed.

Favourite music artist(s), and favourite gig(s) in the past year?
Seeing Phillip Glass’s Bowie Symphonies performed by the London Contemporary Orchestra at The Royal Festival Hall was possibly one of the most beautiful things I have ever witnessed, as that particular suite of music is extremely sentimental to me in many ways. I felt a tear running down my cheek after the first note.

We are all in this together and now more than ever we need to be supportive and loving towards one another.

Exhibition-wise, I think seeing the Great Animal Orchestra at 180 Strand. Such a moving piece of work which shows with such clarity the effect mankind has had on our wildlife and environment.

Don McCullin at the Tate Britain also, as he was and still is a huge influence to me. Plus the fact that I got to meet him, ask him a question at the Q&A and also got one of my books signed by him, that was special.

Favourite food and/or favourite restaurant(s)?
UMUT2000 in Dalston is the place I would eat if the end was nigh.

What’s your favourite political or charitable cause, and why?
CALM, and The Samaritans. These are both very important to me. As someone who suffers from depression and anxiety and has also lost people close to me from suicide it’s very close to my heart and a hugely important cause.

To anyone who is reading this and struggles too, remember it’s okay and very important to talk about how you feel and it can truly save lives. To everyone else who manages to get on with life more easily, check in on your friends and family and see if they are okay! We are all in this together and now more than ever we need to be supportive and loving towards one another.

Best recent purchase?
I only tend to buy records and food these days so any one of the numerous records I have bought recently will do. They bring me a lot of joy.