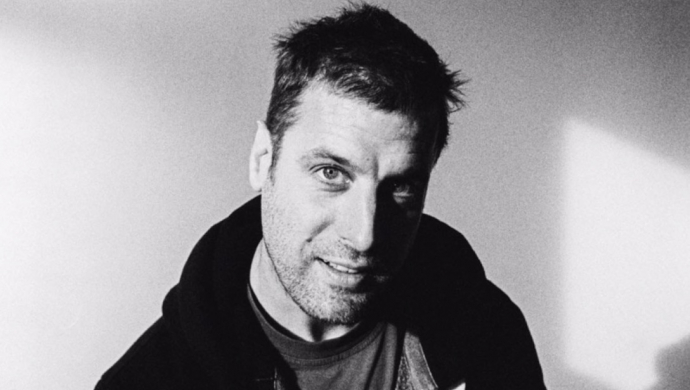 Thomas English has been a successful Steadicam operator for more than a decade, and now he's also an increasingly in-demand DoP. Even in this tumultuous year he has continued to progress in this new role, busy on a range of work, from music videos for Jehnny Beth, Greentea Peng, Mae Muller, and livestreams for Kylie Minogue and Yungblud.

With a French mother and English father, Thomas grew up in both France and London. He went on to study Marine Tech and Underwater Studies at Plymouth, and then Environmental Sciences in Brighton. During those years of study in the Noughties, he was also involved in organising raves and VJing - including smuggling giant projectors over the fence at Glastonbury.

There's a lot less partying these days for Thomas, who lives in Forest Gate, East London with his fiancee, the storyboard artist Michaelia Wu. It's all about the work...

How long have you held your current position?
I’ve been DoPing on the downlow for a very long time, but I was having such success as a Steadicam operator I wanted to keep it quiet. I went full force into DoP-ing a few years ago and now it takes up all of my time.

What were you doing before this?
Jetting about the world as a Steadicam operator. I am still getting pencils from the likes of Christopher Doyle and other insanely successful DoP’s, but turning them all down these days to do low budget promos. Fun times!

The VJ days were great! Pretty sure I invented the lens flare...

What was your first job, or first significant break in the industry?
I used to live in Brighton making rave visuals and DoP-ing music videos and little arts films. I used to make a lot of Dance 4 Cameras, where the choreography was for a camera frame rather than a stage and the camera could also move as another dancer. That was becoming its own filmmaking genre at the time, spearheaded by Liz Aggiss who also lived in Brighton.

I had a good thing going making visuals for bands, festivals and theatrical shows. I would shoot the content, edit and do the AfterEffects just when Adobe and Matrox were first making it first possible to do so on a home computer. The VJ days were great! Partying and making mental visuals to then go mix live at festivals and raves. Luckily I’ve grown out of all that hedonism. Pretty sure I invented the lens flare though.

I was one of the first operators in the UK to use the MK-V AR rig or Omega rig. A job for Barry Ackroyd came in where we hacked the AR rig to spin the camera, an Arri 235. I think for about a decade after that I was the Steadicam camera spinning man. It’s pretty common place these days. Here's a good example, for a Welsh Anti-Smoking Campaign about ten years ago.

I was the Steadicam camera-spinning man for about a decade.

Name one music video that inspired you to get involved in making music videos?
Kylie Minogue's Come Into My World, directed by Michel Gondry has to get a mention here. This was seminal! My other favourite is Lucas With The Lid Off - again by Gondry. I guess I always was and remain obsessed with the visual twists.

Name one project you’ve done that was significant as a learning experience – and why?
I try to have a significant learning experience on every job, whether it's a new style, art or technology that I can research myself through the job. For example, I had a go at operating motion control the other day for Greentea Peng's Revolution without a tech. I had to learn how to use Mantis before the job.

I had a go at operating motion control for Greentea Peng's Revolution without a tech.

I've also been doing a lot of multi-camera stream work recently, which is a whole new world of meticulous planning, previs and working with LDs for what is essentially a one-off broadcast.

And for my personal project Hyper Dream I've been shooting stills of dancers and athletes which I then take through a full environmental CGI workflow (example below). I rebuild my subjects’ worlds using redshift and Houdini, placing them in weird and fantastical landscapes. I’m planning on moving onto musicians next.

My obsession is with the border between in-camera SFX and VFX. I'm learning Houdini and using it to test that border between SFX and VFX, and previsualisation ideas. So really every day and every job is breaking new ground for my techniques.

It was always amazing going out on the big feature films and shows as a camera and Steadicam operator. Disney's Cruella, Kingsman2, Dark Crystal, Utopia, and even Dr Who were incredible. These jobs and the way they go about things have taught me a lot.

I did a year on the Dark Crystal shadow unit on  in 2018 for an incredible director, Louis Leterrier - a powerhouse who also operated his own Steadicam. My main task on Dark Crystal was solving SFX camera moves for VFX. A lot of the time the puppets can’t move, so you're on greenscreen, figuring out how they moved relative to the camera in the original plate. It was a great learning experience.

What are your favourite music video-related jobs of the past year or so, and why?
It's got to be Kylie Minogue’s Infinite Disco [directed by Kate Moross and Rob Sinclair]. So much planning and previsualisation, and then communicating with four moving camera operators.

I’ve been doing a lot of these “live” music video-event hybrids recently, they're great. It's a different workflow working with crew chiefs rather than gaffers, and far less flexible installs than we are used to working in film, but they are great fun. These jobs have so many moving parts you simply can’t make up shots and lighting on the day. The pre-production is very serious.

And another favourite is the recent YungBlud performance for the MTV EMAs, directed by Lewis James.

Also, Jehnny Beth's I'm The Man with Peaky Blinders director Anthony Byrne was an incredible experience - a one shot video with a lot of complicated lighting. I had to light it in the daylight and shoot the first take as soon as it got dark, so it was a real nail biter job. I’d had to light it in my head. I shot it using my AR rig and there was a real tricky switch into absolute floor hugging low-mode at the end.

I'm The Man was a real nail biter job. I’d had to light it in my head.

All of Melody Maker's promos are a pleasure to work on. We've done a few super low budget ones for Greentea Peng recently. And Izzy Bizu's Tough Pill, directed by Sashinski, was a great experience and went down incredibly well. I am constantly getting positive feedback on that promo.

A few months ago I got to work for my childhood idol Sophie Muller on her Mae Muller promo! I used to subscribe to Promo magazine, for what felt like a fortune 20 years ago, just so I could read about the promo legend that is Sophie Muller.

What are your favourite other jobs of the past year or so (if any)?
Having the A team out in Portugal for Melody Maker's commercials for Oppo was amazing! Choreographed by my favourite Maëva Berthelot and working with the incredible Sol Martin, Marta Carbonellamela and Nicole at the Mill. We were able to test visual effects on the fly and incorporate them in to the job. It truly was a golden time.

As a Steadicam operator there were definitive high points - like working with Taylor Swift, Fka Twigs, Mick Jagger and Ed Sheeran.

What are you currently working on?
Aside from Hyperdream, I’m working on a little stack of lower budget promos that seem to be constantly trickling through.

What kind of work would you like to be doing in the future?
I'm currently fascinated with motion control. I think I’ve watched every mo-con showreel in the world half a dozen times.

I think I’ve watched every mo-con showreel in existence.

Tell us something that we don’t know about you…
I’m French and my name is English.

When you’re not working, what do you like to spend time doing?
I am either shooting or editing stills or continuing my sisyphean task of learning Houdini. I’m not sure exactly why I decided to throw myself into Houdini for my previsualisation work but it's been fun. I made this over lockdown.

I also just bought a one-wheel with the intention of doing handheld off it…… I’m putting in lots of time falling off it right now.

I just bought a one-wheel... and putting in lots of time falling off.

Where did you go on your last holiday (or vacation)?
Well, you know, this global pandemic has made that difficult this year. We did manage to go to Lisbon for a week at the end of August.

And where would you love to visit?
Cuba!!!!!!! If anyone wants to book me for a promo out there I’d be overjoyed.

What are your favourite currently-running TV shows?
Currently really enjoying The Queens Gambit. And have you noticed the five missing episodes of Rick and Morty just appeared!

What are your favourite music videos by other people in the past year?
Dua Lipa has been putting out some belters, and Henry Schofield double-smashed it on that. And I really loved Keith Schofield’s previsualisation promo for Duck Sauce.

Favourite music artist(s), and favourite gig(s) in the past year?
Unfortunately we’ve been in a pandemic! I’ve not been to see anything in a lifetime! Saying that, when we went to Portugal in the window at the end of August we spent many a night in restaurants empty of tourists listening to Fado artists sing their hearts out. Pretty sure that was a once in a lifetime.

Favourite food and/or favourite restaurant(s)?
I am very partial to lasagna

My only hobby is working. I mean it's quite bad.

Best recent purchase?
Onewheel - see above. Its like a combination of a segway and a skateboard and I suspect more dangerous than both combined.

Work & Life - balance/ imbalance out of five (1 for imbalance; 5 for balance)
1. Yeah my only hobby is working. I mean it's quite bad. When on holiday I spend my time doing street photography and editing and messing with the images on photoshop/affinity on my ipad. Here are some photos of my amazing fiancee Michaelia Wu (a giant in storyboarding) from our last pre-pandemic holiday in Thailand. All edited drunk in a hammock on my iPad.

• Thomas English is represented by Sarah Prince at PrinceStone. Check out his showreels on his website.