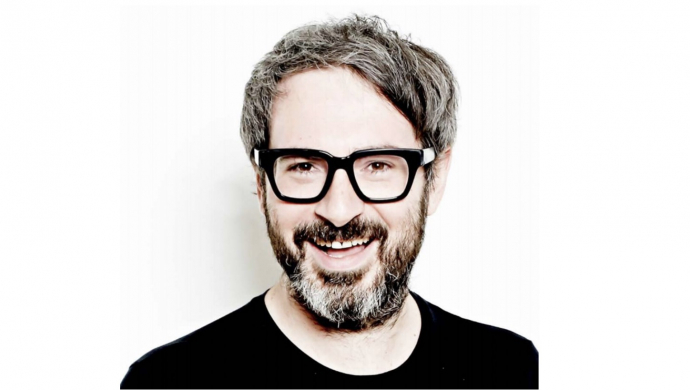 Price James has landed in Hollywood. The British director, who at 6ft 6in considers himself “officially the second tallest director in the UK” after a certain Dougal Wilson, has been marooned in Los Angeles during the 'pandy' - and this gentle giant is currently making big waves with his first movie, released last month: You Cannot Kill David Arquette, an unconventional meta 'documentary' he made with his good friend David Darg about an unconventional actor-cum-wrestler. The film has gained critical acclaim and a solid Rotten Tomatoes score of 84%. Not bad for a (self-confessed) Central St Martins layabout.

The film subject is, of course, the same David Arquette who starred in the Scream movie series, married to his co-star Courtney Cox (aka Monica from Friends), becoming a Hollywood A-list couple in the Nineties; and as member of the Arquette family, brother to actors Rosanna and Patricia, is member of a proper Hollywood dynasty. Arquette then outraged American wrestling fans by improbably winning the prestigious WCW World Heavyweight crown in 2000, consequently being described as ‘the most hated man in wrestling’. You Cannot Kill David Arquette is, among other things, the story of this maverick actor’s unlikely return to the strange world of professional wrestling.

Described by Indiewire as "The surprising love child of Sunset Boulevard and The Wrestler”, the film is streaming now on all the main platforms and has smashed into profit. That means that Price is now a proper Hollywood contender, talking to investors about his next feature script - which happens to be the one he was originally planning to make when he first arrived in Hollywood in 2018.

Price is also back in the game to direct music videos and commercials at Curly. He first made his name from the late Noughties onwards with outstanding videos for Simian Mobile Disco, The Gossip, Friendly Fires, and many others. He says that experience in music videos came in very useful on both the shooting and the editing of YCKDA . He is planning to come back to the UK to do the real thing very soon.

How long have you held your current position?
12 years

What were you doing before this?
I was in a band on Island Records in my 20s which ended abruptly on tour in America after playfighting with the drummer. My finger snapped in a game of mercy that went horrifically wrong. I fainted and pee’d myself. End of music career.

Before that, I studied Graphic Design at Central St Martins. It was the hype course in the year 2000. But after two weeks I realized I didn’t want a desk job and I couldn’t use QUARK, so I hung out with the AV technician Steve Radmall and learnt everything from him.

What was your first job, or first significant break in the industry?
Sasha Nixon at Partizan commissioned me to make a video for Shitdisco’s OK, which probably became my favourite video ever.

Name a music video that inspired you that get involved in making music videos?
Anything and everything by Michel Gondry. He proved you didn’t have to go to film school to make interesting videos. [Okay, so here’s a great, but lesser well-known Gondry video, for Japanese duo Cibo Matto]

Name one project you’ve done that was significant as a learning experience – and why?
Making a movie is the best film school you could ever want. Actually, practically making anything is. Certainly making Battlefield Casualties - my Action Man PTSD films I made with Matt Berry doing the voiceovers - was a big influence on making YCKDA.

You Cannot Kill David Arquette was supposed to be made in six months, but it ended up taking over two years. This was my first feature, so I felt I had to really lean into it. And with a real subject like this you don’t want to put the camera down.

The wrestling part is interesting, the way it's orchestrated – like a butch Cirque de Soleil. And then you have this sensitive guy, raised in Hollywood, who has been through the mill. It’s really a film about ageing and Hollywood, and being defined by celebrity. And how you fill the gap when the adoration dies away.

My friend David Darg came on board as co-director as he was great with camerawork and traditional docs. My main role was scripting, blocking of scenes, dialogue and making sure we were hitting the genre story beats. I edited it with Paul Rogers at Parallel.

Essentially I wanted to approach it like a genre movie in itself. And the genre I picked was the one I really loved when I was growing up, but couldn’t admit that for years because it was so uncool. It's the retro sports action movie genre! This is basically The Karate Kid, but with David Arquette…

It's basically The Karate Kid, but with David Arquette…

What are your favourite music video-related jobs of the past year or so?
Well, there hasn't been any, because I've been completely absorbed by the movie. But there are several music montages in the film. It’s been great fun making them, and that's where my music video experience came in very useful. Picking and licensing music is apparently my specialty now. I definitely learnt this from years of doing promos.

What are you currently working on?
Developing a show for FX, and finding funding for my next feature. Two and a half years ago, I arrived in LA with my own script to make a film. The day I arrived the company who brought be over told me that they only made documentaries and then suggested that I worked on their next project - the David Arquette doc. So now I’m back talking to investors about that first script that I wanted to make in the first place.

What kind of work would you like to be doing in future?
Making things that help you escape reality. And I really want to get back London to shoot some commercials and music videos with the help of Curly, my new London commercial home with Julia Frost and Rich Guy. I do miss London and the creative forces there.

What advice would you give someone entering your field?
Just make it. Don’t overthink, just do.

Tell us something that we don’t know about you...
I was signed to Black Dog in 2008. When I first met Ridley Scott, he caught me stealing fruit from his personal kitchen.

When you’re not working, what do you like to spend time doing?
I’m a foodie asshole, so I cook to relax. I’m the guy who spends three days prepping for a friend’s birthday feast.

Where did you go on your last holiday (or vacation)?
Back to London last Christmas for a booze and meat-athon.

And where would you love to visit?
Right now, anywhere!

What are your favourite currently-running TV shows?
Succession, Curb.

What’s the best movie (or movies) you’ve seen recently?
YOU CANNOT KILL DAVID ARQUETTE. Sorry for another shameless plug! We don’t have big marketing budgets, so I’m going all-in on the promotion!

There are several music montages in the film...that's where my music video experience came in useful.

What are your favourite music videos by other people in the past year?
Anything by Ian Pons Jewell [okay here’s the Beardyman video by IPJ, from last year]

Favourite music artist(s) in the past year?
I love Dream Wife right now.

Favourite food and/or favourite restaurant(s)?
All the street food in LA, because the restaurants try too hard and the waiters are annoying.

What’s your favourite political or charitable cause, and why?
MIND UK. For being such a wealthy state, California has the worst homelessness I’ve ever seen, and it’s hard to disconnect sometimes. You realise that charities like MIND in the UK are doing incredible work providing support networks. I wish California could replicate this.

Work & Life - balance/ imbalance out of five (1 for imbalance; 5 for balance)?
I don’t understand this question. So I guess I'm as imbalanced AF!

• Watch Price James’s music video and commercial showreel at Curly. You Cannot Kill David Arquette is available to rent and stream, or buy and download, on Amazon, Apple, and other outlets.

George Moore brings the retro vibes in his animated promo for David Guez.