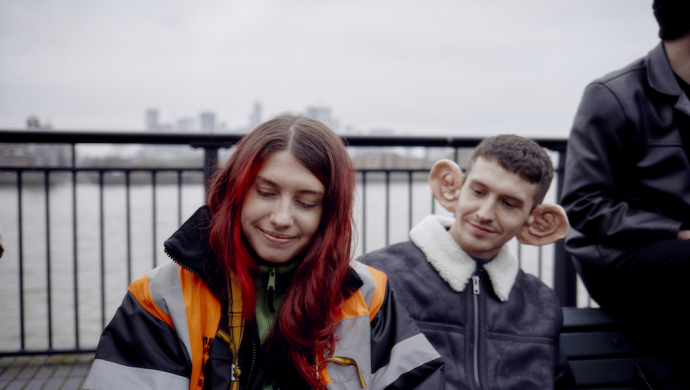 Jocelyn Anquetil has recently joined the directors' roster at Pulse Films in London, having made an eye-catching start to her career with videos for King Krule, Ashnikko, Declan McKenna, Tkay Maidza, and Goat Girl. Appropriately her first video at Pulse, for Bree Runway, is setting pulses racing. And she has also been moving onto brands, with a new ad for the new Adidas 4D trainer.

26 year old Jocelyn (above left, with boyfriend Jack Towell on her shoot for King Krule's Alone, Omen 3) is originally from Leeds but grew up mostly on Jersey in the Channel Islands. She headed to London to study Performance Design & Practice at Central St. Martin's, which she describes this as "a bit of a rogue course that sat somewhere between performance art, set/costume design and performance directing..." But it seems to have been an excellent platform to begin making films.

Now living in South East London, she has agreed to answer our Work & Life Questionnaire, to give us an insight into how she balances her busy work life with everything else. Spoiler: she doesn't really...

How long have you held your current position? What were you doing before this?
I’ve been ‘properly’ directing now for just over a year and a half. Before I was working as a treatment designer/director’s assistant, and spending a lot of time being sad that I wasn’t working on my own projects while desperately trying to get someone - anyone! - to fund something for me to do.

I suddenly realised music videos come from somewhere and get made by real human beings, and felt very inspired.

What was your first job, or first significant break in the industry?
I don’t really know how to answer this, or at what stage would be considered a ‘break’. I guess a big one for me is getting a short film commissioned by Dazed Beauty.

It was a collaboration between myself and my friend Fuego Nails [called Las Mujeres De Fuego]. We wanted to create a surreal, mythology-based film that used nails as a form of supernatural female empowerment. This was a springboard for me as it allowed me to actually pull my finger out, stop pipe dreaming, and make something that I wanted to make.

My break... making a film that used nails as a form of supernatural female empowerment.

It was also the job where I met my No. 1 production designer Ranya El-refaey - it was her first job too! - and my OG DoP Anna MacDonald. We all got on really well and have kept on working together since then. I really owe a lot of my work aesthetic to them and its been really nice how we’ve grown together.

Name one music video that inspired you that get involved in making music videos?
If we’re talking back in the day, then Beyonce/Lady Gaga - Telephone or maybe even Outkast - Prototype, or Butterfly by Crazy Town…

I kind of forgot music videos existed for a little bit and then suddenly realised that they come from somewhere and get made by real human beings, and felt very inspired.

I have a 'lessons learnt in hindsight' diary, in the event of future disasters.

What are your favourite music video-related jobs of the past year or so, and why?
It’s not really fair to pick a favourite. Also my career definitely doesn’t span far enough yet! Recently though, working on Bree Runway's HOT HOT was fun, just kind of going all out with the 90s/00s vibes and getting a bit silly and sexy. It was really cool working with the animators as well. That’s something I’ve always wanted to do as I do take a lot of inspiration from the shit-tonne of cartoons I watched as a child… and I also nearly died when we shot that oil scene. Omg.

Also had a lot of fun working with Tkay Maidza (remote from Australia) on her video You Sad. This one was just completely wild, directing from the other side of the world in a completely different timezone. A very strange experience - and not a lot of sleep in peak summer! All made better though by Tkay being an absolute five-star babe. Such a gem to work with!

What are your favourite other jobs of the past year or so (if any)?
I’ll always say the Alone, Omen 3 video [for King Krule] was good craic, mainly because it was made up of and made with loads of friends. It’s always weird seeing mates in that context, but it felt really nice having loads of friendly faces on set, we really felt the love on that one.

Generally I’ve had a great time working on all the videos I’ve done, as there haven’t really been that many. Generally I’ve been lucky enough to get to know/collaborate with the artists I’m working with, like King Krule, Ashnikko, Goat Girl and Declan McKenna, which has made each experience very individual but fun...in the end! Can’t lie, there’s a lot of stress involved in each one every time.

What are you currently working on?
A strange horror/sci-fi/5G-conspiracy theory short film.​

Someone will always not like your stuff. So fuck it, just go for it.

What kind of work would you like to be doing in future?
I want to work with artists long-term on projects, or from an early stage. A more collaborative process where we build visuals alongside the music, making work that really has meaning and substance to it that’s in harmony with the music and the artist that made it.

What advice would you give someone entering your field?
I’d say just don’t wait around for anyone to give you anything or validate you, don’t lose sight of yourself or your ideas or what you want, and don’t compromise on your own taste or dreams because someone said they don’t like what you’ve done. Someone will always not like your stuff. So fuck it, just go for it. Find a way to make that short film or photo or low key music video. Don’t just think about it, do it.

Tell us something that we don’t know about you...
My elbows bend the wrong way.

When you’re not working, what do you like to spend time doing?
Is there a time where I’m not working? Ha ha. Honestly though, not much. I could lie and pretend to be a vastly multi-faceted person with loads of interesting talents and hobbies, but really I just like hanging out with mates and having a well deserved drink… and probably talking about work or fantasising about other mad projects. It's a vicious cycle.

Where did you go on your last holiday (or vacation)? And where would you love to visit?
This is a cruel and mean question. I can’t even remember anymore. I actually really want to go to and see the Newgrange passage tomb in Ireland. Don’t judge me, but I saw it on an episode of Ancient Aliens and it looks mad.

What are your favourite currently-running TV shows?
Is it uncool to say Below Deck? If so, I’ve also really enjoyed Euphoria and looking forward to the new Fargo.

What’s the best movie (or movies) you’ve seen recently?
I actually thought Promising Young Woman was really good! Loved how intentionally crap all the male characters were. I also recently watched Death Becomes Her which was completely mad but great.

What are your favourite music videos by other people in the past year?
Saweetie ft. Dojo Cat - Best Friend wins hands down. Also really like that short/music video Jordan Hemingway did with The Horrors, Lout.

Favourite music artist(s), and favourite gig(s) in the past year?
Trick question? Not really sure about new artists from this year… I've generally been in a weird nostalgia vortex music-wise. I guess it’s quite eclectic though, really enjoying Arthur, and Squid, and also had the new Celeste and Bicep albums on repeat. There’s this Sugababes ‘About you now’ cover by OTTO that I can’t turn off as well.

Favourite food and/or favourite restaurant(s)? And most comforting food whilst stuck in lockdown?
Wow, this is extensive... I’m a sucker for a cinnamon bun or anything cake or pastry based. And mash potato. Anything with mash potato. I can’t even remember what I ate over lockdown. Just an enormous amount of take out. Probably my body weight five times over in gyoza dumplings.

I don’t know who I am anymore - I actually enjoy running and lifting weights.

What’s your favourite political or charitable cause, and why?
I don’t know to be honest there’s so many people out there doing good things in a world full of people that do bad things. Don’t think its fair or if it works to have a favourite. The pandemics really shown where the genuine good is and it’s been really warming to see people banding together to help people, and the planet and on a humanitarian level. Anyone who fights an injustice has my vote + respect!

Best recent purchase (send photo, if poss)?
It’s a throw up between this book I just bought, and the coffee I’m drinking. Both are great and serve different purposes - see pic attached.

What’s the favourite/most rewarding part of your routine when you have to be in lockdown? Anything you’ve achieved in lockdown that you wouldn’t have done otherwise?
I exercise now! Honestly I don’t know who I am anymore - I actually enjoy running and lifting weights. I’ve also had a lot of free time that I’d usually spend travelling or out and about, so have had the opportunity to reconnect with other types of being creative… like painting and drawing (although most of them are painfully awful). I also finally wrote down the short horror film that’s been in my head for the past year, so that’s been really rewarding to actually get pen to paper.

• Joceleyn Anquetil is a director at Pulse Films. See her showreel at the Pulse website here.

Behind The Video: Ebeneza Blanche on Jae5's Dimension with Skepta and Rema - "I wanted to show the real Ghana."