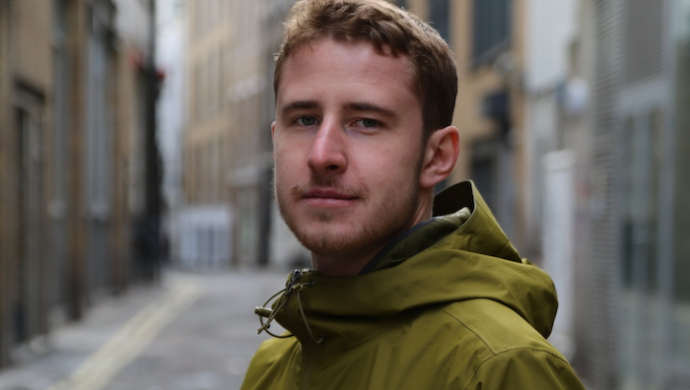 George Neave is a name to watch in the world of colour. Working at London post studio Coffee & TV, this up-and-coming colourist has broken through in music videos this year, grading promos for artists such as Headie One, Mahalia, No Rome and Sam Fender.

And when George is not working, he may be playing World of Warcraft Classic on his PC - or possibly thrashing someone at conkers in the pub...

Now 25, George comes from Farnham in Surrey, where he holds the jaw-dropping record of being the local pub conkers champion for four years in a row. "I hear people there still talk about it," he says. And he's probably not joking.

George then took a degree at Ravensbourne in South East London, studying Editing and Post Production. Such is the reputation of that institution, it proved to be an excellent move for when it came to getting a foothold in the industry. "I’m sometimes surprised at how many other Ravensbourne alumni I meet and collaborate with, throughout the industry," says George, who now lives in Brockley, South London.

How long have you been in your current position, how did you get the job?

I was working as a runner at The Mill, when one of the Flame ops, who knew I was interested in colour, said that a good friend of his was starting a colour department and was in need of an assistant. That person was the renowned visual effects artist Jon ‘Truss’ Trussler, one of Coffee & TV’s founding partners. I went for an interview and I got the job.

I did a lot of late nights, learning as much as I could about DaVinci Resolve in my own time. I would take a job that had been graded by a colourist, strip it back and then work up my own grade. I’d compare my final master with the colourist’s, then try to learn from that.

In the time I’ve been with Coffee & TV, the studio has doubled in size and we now have two fully kitted out colour grading suites. Simona Cristea joined as our Head of Colour two years ago and I’ve continued to learn loads from her, including new techniques and different ways to approach a grade. All the time building my own style too.

I'd highly recommend directors talk to their colourist before the shoot, with jobs where they want to create a specific look.

Which projects have been most significant for you in terms of gaining experience and helping your career?

I’m always learning and each job has a new lesson to be learnt. I don’t think I can name one single project but the particularly technically challenging jobs, are the ones I’ve tended to learn most from. Every single job is different and challenges me in different ways. And that’s what I love about this job.

Above: Sam Fender 'The Borders', graded by George Neave

What was the hardest job you’ve had?

Brother Leo was a job I did recently with the amazingly talented director Sasha Nathwani. This involved a few techniques that took a lot of time to achieve. There were two scenes where Sasha wanted to implement dynamic grades, changing all the green elements in the shot to purple.

Sasha took the time before the shoot to come and speak to me so we could discuss the best way to achieve the look. I keyed the greens in the shot, rotoscoped around the actors in the shot to stop any spill from my key falling onto them. This was time-consuming but well worth it for the finished look.

I think the fact that Sasha came to speak to me beforehand was incredibly helpful, and I would highly recommend directors to do the same with their colourist with any jobs where they want to create a specific look.

How important is colour grading to promos?

Alongside music, colour can be one of the most emotionally evocative tools for our senses. If the look and emotional feel of the imagery doesn’t match the music, it can really jar and pull you out of the immersive quality of the promo.

What was your biggest cockup?

Drink placement next to very expensive kit... It's a consideration you can learn the hard way.

What are your favourite music video-related jobs of the past year or so - between 3 and 5 different ones - and why?

Japanese House 'Maybe You’re the Reason' (dir: Harvey Pearson) - I was pleased with the very warm, soft and filmic look we developed.

Brother Leo 'Barcelona' (dir: Sashinski) - A technically challenging job that was incredibly satisfying to get right - see above.

Blossoms 'Your Girlfriend' (dir: James Slater) - I really enjoyed this job. I love a story-driven promo and there was a lot of fun, humour and practical make-up effects on this one.

What are your favourite other jobs of the past year or so?

Mini Clubman - A very cinematic car spot. I was offered quite a lot of freedom to develop a strong look for it.

You have to have a massive passion for visuals and a strong desire to succeed.

What kind of work would you like to be doing in future?

I love working on short form, and I hope to continue to work on bigger and bigger music promos and commercials. And possibly further down the road, if it was the right project, I’d be interested in grading long form, like drama or gritty docs.

What’s on your current To Do list at Work?

I’ve a few things I’d love to share but can’t mention yet, including an awesome short film shot on a combination of 8mm & 16mm shot by Neirin Jones.

What advice would you give someone entering your field?

You have to have a massive passion for visuals and a strong desire to succeed. Making it in this industry can be tough, especially as a colourist as there as so few out there. Along with passion and intelligence, you need dedication, hard work and a willingness to put in the extra hours.

When you’re not working, what do you like to spend time doing?

This job can be quite consuming but when I’m not working, I enjoy photography - mainly shooting on my 35mm Olympus 1. I’m also quite a big PC gamer.

What other things would like to be doing, but don’t have time for, or can’t afford?

I often thought about taking up a martial art. Kickboxing perhaps.

I thought 'Joker' was a great example of storytelling, acting, cinematography and a grading masterclass.

Cool stuff you love: what have you really enjoyed recently in media and culture?

FILM: I watched Joker a couple of weeks ago, which I thought is a great example of storytelling, acting, cinematography and a grading masterclass. Shot digitally but very filmic in its image quality. A must-see for anyone interested in filmmaking.

TV: I found the Netflix series Top Boy a joy to watch, mostly for the same reasons.

Uncool stuff you love: what are your guilty pleasures that you fall back on when you can’t consume 'cool stuff' any more?

I like to relax with a little PC gaming, which I guess isn’t all that cool. Having said that, how could having a level 44 Horde Warrior in WoW Classic not be cool?!

How could having a level 44 Horde Warrior in 'WoW Classic' not be cool?

What stuff out there do you think is overrated?

Best event or show or gig you’ve been to recently?

I went to Boomtown this summer, which was awesome. I’d say the best sets included The Streets and Gentleman’s Dub Club.

Favourite dish… I suppose I’m a bit like Garfield in so much as I always fancy a lasagna.
Favourite restaurant… Flat Iron in Covent Garden. Delicious.

Work/Life balance? You’ve got to have a solid life out of work!

How addicted are you to checking Instagram on your phone (out of 5)?

Pretty addicted I guess, possibly 4.5. It’s a great platform for visual practitioners, especially DoP’s and Colourists. If you’d like to find me, here’s my tag @georgeneavecolour

What’s on your To Do list for Life (Outside Work)?

Unfortunately at the moment it’s getting a wisdom tooth removed. On a more positive note though, it’s almost the start of the ski season and I’m planning a getaway with friends.

It’s good. I’d say at least a solid 4 right now. You’ve got to have a solid life out of work!

• In our new Q&A series Work & Life we ask professionals who are involved in music video production and post production about their work, and interests and their favourite things. This is created by Promonews and the company where the individual works, which comes as part of their banner sponsorship deal or as a sponsored article. If you want to find out more about the Work & Life series, get in touch with us.