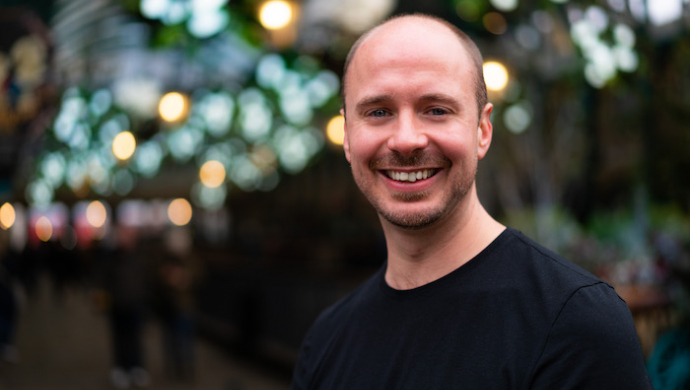 London-based editor Dave Warren has worked on some big commercials, for the likes of Apple and Ford. He has also edited a few music videos in his time, for the likes of Circa Waves, Eliza and the Bear and Temples. Now that Nomad Editing, his home for more than ten years, has a new office - including a new grading suite - he is making time to work on more music videos in 2020.

And when he is not working, turns out Dave can often be seen speeding around Kent, wearing lycra...

Promonews: How did you get into the industry?
Dave Warren: I actually started out wanting to be a Flame op. After graduating with a graphic design degree from Leeds, I joined Rushes and worked my way from runner to Flame assistant. I was always editing in my spare time though, and actually started up a small video production company with a friend, travelling around Europe at weekends, filming high-end hotels and cutting the videos in my room through the night.

I also worked as an assistant editor in Soho for Pete Lurie. Watching and learning from her is where I really fell in love with editing. She taught me the patience of organising and breaking down the footage, through to the magical process of creating the film from the elements.

What were some of your early experiences in the industry?
Sleepless nights. Trying to hold down a day job and working as an edit assist at night certainly led my coffee consumption to skyrocket. Once I decided to focus on editing things got a lot more enjoyable, and I just concentrated on trying to cut as much as I could.

After freelancing as an edit assist at Nomad for about a year I joined full time in 2008, and haven’t looked back since. I worked my way up to editor over the next few years. I've had the privilege to work in America a lot, and cutting on set in some of the famous stages in Hollywood was pretty inspiring. It made me realise how much of a little kid I still am. One time, I even got to ride around the film lot in the Ghostbusters car!

I always enjoy the technical aspects of editing with VFX in mind and working closely with the VFX magicians.

Which projects have been most significant for you in helping your career?
The first time I was sent to LA to cut an iPod spot on my own as the editor. I think I grew up super fast over that week not having the protection and support of working under a senior editor. A real sink or swim moment!

What are your favourite jobs in the last year or so?
I really enjoyed working on the Scottish Rail commercial Better In The Making [directed by Richard Paris Wilson, above]. It was a big VFX job and I always enjoy the technical aspects of editing with VFX in mind and working closely with the VFX magicians. It always hammers home how important the team ethos is in our industry. I’ve cut a couple of short films and currently working on a documentary. I love to try and work on a variety of jobs. New challenges and all that!

A music video is an opportunity to experiment, think creatively around potential issues and collaborate with the director to realise their vision.

Why are you interested in getting back into music videos?
What’s great about music videos is that there is generally a lot more freedom in terms of creativity. It’s a great opportunity to experiment, think creatively around potential issues and collaborate with the director to realise their vision. The ability to work with and support up and coming directors who want to explore new techniques and fresh ideas is what is drawing me back to promos.

And why now?
I want to immerse myself back into the music video scene now that I am in a position to give it the time it deserves. Nomad London’s recent expansion to offer grade alongside our existing VFX, GRFX and editorial departments, as well as our move to a new office space has meant that we now have the opportunity to work with new clients, and I’d love to get stuck into to some exciting projects.

Why do you think music videos are so important in the industry?
The music video industry and its raw and passionate approach to creative filmmaking still influences the media industry as a whole by discovering new talent and creating new ideas and techniques. That is what I believe drives the industry forward after all. Events like the UKMVAs a few weeks ago are brilliant, not only to surround yourself with hugely talented people, but also to take time to acknowledge and praise the brilliant work that people have made. This industry is relationship-based and getting out there and meeting new people with fresh ideas that challenge and excite you is what its all about.

When you’re not working, what do you like to spend time doing?
I am a complete cycle nut. When I’m not in the edit bay you can generally find me racing around the Kent countryside with the other lycra-clad Wiggo wannabes.

I guess my ultimate bucket list would be to climb Mount Everest.

What are your all-time favourite videos?
Where to begin! There are so many greats, from Gondry’s Fell In Love with a Girl for the White Stripes to Spike Jonze’s Praise You for Fatboy Slim. Both so different but amazing.

One director I have always admired is Chris Cunningham. His music video for Bjork's All is Full of Love [below] has to be a standout video for me. I remember being blown away by when it came out in 1999 and I think it still holds up now.

Chris Cunningham's video for Bjork's All is Full of Love has to be a standout video for me.

Was there a particular video and director that stood out to you this year?

For me the stand out video of the UKMVAs was FKA Twigs' Cellophane [below]. It was just another level of beauty.

Cool stuff you love: what have you really enjoyed recently?

The recent Lucian Freud exhibition at the RA was amazing. I originally studied Fine Art, specifically Francis Bacon and his contemporaries, so obviously I was first in line for that one.

I’ve just finished reading The White Spider by Heinrich Harrer [1959], which describes the first successful ascent of the north face of the Eiger in the Swiss Alps. It's both terrifying and incredible.

I've just finished reading The White Spider about the first successful ascent of The Eiger - terrifying and incredible.

What other things would like to be doing, but don’t have time for, or can’t afford, yet...?

Being a keen cyclist I have a never-ending cycling bucket list, but that’s boring. I guess my ultimate bucket list would be to climb Mount Everest. I’ve stood on base camp and stared at the summit. There definitely is a desire to stand on the top of the world one day. I haven’t told my wife about this yet…

• This is a co-production by Promonews and Nomad Editing

Behind The Video: Sam Pilling on DJ Shadow's Rocket Fuel