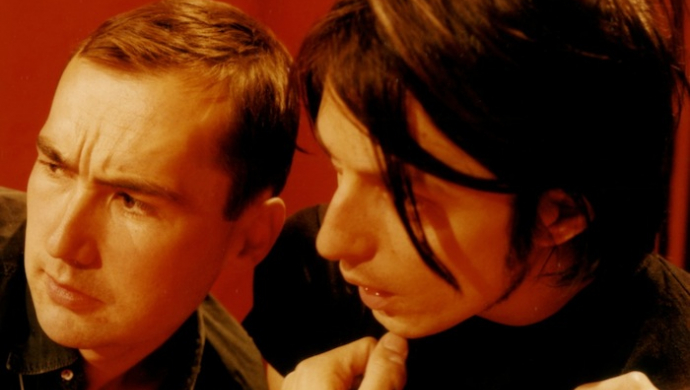 In the second half of our extensive interview with WIZ, on the event of his return to music videos for Will Young's Like A River, he talks about his breakthrough as a director with the 18 minute long classic 'music film' Weekender, about his relationship with legendary Polish director Krzysztof Kieślowski, and about what the future holds... (Above: WIZ, right, with DoP Daniel Landin, on Therapy? shoot in Sept 1995 Photo: Simone White)

Promo News: What were things like in 1992 when you made Weekender? How did you manage to turn it into an 18 minute short?

WIZ: I was blessed to be very young in the epicenter of the Acid House revolution. What that means is, you are permanently, at a tender age, getting a really deep and profound glimpse of the possibilities of youth, of change, of the future, of possibility. In a way that never leaves you.

So as a filmmaker I had a real deep need to convey my little story, my experience of this extraordinary underground movement that was spreading unstoppably across the country. I was zealous with a mission. And when you’re motivated like that, it can be very a very powerful force and it's very contagious. I was fortunate to be introduced to Flowered Up, the band who made the song Weekender. It was 12 minutes long, and they had a visionary record label boss, Jeff Barrett. He said ‘we’re not gonna do a cutdown of this song, we’re gonna release it as 12 minutes long. We’re not gonna compromise and likewise with the video we’re gonna do something similar.’

So, I said ‘This is wonderful, you’ve come to the right place. This is a story I've wanted to tell, and the song Weekender is such a cinematic piece in itself and really lends itself to a longform video’. So we created this film and by the end it was 18 minutes long. At the time it was hugely - it's not me saying this - other people say that it was hugely innovative and groundbreaking and very influential. Danny Boyle will be the first to say it was a huge influence on Trainspotting.

"I think what gives Weekender its longevity is that it isn’t just a celebration of that time. It's actually holding a mirror up to it and questioning it."

It was a very exciting time but I think what gives Weekender its longevity is that it isn’t just a celebration of that time. It's actually holding a mirror up to it and questioning it. That's a very important aspect to it. There's great thrills, there's a great journey to experience but its investigative. There’s some substance and some layers to it which could resonate to every generation really.

PN: On your Vimeo page you reveal that you were handpicked to train under Krzysztof Kieślowski. How and when did that come about, and how would you describe the experience? And what was the most important thing you learned from him?

WIZ: In ‘94 there was a thing in Screen International inviting directors to apply for this summer course in Amsterdam, a masterclass to be given by Krzysztof Kieślowski. To qualify you have to have had directed a feature film, which I hadn’t done. But I was a massive fan - not least his Decalogue series - and he had released Three Colours: Blue and Three Colours: White at that point. So anyway I wrote and sent this very impassioned letter, along with Weekender and some other work, and crossed my fingers and kind of forgot about it.

Then a few months later, I got a letter saying Krzysztof Kieślowski was inviting me to be part of the summer course. And as I'm sure you can imagine it was an extraordinary, seminal experience for me. And since then, he’s always with me. Without sounding romantic or pretentious, we actually really bonded and he taught me many things – not least the importance of vodka in the creative process. But as well, the biggest thing he taught me was that the three most important things in filmmaking are: casting, casting and casting.

But as importantly, he had a real sensitivity and taught us how fundamental sensitivity is. He told me, when you’re on set you want to have - if possible - nothing between you and what you’re shooting, between you and your cast. The best place for you to be as a director is to be sitting below the lens. The top of your head should be touching the bottom of the lens. Forget monitors, forget about anything that gets in the way of you and what you’re filming. You want to be there, seeing it as viscerally and as closely… you want to be able to smell what's going on.

Especially these days there's so much technology and accepted ways of shooting that gets in the way of that. I’ve seen directors that might as well be in another country in their kind of relationship and closeness to what’s being filmed. I think that shows in a lot of work that there’s a lack of human presence. Which, of course, is what we want to see and feel when we go watch a film. We want to feel human presence. And that will never change.

PN: Down the years in numerous videos you’ve shown a fascination for stories of political upheaval – often with individuals facing up to dictatorship, in the midst of riot and revolution.  What drove you to tell these stories?

WIZ: Well certainly a big influence would be my formative experiences with authority at school. Those times stay with you, mark you. I was a witness and a victim of what I felt was grave injustice. So that affected me. But in parallel, my school days weren’t all traumatic. I was lucky to have a great Art teacher and a great English teacher. I was exposed to the importance of telling stories and the importance of looking for the beauty in things. So that could be a reason why I’m interested in those themes.

I think, work is always about the individual standing up against the Goliath. It's always about challenging the accepted norms and that's a lot of what my work tends to be at its base. You could say that’s what is the essence of being young, of youth culture, of finding one’s identity. And a sense of humour is important as well. That’s another powerful defence mechanism. To me, comedy directors are the real directors, they’re the great directors. But I wouldn’t pretend to have any of those great skills...

"I think, work is always about the individual standing up against the Goliath. It's always about challenging the accepted norms and that's a lot of what my work tends to be at its base."

That’s why Stanley Kubrick is one of the greats, because to my mind he’s one of the greatest comedy directors, albeit with black humour but all his work has a comedic aspect underneath. It's a very rich vein running through all his work. Clockwork Orange, The Shining, obviously Dr Strangelove. There's a truly sublime sense of transporting dark humour, and that's what makes it so rich. Whereas perhaps certain very successful Hollywood directors are wonderfully technical and are brilliant filmmakers, but there's a lack of that extra dimension in their work which I think you need.

WIZ and Rosario Dawson on set of Out Of Control video, Mexico City 1999

PN: You’re working on a number of other projects – can you tell us more about them?

One thing I wanted to touch on, going back to your question about being away for a year, I just want to say that having re-entered the fray I am looking forward to making some more music films, not least with the Will Young project being a success, I am very excited to come back and work on projects. I did a lot of travelling last year on my own which is an experience I hadn’t done in a long time. Its very special travelling on your own. You’re exposed to things that you aren’t when you’re travelling with other people. Consequently I have a great hunger to start telling stories again.

And another thing, going back to the question about my work and the current climate of pop music video and where it is creatively, perhaps it isn’t the most exciting time right now. But I think there is a real undercurrent of frustration and disaffection and I do think that there will be some cultural shift, and that it will be political. I’m looking forward to that, and I’m excited about that. It's the calm before the storm.

Following up the lo-fi promo for Ride The Dragon, Aidan Zamiri and FKA twigs keep up the pace with the next visual for the new Caprisongs mixtape, for Meta Angel.

Stink Films have announced that Andzej Gavriss, who directed the acclaimed and award-winning videos for Aigel's You're Born and Sansara's We Will Become Better, has joined the commercial and …

To mark the release of her new album The Gods We Can Touch, artist Aurora and director Alexandra Green present an ethereal, experimental live experience.