WIZ: "Being an artist is about confronting the dark side" 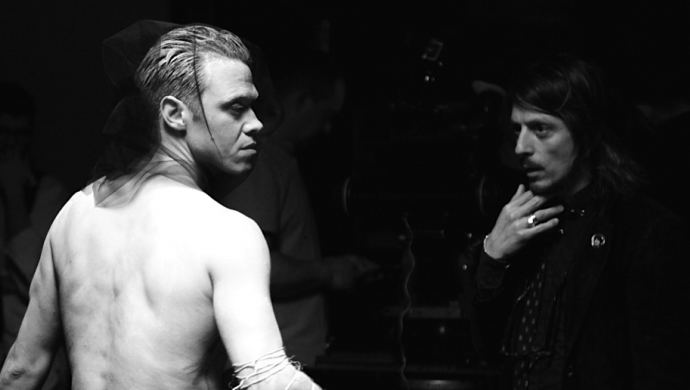 He's one of Britain's foremost music video directors with a career that intersects with the great movements of British music in the past two decades - from acid house to pop. With the influential Weekender in the early 90s, and then making videos for Oasis, Marilyn Manson, Manic Street Preachers, Chemical Brothers, Kasabian and many others, WIZ has been one of the great practitioners and advocates for music video as a popular artform.

Recently he's been quiet on the music video front, not making a promo for over a year. But now he's back with his latest collaboration with Will Young, for Like A River. It seemed like a good time to ask WIZ a few questions – about the past, present and future of his career in music film. It was an intriguing conversation – and we're presenting it in two parts. In the first half, he talks about his return to making pop promos with Will Young, and their version of the Theseus and the Minotaur myth - and also his 'frightening' step away from being repped by a production company last year.

PROMONEWS: You’ve now made three videos with Will Young, who would seem to be an unlikely collaborator in some ways, but you work very well together. What’s the key to your working relationship?

WIZ: I actually think that within the context of pop music he is actually a very radical artist, and perhaps is more rock and roll, shall we say, than a lot of artists that appear to be, or have the profile of being rock and roll. He resisted the mould that he was being preened to fit into, and has always been his own man.

From the beginning he came out with his sexuality – arguably a very dangerous thing to do, especially 10 years ago. In fact it was wise as well as brave, and established him as more than an ephemeral pop star. So for me, he’s someone who I find very stimulating and very exciting to work with – as much as, say, Marilyn Manson. In his own way he's just as radical and iconoclastic. So that's where the attraction comes.

As for the key to our working relationship, it's largely to do with our mutual respect. I think great pop artists usually are great video artists. And great video artists in my experience, are artists who find directors that they feel a kinship with, and let that director do their thing. Rather than trying to micromanage it, which usually is counterproductive. Will is someone who has the self-confidence and self-awareness to enable a director to come in and interpret his song and interpret him, so there's a purity of vision and that's when you get great work.

"Will is someone who I find very stimulating and very exciting to work with – as much as, say, Marilyn Manson. In his own way he's just as radical and iconoclastic."

Once you've done that once, the next important thing in a working relationship is trust and a shared language which accumulates every time you do a project together. This most recent video that we’ve done was one of the most rewarding - not easy, but smooth in terms of the pre production, the shooting and the post production. Because there was the shared language, there was great transparency, there was just a mutual trust. And the way everyone knew where we were and it made for - I’d like to think - conditions for producing an interesting film.

PN: So you think transparency is essential to producing good work?

WIZ: Yes, absolutely. Of course it's not just Will. It stems from him, but also about the people around him, his management, feeling that the artist is excited and confident about the project, and then responding in kind to my producer. The next thing, of course, is the commissioner, and on this job, I have to say that Tamara [Brooks] was a commissioner who had a real sense of the vision of the piece. She had the foresight and the overview to allow that creative collaboration to unfold without hindering it.

It was a joy to have those important relationships in the production all on the same page, all working towards the same goal. And of course then there's a ripple effect with your crew and the cast. This shoot was one of the most positive and hardworking shoots I've done for a long time. Everyone was so locked into what we were doing, the focus was razor-sharp and we achieved a lot.

These are obvious things, but believe me, they’re not always there, and they're so important. Particularly these days when the budgets are smaller so you have less time to shoot, less pre-production run up time. So it's really important that the time you do have is used very effectively and efficiently...

There's many reasons why the record industry has changed beyond recognition over the last 15 years – some good, some not good. Consequently budgets are shrinking, and that's how it is. But what is a great shame is the reduction in pre-production time, run-up time. That is something that I do despair about, it's one thing not having much money but it doesn’t equate with not having any time. There’s a finite point that you can squeeze production, so you know, the more everyone knows what they’re doing the better the work’s gonna be under the circumstances.

PN: What was the reason for recreating the Theseus and the Minotaur myth? What did you (and Will) want to bring to it that was different than previous interpretations?

WIZ: Good question. You don’t have to be a Jungian or a Freudian professor to see a metaphor in that story, it being a confrontation of one’s dark side – the id. Of course it's a timeless theme in art as well as human psychology, and equally, to go back to your first question, if we’re talking about rock n' roll themes, it's the notion of ‘walking with the beast’, and the creative muse that the beast or the devil may be. To me, if you’re an artist it's not just about, y’know, taking drugs and turning it up loud. That can be part of it, but it's also about challenging the norm. It's about confronting the dark side, and that is something which we largely avoid doing.

"Budgets are shrinking, and that's how it is. But what is a great shame is the reduction in pre-production time, run-up time. That is something that I do despair about."

With this music film, I heard the song – a wonderful song – which has this incredible tension and melancholy. The lyrics evoke a sense of facing a reality, facing an uncomfortable truth, and Theseus and Minotaur myth came to mind. It seemed to be a great foundation for the idea, and Will really responded to that. It appealed to both of us, because it's a really timeless and enduring story, and it was a challenge to give our contemporary spin on it. In the original story he slays the beast, but in our film there's a level of ambiguity of whether Will’s character slays the beast, or if he embraces the dark side. That was our take on it.

PN: It's your first video in a while. Apart from budgets generally getting smaller, does making the videos you want to make become more difficult than ‘back in the day’? Are there fewer artists open to big ideas?

WIZ: Yes, it is my first video in a while. Last year, for the first time in my humble career, I decided to take a step back from music videos and chose to not be at a production company for the first time ever. I wanted to break that umbilical cord. Initially it was very frightening to step out of that comfort zone, but I had come to a point in my career where I really needed to take a step away and go on some journeys myself. It’s very hard to do that when you’re getting tracks landing on your desk every day, because there's always a great project to do.

"If you’re an artist it's not just about taking drugs and turning it up loud. It's also about challenging the norm."

So the only way I could stop that happening was to literally cut myself off. As I say, initially it was quite frightening but after a while it was very liberating. For the first time in 15-20 years my mind entered a new creative zone, without thinking ‘Oh, this would be a great video to do’, or ‘Oh, that would be a great project’. To see the bigger picture I needed to step away. So that's another reason why it's so great to come back and have a great experience with this project. That's really renewed my faith in our industry and music video. Of course it's possible to do great work, if you want to. It is more challenging with smaller budgets, but sometimes, to a degree, that can be really good.

As far as artists being interested in big ideas, I think, there's definitely a climate, a will to do ‘’big ideas’’ that is less. But I try to be optimistic and positive in that things will change. Experience tells us that things to come around and something will come along that will open things up again and there will be a thirst to do more creative work. Of course there is creative work being done but… it ultimately stems from music.

"In the original story he slays the beast, but in our film there's a level of ambiguity of whether Will’s character slays the beast or if he embraces the dark side."

Culture is so different I don't think pop music is the principal, fundamental expression of young people anymore. There's other things now that didn't exist ten years ago, such as, obviously, social media. People have so much more opportunity to express themselves online and on social media than 10-20 years ago, so young people's energy and excitement is not just on pop music anymore. Before, pop stars would go for identity, emotion and style, but there’s so many other places to go for that now. Probably that's why, in the last year or so, there’s been a lot of talk about a lack of charisma in our pop stars and maybe that's because the demand for originals and real idols is not as strong. And there's a parallel with our politicians…

Equally in the same breath, I’d say music is unique in its role in people’s lives and that will never be replaced. Its a profound aspect of peoples lives, that will always touch us in a way that nothing else does.

PN: Your subject matter has included sex, drugs, rock n roll (obviously) and revolution. Does the new Will Young video, exploring a classic myth, mark a new area of interest for you?

WIZ: The minotaur myth is completely about sex, drugs and rock n roll, and revolting against the established order of things. So it feels very natural. Creatively and aesthetically what was really exciting was to really strip it down to this very minimal art direction and filmmaking… there’s nothing extravagant or baroque or ostentatious about it. It's really stripped down to its bare minimum ingredients. But as I say, to me it's very much a next stage in a very natural progression of my work.

The Weeknd heralds his new album Dawn FM with a spectacular and nightmarish promo from Matilda Finn.