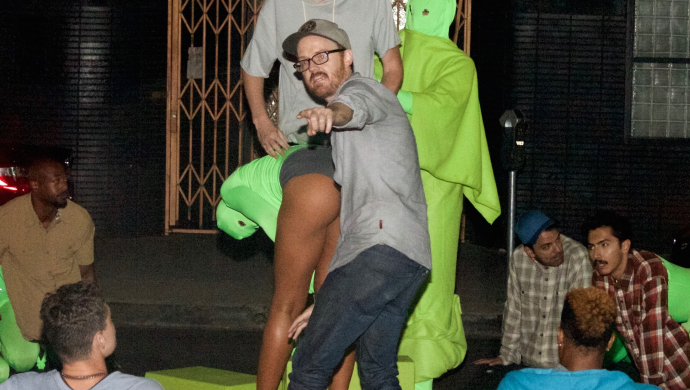 Keith Schofield is playing with your head. He has done this many times before, of course, as with Darwin Deez's You Can't Be My Girl (Darwin inside some cheesy stock footage films), and the notorious Duck Sauce's Big Bad Wolf (genitalia replaced by human heads). But the video for Stylo G and Jacob Plant's Bike Engine seems to come from a whole new realm of meta.

It starts out as a characteristically outrageous Schofield scenario: a pair of female legs with no upper half becomes the target of a group of men with no legs. Then it goes somewhere else: women protest online about the video's content, then in person, and it turns out they have no legs either. Finally, it seems to gets personal: Schofield himself appears directing the video, and ultimately haunted by the online reaction to the video. Confused? You obviously haven't seen it yet.

So we got in touch with Keith to find out all about how the Bike Engine video came together.

PROMONEWS: How did you come up with the idea? Did the YouTube reaction to one of your previous videos inspire this one?

Keith Schofield: My last video had a bit of a slow burn and I think a lot of audiences tuned out before the funny came in. So this time, I was determined to try to hook the audience in from the very beginning. Even though the first 20 seconds is clichéd, there’s still a great ass. Eventually I arrived at the Torso-less Ass and Half-Bros; and then the riding scene, and kind of stopped. I kept thinking about how I’d sort of already done this video before, and what would people think - and it just took off from there.

"I’ve gone for high concepts and gimmicks. Nothing was personal, nothing was revealing. It took me a while to actually realize this."

Also, credit to BUG for doing the live reads of YouTube comments. They’ve really cemented the idea that music videos continue to live and grow as part of an ongoing conversation, rather than as these self-contained finished products.

Is there a serious point here about it becoming more difficult to create comedy that may offend? And when did you decide to cast yourself in the video?

Since I’ve began doing music videos, I’ve always approached it from the perspective of what will reach an audience. Often I would be working with bands without huge followings, so the only way to get the work seen is if it somehow transcended the fanbase. So I’ve gone for high concepts and gimmicks, always in the name of going viral. But in the process, "IVe. Nothing was personal, nothing was revealing. It took me a while to actually realize this. And so I was drawn to the idea of putting myself into the video.

Of course, because I think in gimmicks, I came to the conclusion to that the best way to do that was to literally put myself in the video and show all of my insecurities on screen. And maintain a little bit of ironic detachment. One step at a time, I suppose.

"I came to the conclusion to that the best thing was to literally put myself in the video and show all of my insecurities on screen."

Was it easy to get people on board with the idea?

My treatment was basically a beat-for-beat version of the final product; and they were on board from the beginning. It was one of those jobs where we had to pull a ton of favours so I’m not sure it would have happened if they had any inclination to try and steer it into another direction.

We have a glimpse of the green screen legs giving away how it's done [in fact it's more complicated than that; the actors wear fake torsos that hang around their necks] What was the trickiest aspect for making this work?

We struggled trying to figure out the dancing scene. We finally came upon a solution involving a crewmember dressed completely in green holding the actor by his waist and then allowing him to fall off.

However, once we got to set, the crewmember wasn’t wearing a proper green screen suit, but rather a disturbing mishmash of leftover green cloth. We called him Green Ku Klux Klansman. He is the stuff of nightmares.

Were you worried that people would react badly to the video? Have you been reading the YouTube comments? Any surprises?

A lot of people have left nasty comments on YouTube, but I simply assume they’re playing along with the characters in the video. And if they leave a nice comment, then that means they like the video. I can’t lose!

"A lot of people have left nasty comments on YouTube but I simply assume they’re playing along."

Yousef and Paloma Faith join forces in this modern twist on the Frankenstein story, in the …

Wons Phreely self-directs the wonderfully eccentric promo for The Night Has An Alibi.