UK Music Video Awards 2017: Newcomer Awards winners of 2016 on what they have done in the past year 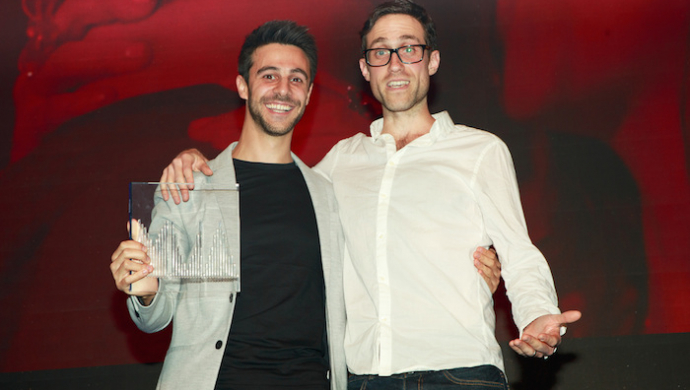 Last year’s UK Music Video Awards saw the introduction of a new set of awards aimed squarely at up-and-coming directors who were creating music promos on a budget. Backed by mobile network, giffgaff, the five Newcomer awards attracted a huge range of creative work from undiscovered talent made for under £5,000 (or the equivalent in local currency).

The eventual winners were a sweet choreographed love story for Will Joseph Cook by Rafe Jennings, an explosive portrait of childhood unruliness for Honeyblood by Thomas James, a cinematic tour de force by Michael Leblanc for alt-rockers Holy Fuck, an unsettling puppet horror tale for Jesse James Solomon by Noah Lee and a trippy tale of raver-love for Beardyman by Lewis Rose (both pictured above at the UKMVAs16 ceremony).

Ahead of the entry deadline for this year’s Newcomer Awards - the deadline for entries is next Wednesday August 2nd – we caught up with last year’s winners to find out what they had been up to since collecting their honours at the Roundhouse last October.

It turns out that their output since then has been remarkably diverse. It's spanned music videos, short films, live music, advertising, branded content, even features. And there's much more still to come.

Director Rafe Jennings initially won the chance to work with Warner-signing Will Joseph Cook through a brief on Radar for the track Girls Like Me. He followed up with a second video for the artist for Sweet Dreamer. And when he submitted another pitch through Radar, his most ambitious yet, for Take Me Dancing, Will snapped it up.

A nomination at the Radar Awards last July gave Rafe the confidence to enter the video into the UKMVAs, and his triumph in the Best Pop Video – Newcomer category gave him a new level of recognition. He signed with director’s rep Chloe Page at Lock It In, and with her help he’s been working on a number of music video projects. Among them were a dance-based video for Rhys Lewis’ Living In the City (below), and a performance video for The Magic Gang in Brighton.

More recently Rafe has been working with emerging artist Rebecca Dancer, on a promo filmed with a body rig, which will be out soon. Looking ahead, he says: "I'm excited about an upcoming comedy short and a campaign video for a car brand to be filmed in the autumn."

Another director on the Lock It In roster, Michael Leblanc, was exploring solo directing after a stint with co-director Scott Cudmore when he won the chance to shoot an epic video for Canadian alt-rock band, Holy Fuck in Romania.

Unable to attend the Awards last October due to his shooting schedule, Michael sent a heartfelt video message thanking his crew on the Romanian shoot. He went on the following month to direct a huge ensemble dance video for Wintersleep’s Spirit which won him nominations for Best Director and Best Alt Rock Video at the Canadian MMVAs in 2017.

The following month he wrote and co-directed his first feature length film, Tenzin, about the Tibetan community in Toronto. More recently he’s directed his first solo feature length film, Homme Movie, entirely on Super 8. Not surprisingly this double-dip into low budget features has been keeing him busy ever since. "The only exciting projects on my plate at the moment are my two movies, which we'll be editing over the next 3 months!" he tells us.

London-born, LA-based director Noah Lee took the Newcomer Video Urban award in 2016 with his music video for UK rapper Jesse James Solomon’s YPT. Noah's influence echoes both the "video store" generation of the 90's and the New Wave French and American filmmakers of the 1960's and 70's.

In 2015 his first short film was nominated for the Grand Jury Prize at AFI FEST. Signed to international production company Pulse Films, Noah’s previous ventures in music video included two promos for Rejjie Snow. But it was the beautiful but unsettling YPT which won the judges’ attention.

Earlier this year saw the release of Noah’s latest music video for Sonder’s Too Fast (above). A surreal depiction of a boy exploring his own domain, the dream-like visuals set in the Californian desert show the main character’s birth, life, death and then re-birth, with a parallel between the visuals and the sounds that echoes the parallel between the lead characters younger and older self.

Thomas James was already building a strong reputation for visually-creative music videos for artists including Fat White Family, Oh Wonder and Loom when Black Dog Films put his work forward for the Best Rock/Indie Newcomer video award. His clip for Honeyblood’s Ready For The Magic saw him working in close collaboration with Honeyblood to face the twin challenges of directing the band and a cast of child actors in rural Scotland for a video which, as he explains, explores the explosive nature of infatuation.

Since last October, Thomas has directed two music videos for Nothing But Thieves: Amsterdam (below) and the just-released Sorry, both big-scale projects shot in the Ukraine.

He’s also directed Bliss, a short film featuring Steve Oram, the full version of which is going to be ready in the next month. Right now, Thomas is working on a series of short films, called Tender Omens, to be exhibited as part of a solo exhibition in October. The coming months will also see him focus on bigger budget music videos, advertising work and branded content. His directing career is properly up and running.

Finally, we caught up with Lewis Rose, director of the Newcomer Best Dance Video for ‘Mountainside’ by Beardyman, in the middle of a hectic filming schedule. At the end of last year Lewis spent a couple of months touring film festivals - and scooping up lots more awards – with his short film The Chop, a comedy about a cocky kosher butcher who ends up working in a Muslim halal butchers. "It’s has been going down great," says Lewis. "I've also been doing lots of fiction writing... and of course, working on some great music videos."

Lewis returned to videos earlier this year to make a clip for Joe Goddard of Hot Chip’s Home, a half live-action, half-animated piece which Lewis achieved working in collaboration with celebrated illustrator, Pete Fowler.

As if that wasn’t enough, Lewis has just finished writing his first feature film. “It's very much mixing the worlds of music and comedy, like my Mountainside video," he says. "It's about a kid from a small mountain town in Snowdonia, who dreams of being a superstar DJ. We'll be putting the wheels in motion for production later this year. Should have a banging soundtrack!”

And he continues to collaborate with Beardyman, both on live performances, and in narrative sketch writing. "That has been really fun - we always come up with awesome weird shit," says Lewis. "We should be doing another video later this year too so keep your eyes peeled for that!"

Like his fellow 2016 winners, the UKMVAs Newcomer award win has acted as a launchpad for Lewis Rose. And there is still time for the next wave of directors to enter the Best Video Newcomer Awards at the UK Music Video Awards this year.

To qualify, your video must have been made between 1st August 2016 and 31st July 2017 for a budget of £5k or less. To find out more visit the UKMVAs website. You can sign up to receive more information about the Awards at info@ukmva.com.

There are over 30 awards to enter at this year's UK Music Video Awards - check out all the categories. The entry deadline is next Wednesday, August 2nd. This year's UKMVAs takes place at the legendary Roundhouse in London on October 26th.

Q&A: Zhang + Knight on creating dystopias, and working in China

Henry Scholfield took top honours on the biggest night of the year for music videos, winning Best Director and Video of the Year for his video for Stormzy's Vossi Bop at the UK Music Video …

You can now watch highlights of the biggest night of the year for music videos, and see many of the winners talking about their work, right after collecting their awards, on the UKMVAs YouTube …