Travis's Fran Healy on his Everything At Once film: "I prefer being behind the camera" 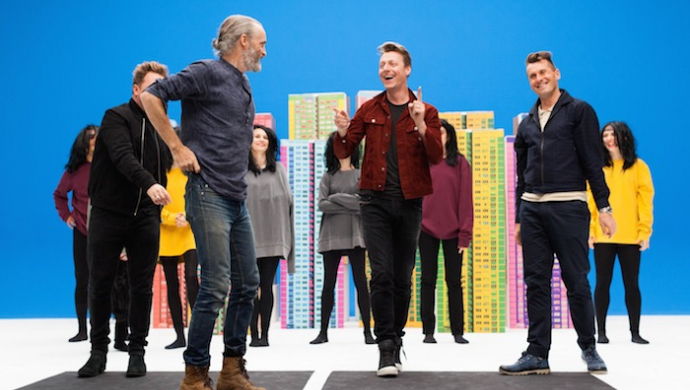 In a career spanning twenty-plus years, and after working with numerous top music video directors – including Anton Corbijn, John Hardwick and Dayton/Faris, to name a few – Travis frontman Fran Healy started directing videos for his band to promote their last album. Now he's gone much further, helming what is arguably the band's most ambitious project to date - and moving into Beyoncé and Florence territory.

Travis's new album Everything At Once comes with a longform film, consisting of videos for most of the songs on the record, entirely directed by Healy, and mostly shot in Berlin, where he has lived for the past few years. Incorporating a range of styles, but with a predominantly upbeat, even wacky sensibility, Healy has recruited friends like actor Daniel Brühl, and directors Tom Twyker and Wolfgang Becker for on-screen contributions and advice.

Having released the videos for the songs Everything At Once, 3 Miles High, Magnificent Time prior to the album's release, the whole film is available with the Deluxe version of the album. And as Fran Healy explains to us, it was a labour of love that involved him in being involved in some unlikely scenarios, including scavenging around his adopted city for large amounts of cardboard, to say nothing about being carried, with his bandmates, by strongmen in cradles. But it also saw him, he says, capture the true spirit of his band, perhaps for the first time on film.

Promo News: Without giving too much away, something happens in the first section of the film, which sort of explains what happens in the individual videos. Was the enveloping concept something you had at the start of the process?

Fran Healy: I think it's okay to give it away. My drink gets spiked [in a nightclub] and off I go on a trip which includes the band and the music and some other characters. I had to think of a device which would allow me as much scope to do anything...

Did you feel there was a commercial imperative, in our digital times, to do a video for all or nearly all the tracks on the album, or was it primarily a creative decision?

The one thing about Travis is there has never been a dominating commercial objective. It's a surprise we made it big when we did, because The Man Who went very much the grain of what was on radio at the time. We have never tried to fit. We would rather concentrate on finding new melodies which we haven't heard before and allow them to lead us where they will. When we met our record company they said we had 8 singles, so I figured it would be wise to cover all bases visually which led to the idea of doing it all at once... I had just seen the German movie Victoria, which they shot in one continuous take, and the Argentinian film Wild Tales which presented six (I think) vignettes about revenge. I thought if Sebastian Schipper [the director of Victoria] can hold me on a single take for two hours anything is possible.

"We somehow managed to capture an elusive thing we have never been able to capture before."

Now you are directing your own videos, does it work in the same way as when someone else is directing them? Namely, do you wait until a track is done before thinking about the video, or do the ideas come earlier, like when you’re writing or recording?

The ideas came at the point just after I suggested we attempt to make the moving album. Songs always begin and end with the melody for me so I had no idea we would do this project when we were writing and recording. I understand the band better than anyone and maybe because of this we somehow managed to capture an elusive thing we have never been able to capture before. You would usually only ever see this thing when we play shows but on this film it's there. It comes off the screen. It was accidental. Had we aimed to capture this we'd never have been able to.

How long did it take to make the videos, in what order did you make them?

We shot the nightclub (1) and the Animals video (3) in one day and Magnificent Time (2) and All Of The Places (5) the next day. Everything At Once (4) was a morning in Cornwall and a morning at ZDF studios in Berlin over two days. 3 Miles High was one day in my neighbourhood. Idlewild was one very cold evening minus 14 degrees in Spandau Altstadt.

How did you get Daniel Brühl to appear in the Everything At Once video, and get him to play a creepy children’s TV host?

Danny is my friend. We have known each other for seven years. We live in the same neighbourhood in Berlin, and when I had the idea for this video and needed someone to play a sleazy Saturday morning kids TV show host, he was the first guy I thought of... haha!

"It took me a while to cast these guys. I had to trawl the Strongest Man world through Facebook..."

Who are the bodybuilder guys in the 3 Miles High video, and where did that idea come from?

Rob Frampton, Mark Felix, Terry Hollands and Tom Stoltman. It took me a while to cast these guys. I had to trawl the Strongest Man world through Facebook and other internet tools. I eventually got in touch with Denny Felix, the wife of Mark Felix, and she was amazing as she knew all of the UK guys and then she pretty much picked out all the guys she felt would be perfect.

For Magnificent Time you moved into a studio, and it’s a rather theatrical idea, which is quite unusual for Travis. Where did you shoot it? And your cardboard city - which I initially thought was digital - who made that?

We shot it in Cinegate in Charlottenburg in Berlin. I had managed to get the "cardboard king" of Berlin involved. He could construct anything out of card and is amazing. It was a major coup to get him. Then a week before we shot, he called and pulled out so I had to make everything myself. It was a lot of work as I had to build 24 buildings and build a cardboard car. I drove all over Berlin, going round the back of Ikea and their equivalent of Homebase scavenging cardboard before the bin men came. Literally standing in skips trying to find matching cuts. It took fucking ages.

While doing this I passed a highrise building lit by beautiful sunset light and snapped it. Back in my room I photoshopped the shit out of it and created all the facades which I printed at my local printer. I ended up finding Cardboard Valhalla in the shape of a place outside the city called Cardboard Konig (Cardboard King). It was a big moment...  and I bought 72 PC boxes which I then constructed, and then packing taped the facades to them.

I'm glad you thought it was computer generated. That is the ultimate compliment. It was cool when I saw it on camera. Very satisfying. People were wowing around the monitor. A very funny video to make.

How much are you enjoying being behind as well as in front of camera? And how has living and working in Berlin – which is almost like another star of the film – helped in your development as a filmmaker?

I prefer being behind the camera. Living in Berlin has been massively inspirational. I became friends with Wolfgang Becker and Tom Tykwer. It was Tom's wife Marie who said a couple of years ago, when I said I wanted to go to film school, not to waste my time and just make a movie. "All you need is a great producer, a great DP, and a great 1st AD and have a clear vision". Wolfgang is one of the most inspirational people I have met. His knowledge of film and music and pretty much all culture is unsurpassed by anyone I have met. He was very proud of me at the Berlin premiere.

"For some reason this album is very positive and I wonder if this is because the world is fucked..."

There’s definitely a feelgood, even goofy vibe in the videos themselves – or certainly the ones that have been released so far. Is that a reflection of where you’re at, and where’s the band is at?

Yes. I love to make people laugh and I love when people make me laugh. I spend my time on a stage watching people smiling and we are always laughing and trying to be funny in the band. And this album, for some reason is very positive and I wonder if this is because the world is fucked but somehow... this colourful, positive, blustering record comes out. No idea why.

Gregg Houston directs a poignant promo for Remember Summer on the meaning of loss.

Attawalpa teams up with wife Lena Dunham once again, creating the idiosyncratic promo for his song …

Maty Noyes is the vampire dreaming of a life in the sun, in Ian Rowe's engaging promo for …